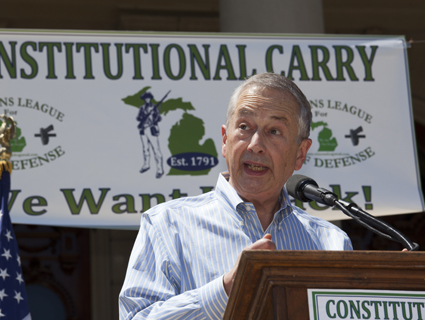 Here’s the first right-wing conspiracy theory about the shootings that killed 12 people and injured dozens more at a midnight screening of the latest Batman movie in Aurora, Colorado, over the weekend.

All indications from the Aurora Police Department are that Batman gunman James Holmes acted alone, for reasons that have yet to be established. But Larry Pratt—the president of Gun Owners of America, a far-right Second Amendment group that’s backed by prominent people like Sen. Rand Paul (R-Ky.)—has a different theory. Pratt believes the timing of Holmes’ rampage, which left 12 people dead and 58 wounded, seemed designed to coincide with the upcoming negotiation of the United Nations Small Arms Treaty. A press release sent out to radio bookers on Tuesday advertising Pratt’s availability noted that, “In an article posted at The New American…one expert even outlined a theory that Holmes didn’t act alone, but was possibly ‘enlisted’ to carry out his violent act.” Pratt, the publicist stated, was free for interviews on Holmes’ “impeccable” timing.

The email sources the claim to a blog post by a writer for the New American, the official publication of the John Birch Society—which, in turn, directs readers further down the rabbit hole to a website called Natural News, which breaks it down:

All this looks like James Holmes completed a “mission” and then calmly ended that mission by surrendering to police and admitting everything. The mission, as we are now learning, was to cause as much terror and mayhem as possible, then to have that multiplied by the national media at exactly the right time leading up the UN vote next week on a global small arms treaty that could result in gun confiscation across America.

…In other words, this has all the signs of Fast & Furious, Episode II. I wouldn’t be surprised to discover someone in Washington was behind it all. After all, there’s no quicker way to disarm a nation and take total control over the population than to stage violence, blame it on firearms, then call for leaders to “do something!” Such calls inevitably end up resulting in gun confiscation, and it’s never too long after that before government genocide really kicks in like we saw with Hitler, Stalin, Pol Pot, Mao and other tyrants.

(Emphasis theirs.) This is total baloney, both because Holmes acted alone according to every report we have, and because the United Nations Small Arms Treaty that Pratt and Co. are so concerned about doesn’t exist. The treaty is still in the drafting stage, it’s not supposed to focus solely on small arms, and, as I reported last summer, Secretary of State Hillary Clinton has actually taken steps to ensure that any version of the treaty wouldn’t infringe on American interests. Besides, even if President Obama did sign off on a massive United Nations power grab, there’s still the Senate.

Gun Owners of America is a fringe group. More mainstream groups like the National Rifle Association tend to stick to more mainstream conspiracy theories—like that Obama is secretly pushing lax gun laws as part of a “massive Obama conspiracy” to ban guns altogether.