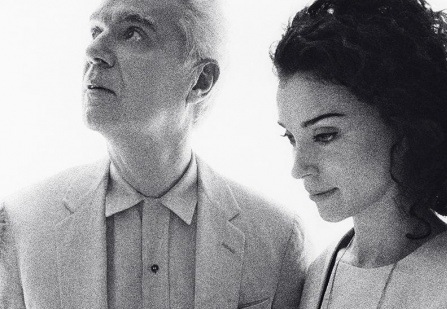 Nearly three years ago, Talking Heads frontman David Byrne and St. Vincent’s Annie Clark agreed to play a benefit show together in New York; by the time they were done, they were plotting a collaborative album. Clark told Pitchfork “I think I’ve reached the pinnacle of who I want to work with,” and indeed, it’s hard to think of a more exciting combination of artists. Byrne’s music tends to be more overtly bizarre, while Clark’s demure appearance and lovely voice give temporary cover to the creepiness in much of her music, but both traffic in finding the strange in the mundane via sophisticated, often surprising lyrics and intricate arrangements of sound. So a collaboration made perfect sense. The album cover, released months ago, featuring the artists stiffly posing in formal black-and-white attire with distorted facial features and unnaturally protruding bones, hinted at the grotesque beauty contained within.

The first single, “Who,” released over the summer, gave another clue to what to expect, opening brassily with saxophones and tuba before segueing into a jagged, slightly discordant beat. It’s a great initial showcase for the partnership, juxtaposing Byrne’s abrupt, sharply punctuated, occasionally yelped, sometimes-grunted lyrics with Clark’s breathily trilled vocal interludes. (The video, which cleverly evokes Night of the Living Dead, is well worth watching, if only for the fun of watching the pair jerk-dance their way down a road.)

While both artists are audibly present on nearly all of the songs, most have a clear lead: The ones Byrne sings sound like Talking Heads songs (I mean this as a comment on a much-anticipated return to form rather than a jab about originality), while Clark’s are harder to pin down, showcasing her incredible versatility over a range of styles. On the lovely, subdued “Optimist,” her clear voice rings out Panglossian platitudes—”How it is is how it ought to be”—over a burbling background interspersed with arpeggios, while on “Lightning” she glowers across sultry guitars; on “Weekend in Dust,” her vocals start off smooth and languid but grow increasingly sharp and jittery, with flashes of Karen O, all over a cool, brisk beat.

The two are in top songwriting form, lining melodically complex songs with evocative descriptions and provocative tongue-in-cheek pronouncements. Horns are employed in most songs to great effect, albeit in strikingly different forms: In the gorgeous “Dinner for Two,” they are by turns elegaic and radiant, and the lyrics gradually reveal some sort of dinner party crisis and meditate on people’s reactions: “Harry’s gonna get some appetizers/Now he’s keeping out of range of small arms fire/Vera has a phone she says is working/Now she’s crawling on the floor across the kitchen.”

“The One Who Broke Your Heart” is upbeat despite its lyrical content, replete with a blithe-sounding Byrne and glossy horns supplied by the Afro-funk band Antibalas and neo-soul group The Dap Kings. (Read our interview with their awesome bandleader, Sharon Jones.) “A song is a road/A road is a face/A face is a time/and a time is a place,” Clark sings in “The Forest Awakes,” which incorporates gallumphing trumpet, tight drum rolls, and slightly abrasive guitar solos. “Lazarus” is a brilliantly bittersweet song that starts downtempo but builds steadily to a climax that’s never quite reached, mixing biblical references all the way. 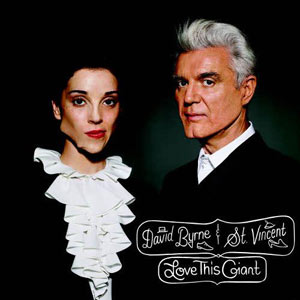 On the fittingly titled “Outside of Space and Time,” the horns, and the words, suggest a theme song for a 1980s sci-fi epic. Byrne sings, “We’ll join this cosmic saga/intergalactic matter/where we will meet tonight/spiralling out of sight/outside of space and time.” The sinister-sounding “I Am An Ape,” starts with the contemplation of a war hero’s statue, and then gets weird: “I am an ape/I stand and wait/a masterpiece/a hairy beast.” Is it meant to be a Planet of the Apes-style reveal, or a meditation on the animal nature of humanity? It’s hard to say. “I Should Watch TV” opens with an electronic, Nintendo-y beat before erupting into a glorious crescendo of horns; the lyrics borrow heavily from Walt Whitman’s Song of Myself.

I’m tempted to go on, but if I haven’t yet convinced you to check out this album, I sense I’m not going to. But I hope I have: Love This Giant is a tremendously rich, eclectic album that doesn’t stand still for a minute. Every song is packed with references, sounds, ideas, precisely chosen words—and yes, those glorious horns. If you like Talking Heads or David Byrne or St. Vincent, I suspect you’ll love it. On the other hand, to quote a friend, “If you don’t particularly care for David Byrne and also you don’t particularly care for St. Vincent, well then I have to admit your tastes are an enigma to me.”