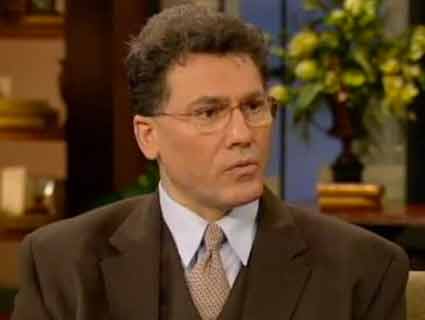 On Friday afternoon, just a few hours after GOP vice presidential nominee Paul Ryan had addressed the Values Voters Summit in Washington, DC, attendees of the annual social conservative confab heard from a speaker by the name of Kamal Saleem. A self-described “former terrorist,” Saleem came onstaging waving a miniature American flag and whipped the crowd into a frenzy, warning of creeping Shariah and appeasement—if not outright sympathy—from the Obama administration.

This is standard fare. Saleem, a Lebanese-born evangelist, has made a career out of speaking to Christian groups about his experiences with the Muslim Brotherhood in the 1970s and ’80s. He claims to have been worked, at various points, for Saddam Hussein, Muammar Qaddafi, and Yasser Arafat, not to mention Saudi terrorists in Afghanistan. In 1979, he says he traveled to the United States on the terrorists’ dime to build sleeper cells for the inevitable jihadist takeover, before—miraculously—finding the light and converting to Christianity.

But as I reported in a piece for the magazine last spring, much of Saleem’s story doesn’t add up. California police have no record of an incident he describes vividly in the first chapter of his book; the FBI says it has no record of meeting with him. And those who knew him before he began traveling the country under a stage name say they have serious doubts about huge portions of his narrative. Wally Winter, a former roommate during the period Saleem purports to have been grooming terrorists, told me, “He could sell swampland in Louisiana. I really do not believe the story about the terrorism.”

Saleem refused to respond to a detailed set of questions for that story, though. In fact, he almost never talks to reporters. And so, after sticking around for a 30-minute book-signing, I, along with Michelle Goldberg of the Daily Beast, decided to ask him about his past.

He’d mentioned being interrogated by intelligence agencies after confessing to his life of terror. Did any criminal investigations come out of that?

But what about the people he recruited?

“The investigation was all over, and they validated everything. There was not one thing wrong that I did against this nation to kill, to harass, to destroy, to bomb, to butcher.”

Who, Goldberg asked, was arrested abroad as a result of the information he gave to American intelligence?

“I could not tell you because that would map who I was, what I am, where my family—my family can be killed if I put all this. So I hope you don’t jeopardize my Lebanese family.” He looked up, incredulously. “You’re writing that down, what I just said?!”

Saleem goes to great lengths to explain that he must guard his identity closely. The problem with Saleem’s plea is that everyone already knows who Kamal Saleem is—or at least they can find out pretty easily. His real name, Khodor Shami, is readily available in media reports and on the 990 forms of the nonprofit he publicizes at every opportunity. He lives in Colorado Springs, according to both his publicly available LinkedIn profile and White Pages. Under oath last year, he told the Michigan legislature that there is a $25 million bounty on his head by the Muslim Brotherhood, which—in the event that he was telling the truth—means that whoever it is Saleem’s afraid of already knows exactly who he is, where he came from, and what he’s done. Of course they would; they were his old employers.

Saleem had once talked about playing football for the University of Oklahoma under famed coach Barry Switzer—even going so far as to brag about kicking a game-winning field goal for the Sooners. (None of these things were true.)

I asked Saleem about Doug Howard, a professor at Calvin College, a private Christian school in Michigan, who in 2010 penned a lengthy debunking of his narrative for the Evangelical magazine Christianity Today. For his story, Howard spoke with former colleagues at Focus on the Family in Colorado, who raised doubts about Saleem’s conversion narrative, and described a history of tall tales. For instance, Saleem had once talked about playing football for the University of Oklahoma under famed coach Barry Switzer—even going so far as to brag about kicking a game-winning field goal for the Sooners. (None of these things were true.) It was Howard who first pointed out that “Grand Wazir,” the prestigious Pope-like title Saleem claims an ancestor had held, is not a real title in Islam.

But Saleem didn’t flinch. “He’s related to a special group called the Muslim Brotherhood, and he works with them, he went to DC, he was with CAIR,” he said.

I mentioned that Howard is a Christian, which makes him an odd fit for the Brotherhood.

“So? He’s a professor of history. Islamic history professor, and he’s writing on what? On Islamic history glory. So the group he’s with, there are different groups. He rallied with them in DC, and he invited an Iranian radical to Calvin University. They spoke right there.” That Iranian radical, it turns out, was Reza Aslan, who in addition to being an American citizen raised in the Bay Area, is famous mostly for suggesting that democracy is a useful weapon against terrorism.

(“I don’t know what to say! Maybe I should add that to my faculty web page,” joked Howard in an email, adding that as part of his semester in DC, he took students to meet with the US Conference of Catholic Bishops, AIPAC, the Mennonites Central Committee, and, yes, one trip to a mosque.)

It was around this point that Saleem remarked that the interview was starting to feel like an “interrogation.” Which reminded me of something: In his speech, he’d described advising law enforcement and intelligence agencies on Islamic terrorism, but he hadn’t given any more specifics. The only agency mentioned in his book is the FBI, and a spokeswoman for bureau’s public affairs division had told me she had no record of any such a meeting. “I was wondering,” I asked, “which law enforcement agencies and intelligence agencies you’ve worked with?

“The majority of them,” he said. “It was in Homeland. There were a whole batch of them.”

“Whole batch of them. All of them. Homeland.”

That’s a lot of agencies.

Curious, I asked where and when the panel had been held.

“I can’t tell you that,” Saleem said.

“It can tell you where I was living and everything,” he said. “You see you don’t understand that you can jeopardize somebody’s life. Because to you it’s a story, but to me it’s life.”

It’s tough to square Saleem’s carefully guarded narrative with the public life he’s chosen. He wrote a book detailing a life of international terrorism and crime, describing terrorist camps in the Libyan desert and helicopter attacks in Tora Bora. He has no virtually no security at the Values Voters Summit—in his book he describes traveling with a phalanx of well-trained guards—and he’s even on tour with two of his children, who are helping out with the book sales. That’s despite the fact that he fears something terrible will happen if their identities ever become known. His public schedule, which is packed, is public record for months in advance.

If he were a man on the run, it’s the future he should be concerned about. But it’s the past that Saleem doesn’t want to talk about.

*Update: This isn’t quite true. Saleem told the Michigan legislature under oath that he had smuggled weapons across the border through Canada.