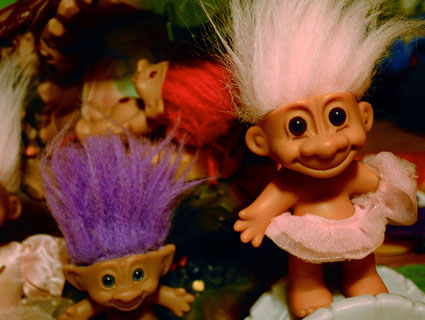 Last week, Gawker exposed the identity of Violentacrez, a.k.a. Michael Brutsch, a notorious Reddit troll with a penchant for posting sexualized images of underage girls, and moderator or creator of numerous racist, pornographic, and generally disturbing subreddit groups—including one dedicated to the sharing of furtive photos of unsuspecting women in public. Brutsch has since been fired from his job, and many of his online defenders are outraged that the exposé broke a cardinal rule of Reddit: It “doxed” a site user, revealing his personal information. This camp sees doxing as an attack on the structure of Reddit itself, a community that thrives on the freedom of anonymity.

In his latest book, Hacking the Future: Privacy, Identity and Anonymity on the Web, author Cole Stryker explores many facets of Web anonymity, including the malicious exploits of trolls. Stryker—who took on the hacker group Anonymous in his last book—argues that anonymity is fundamental to a free society and dedicates his book to the “often anonymous geniuses—the phreaks, geeks, hackers, crackers and punks,” whom he credits with making the Internet “the potent tool for individual freedom and self expression it has become.” But should his defense of anonymity still apply to those who post creepshots of unsuspecting women and underage girls?

Cole Stryker: [Laughs.] Everyone has been asking me that lately. It is my real name. Since I was writing about anonymity, my publisher and I joked about writing under a name like John Smith or something average like that.

MJ: In the book, you argue that anonymity and free speech are virtually inseparable, but upholding the right to anonymity means enabling the occasional prankster. Given the situation at Reddit, is that just something we have to deal with to maintain free speech?

CS: There are a couple things to consider. I fully support Reddit administration doing what they can to mitigate this kind of activity. It doesn’t sound like they are doing a whole lot right now. They try to take a sort of self-policing philosophy, rather than top-down moderation. And sometimes that manifests in a freer discussion. Other times it results in stuff like this. If Reddit really wants to be the “Front page of the internet,” they are going to have to institute some more stringent moderation. The other thing is that on the broader Internet, the only way that you could remove this kind of content would be some kind of draconian legislation enabling people to trace everything you do online. As you know, I oppose that, largely because I feel that it would be ineffective in preventing bad people from doing bad things. So evil-doers will continue to do evil, and the rest of us will be slightly less free in the process.

MJ: How widespread is the troll problem?

CS: This kind of stuff is not unique to Reddit. Swapping photos of unsuspecting women has been happening on Flickr for eight years, and it’s been happening on various forums and underground sites that don’t have any kind of moderation at all for decades. It’s not going to go away. Outing this guy—I think it’s great that so much attention was brought to this issue, because I think this kind of behavior needs to be shamed from the hilltops. Publicly shamed. And I’m glad to be seeing it get this kind of attention, but a victory was not achieved. All this guy is going to do is move to a different platform and continue posting porn.

MJ: What has been your personal experience with trolls?

CS: Personally, the trolling I’ve experienced was super mild. I think that Anonymous lost interest in me after a few weeks of my [previous] book release, because I sort of knew what was coming, and it’s a lot less fun to troll someone who knows the tactics and understands the risks and can kind of watch it unfold like you’ve seen it a thousand times before. There’s a reason why people writing about Anonymous extensively typically aren’t getting trolled the way that 14-year-old girls and middle aged people do: because it’s way more fun to trick someone who has no understanding of how the internet works and respond with impotent threats.

MJ: What is the worst trolling you’ve ever seen?

CS: There was a child safety expert, Parry Aftab, someone who gets trotted out on Good Morning America every time there is a cyber-bullying scandal. Anonymous found out where she lived, and they used a piece of software that would forward a phone call through her home phone number and make it look like she was making a distress call from inside her house, and then a SWAT team shows up and kicks down her door throws smoke grenades, and no one is there but her poor cat. That’s the kind of stuff that freaks you out. All it takes is one psychopath to follow through on one of these death threats.

MJ: What do you say to the 14-year-old girl whose pictures have been taken and posted on Reddit, and to parents who are getting calls from teens pretending to be their dead children?

CS: At the point where something is repulsive and the death threats and other unwanted advances are trickling in, my advice would just be to get offline for a while. Delete your accounts. Make it as difficult as possible for them to reach you in that way, and almost always these things will blow over. The best thing you can do is sort of a scorched earth policy. Delete everything, and maybe next time you get online, use a pseudonym or make sure you lock down your Facebook account so only friends can see your stuff. It doesn’t sound like a perfect solution, because you’re basically telling women that they can’t be as free to express themselves online as men can. I understand why that seems like a crappy solution to the problem, but I’m afraid that it’s the only realistic one, considering that this is the way the world works, unfortunately.