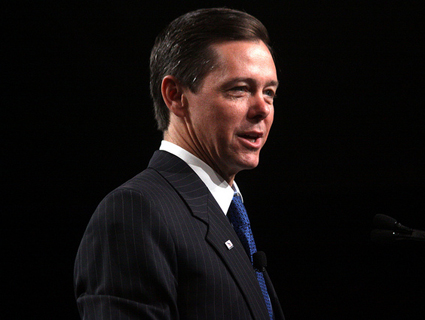 Last week, Mother Jones reported on a controversial mailer from the Faith and Freedom Coalition, an evangelical Christian group run by veteran political operative Ralph Reed. The flyer, which was sent to potential voters, asked recipients to compare President Barack Obama’s policies to the threat of Nazi Germany and Japan circa World War II. It also accused Obama of having “Communist beliefs.” Reed is no bit player: The former head of the Christian Coalition (who played a part in the Jack Abramoff corruption scandal), he’s leading a massive, multimillion-dollar effort to turn out evangelical voters for Mitt Romney in November.

But wait—Reed’s Obama flame-throwing doesn’t end there. That Faith and Freedom Coalition mailer also included 10 more pages of inflammatory, debunked, and malicious rhetoric, a right-wing grab bag of Obama hatred. In this letter to potential voters, Reed claims that Obama wants an America where “government bureaucrats micromanage every aspect of your life,” the taxman “seizes most of what you earn,” and death panels—yes, those fictional death panels—determine whether you live or die. Reed insists that Obama will destroy capitalism and replace it with “Socialistic economic theories.”

Here’s the most inflammatory line: If Obama wins reelection, “he can complete America’s destruction.” This warning, naturally, is presented in bold print.

Does Reed truly believe Obama is bent on the ultimate destruction of the nation? An FFC spokeswoman declined to respond to requests for comment.

The Faith and Freedom Coalition letter, which was mailed out in recent weeks, echoes Romney’s “47 percent” comments, as revealed by Mother Jones. In this case, though, Reed’s group says 45 percent of the electorate is comprised of Obama-voting government leeches. “That’s Obama’s base,” the letter says. “And he expands his base by creating more dependents on government.”

Reed, once hailed as the “Right Hand of God” on the cover of Time magazine, founded the Faith and Freedom Coalition in 2009. And his group is important for Romney. In 2008, 26 percent of all voters identified themselves as evangelicals or born-again Christians. Romney, a Mormon, is hardly an evangelical darling: He trailed Newt Gingrich and Rick Santorum among evangelicals throughout the Republican presidential primary fight.

The 2012 elections mark Reed’s full return to presidential politics after being ensnared in the Abramoff affair. Reed, a friend of Abramoff’s for decades, fell out of favor with the GOP establishment after it was revealed Abramoff had directed money to Reed through his Indian casino clients in party for work Reed did trying to block casinos that would’ve competed with clients of the disgraced Washington lobbyist.

Reed’s get-out-the-vote goals are impressive. As the New York Times reported, the Faith and Freedom Coalition hopes to contact some 17 million conservative voters before Election Day. FFC will deploy more than 5,000 volunteers and will distribute 25 million voter guides to members of 117,000 churches nationwide. The Faith and Freedom Coalition is one of many groups funded by “dark money” and active in the 2012 presidential race; as a 501(c)(4) nonprofit, Reed’s outfit does not have to disclose its donors.

Here are a few excerpts from Reed’s letter to voters:

Obama will “micromanage every aspect of your life,” demand the IRS seize “most of what you earn,” and replace capitalism with “Socialistic economic theories.

On the handout-grabbing, non-tax-paying 45 percent who will “vote for Obama almost no matter what”:

Read the Faith and Freedom Coalition’s full letter to voters: