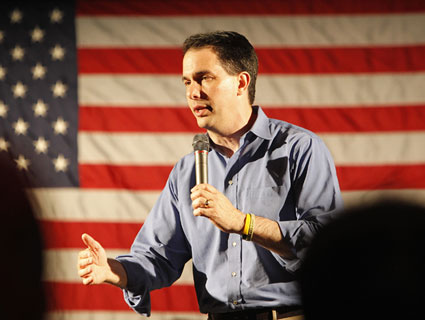 The tens of millions of dollars that Wisconsin Gov. Scott Walker raised for his June recall election weren’t the only reason Walker won. He was also buoyed by a massive get-out-the-vote operation run by state Republicans, the Republican Governors Association, and outside players like Americans for Prosperity. Together, these right-wing groups reached millions of voters.

Now, Walker says that the political machine built by Republicans for the recall will boost the Romney-Ryan ticket in Wisconsin, potentially delivering the state’s 10 electoral votes. “You take all the work that was done earlier this year, when we made four-and-a-half million voter contacts in a state of 5.7 million,” Walker said on Fox News on Friday morning. “We had tens of thousands of volunteers help us in my election earlier this year. That excitement continues on.”

Wisconsin was never considered a lock for President Obama in the 2012 election, but big investments in the state by the Romney campaign and its allies and also the selection of Wisconsin native Rep. Paul Ryan as the vice presidential nominee have nudged this light-blue state towards the center. Now Romney’s campaign, the pro-Romney super-PAC Restore Our Future, and other conservative groups have poured millions into ads to try to finish the job. That spending, along with a burst of enthusiasm after Romney’s strong showing in the first debate, could push Romney toward victory next Tuesday, Walker claimed. “After that first debate in Denver, we saw an increase in the polling and, equally as important, we saw an increase in the number of volunteers in our victory centers after the just tremendous performance that Mitt Romney gave,” Walker said.

Make no mistake: Democrats used the unsuccessful effort to recall Walker as a way to grow their ranks, sign up volunteers, and bulk up their voter datasets. The labor-funded We Are Wisconsin coalition signed up 50,000 volunteers for the Walker recall. Those volunteers knocked on 1.4 million doors and called 1.5 million eligible voters in the 96 hours before the election urging Walker’s ouster. Recent internal polling done by the American Federation of State, County, and Municipal Employees union found that 69 percent of AFSCME members supported Obama, a slight uptick from 68 percent in 2008. “AFSCME members know who attacked them, and they know that Mitt Romney and Paul Ryan were cheerleaders” for Walker and other anti-union officials, AFSCME spokesman Chris Fleming said in a statement.

There’s also the Obama campaign’s vaunted ground operation, which is running at full bore in the Badger State. That grassroots machine helped Obama cruise to a 14-point win in Wisconsin in 2008. RealClearPolitics’ polling average shows Obama with a 5 percentage point lead, and polling guru Nate Silver gives Obama a 91 percent chance of winning Wisconsin. Conservative money—and Walker’s network—might not be enough to deliver the state for Romney.