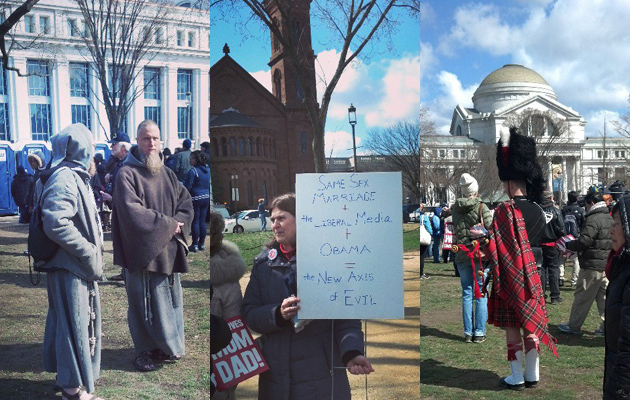 Ruben Diaz, a 69-year-old Democratic state senator from the Bronx, was one of the best-received speakers at the National Organization for Marriage’s March for Marriage on Tuesday in Washington, D.C. His message, shouted out in two languages (with a sidekick yelling the English), was fairly succinct:

You get the picture. Diaz is the Edith S. Childs of the anti-equality movement.

Though NOM’s rally features the loud music and chants of a pep rally (also: bagpipes, grown men dressed like Buckingham palace guards, and dudes wearing red sashes), it has a different vibe: that of coping. With public opinion swinging wildly in favor of marriage equality, dozens of politicians in both parties following suit, and the Supreme Court poised on the brink of one (if not two) landmark decisions, the once dominant campaign against gay marriage is up against the ropes. Even a majority of young Republicans now believe same-sex marriage should be legal. The movement that conservative columnist George Will noted is “literally dying” decided to hold its rally in front of the Museum of Natural History—just a few paces, that is, from actual fossils.

NOM is attempting to convince its political allies, the media, the public, and perhaps itself that, despite appearances, it has been a good year for the anti-equality movement—that its argument is still a winning one.

On the National Mall, this happened in several stages. The first was grief. Diane Hess of Maryland was standing stage left with a sign that left little room for ambiguity. “Same sex marriage + the liberal media + Obama = the new Axis of Evil.” From her perspective, the nation is totally screwed. “I do see us in a worse place, in a more godless place in 20 years,” she said. Same-sex marriage is here, and it’s only the beginning. “There is going to be a persecution of the Christian church.” Sarah Stites, a student at Grove City College and one of the few actual young people at a rally was only a bit more bullish. “It seems to be heading that way,” she said, when I ask about marriage equality. “I feel like people my age aren’t getting all the information. They’re being swayed by the media.”

“Eventually there is gonna be a backlash,” she remarked, “but I do think think we’re going in the direction of same-sex marriage.”

The second stage was doubt. As this line of thinking goes, everything you’ve been told about support for marriage equality should be questioned. “The Field Poll only said there was [38] percent support for traditional marriage,” said NOM president Brian Brown, referring to a poll of Proposition 8 in California. “And guess how that turned out!” (Never mind that the survey was taken five years ago.) Martha Marsh of Maryland told me much the same thing: “First of all, I don’t think the majority of Americans are behind same-sex marriage—I think a lot of politicians are for it.” Wei Feng, who drove down from Rochester, New York, with his two daughters for the march on the Supreme Court, insisted that there’s a “silent majority” that still opposes marriage equality. They’ll speak up; just give them time.

The last stage of coping set aside the skepticism entirely and fixated on a fact-free assertion: young people really are on our side. “They are perpetually telling you in the media that young people are supporting same-sex marriage,” Brown said at one point. “I’m gonna tell you something: That is not true.” Never mind that the Pew study last week found that 70 percent of adults born after 1981 support marriage equality. Brown had something more powerful than a scientific survey: an anecdote. That is, a child: Grace Evans, an 11-year-old from Minnesota who became the next great hope of the anti-equality movement earlier this month when she testified before the Minnesota legislature in opposition to same-sex marriage. Evans, after explaining why her parents were awesome, posed a question to the lawmakers: “Which parent do I not need—my mom or my dad?”

On Tuesday, Brown showed a two-minute video of Evans’ testimony on the big screen. When the audience had settled down, he got to the point: “The next time someone tries to intimidate you or they call you a name because you oppose gay marriage, think about that 11 year-old girl.”

Just try not to think of all the others.