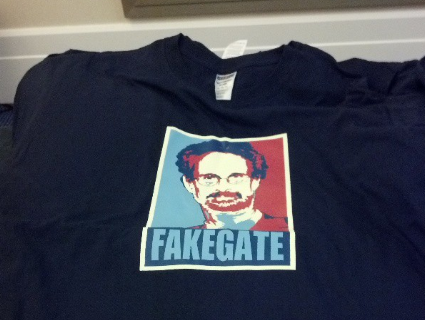 Walter Cunningham—a former Apollo astronaut and Marine fighter pilot who now gives talks about climate change for the conservative Heartland Institute—can only find one piece of evidence to support the view, held by 97 percent of climate scientists, that the Earth is getting warmer. He moves to the next slide on his Powerpoint presentation at the Conservative Political Action Conference (CPAC) and the audience of about three dozen or so activists bursts into laughter.

It’s a chart tracking the shrinking size of undergarments, from last century’s long johns, to the 21st century’s thongs.

Climate scientists, Cunningham suggests, are simply conflating correlation and causation—something he helpfully illustrates by charting rising global temperatures and the number of pirates worldwide. (They track pretty closely!) But his fellow panelists at Friday’s breakout session, “The Right Climate Stuff,” don’t even go that far; Thomas Wysmuller, whose credentials include a degree in meteorology and a five-year internship at NASA, talks up icy winter temperatures in Moscow and Siberia as evidence the Earth isn’t warming at all. Harold Doiron, a former rocket scientist who by his own admission has “only been a serious student of global warming for maybe two years,” suggests we’re making a big fuss about nothing.

“If sea level’s rising, it’s not a global problem,” Doiron says. “It’s not happening in the Rocky Mountains.” (Sorry, Tuvalu.) Besides, he says, even if carbon dioxide were a problem, it’s simply not in the United States’ best interests to take action unilaterally—not when China is refusing to get on board. The reports that China is actually moving ahead with a carbon tax haven’t made it to National Harbor, Maryland. Maybe they use Google Reader.

That none of the panelists critiquing climate science have any professional training in climate science isn’t lost on the group. But lack of qualifications is itself a qualification at CPAC. Recommending another book that purports to debunk climate science, Doiror talks up the author thusly: “John is not a climatologist…He works in the semi-conductor industry.” Doiron’s own conclusions on the shortcoming of climate science rely on, in his words, “proven data analysis processes used in astronaut safety-critical situations.”

But on one thing, everyone seems to agree. “This is a controversy that should not be resolved in the court of public opinion or the political arena,” Cunningham told his audience. Instead, it should be resolved in the scientific community. Wise words—although perhaps there’s a better messenger than a retired astronaut at a political confab.