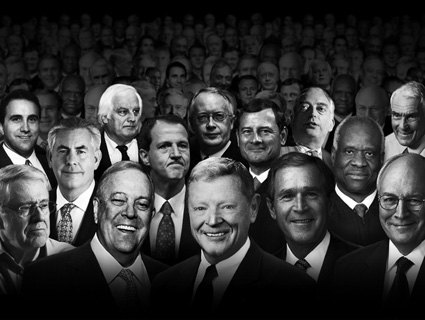 If there’s one thing that the new film Greedy, Lying Bastards succeeds at is making the viewer want to shout expletives at the screen. But it’s not always for the reasons filmmaker Craig Scott Rosebraugh intended.

The documentary, which opened in theaters last Friday, looks at the money flowing between energy Goliaths like ExxonMobil and Koch Industries, their PR agencies, and the politicians who, in the face of overwhelming scientific evidence of calamitous man-made climate change, have managed to block carbon emission regulations. It demonstrates that for more than 20 years, these titans of Texas tea and their lackeys have systematically derailed the discourse on climate change, employing the politics of subterfuge to keep major environmental regulations off the table.

With some nifty flow charts showing the channels of money and influence, and awesome (not in the “bad-ass” sense, but more in the “biblical, wrath of God, poop your pants sense”) footage of storms, wildfires, floods and the destruction they wreak, the film makes it clear that manmade climate change is not just a theory; it is already upon us. To hammer the point home, the filmmakers go to the extremes: First they visit Kivalina, Alaska, where the ice that normally protects the Arctic island beaches from erosion has melted away, forcing the inhabitants to abandon their homes and way of life. (Last year the Kivalinans lost a lawsuit against coal, oil, and power companies that they blamed for the need to uproot their entire village). Then the filmmakers headed to Tuvalu, a Polynesian Island that scientists predict will soon be completely submerged due to rising sea levels spurred on by climate change.

The “greedy, lying bastards” they refer to include prominent skeptics like Sen. Jim Inhofe (R-Okla.) and Lord Christopher Monckton, who blame the rising temperatures on the off-gassing of undersea volcanoes, or sun flares, or any number of arguments that would get a person laughed out of a science symposium.

“Climate change is…?” “BULLSHIT” said Lord Monckton, instigating a call and response with a crowd. See? Really makes you want to start cursing.

The film shows that all of these glorified carnival barkers have been paid handsomely to cloud the climate debate in confusion. Dr. Pat Michaels, a scientist at libertarian think tank the Cato Institute who is frequently trotted out on Fox News to call climate change a hoax, has admitted that 40 percent of his income comes from the oil industry.

Rosebraugh, a career activist, succeeds at getting the viewer spitting mad, but sometimes it’s less about the subject matter than it is about the maladroit way he presents his argument. The film is not without flaws, some of which are pretty significant. It gets a little OTT with the footage of smarmy, Big Oil-backed politicians joking about President Obama’s plan to slow the rise of the oceans, smash cut to shots of despondent families picking through the remains of homes incinerated in climate change-fueled wildfires. It’s also problematic that much of the data Rosebraugh employs comes from the activist group Greenpeace, rather than a more neutral source. And frankly, calling the Koch Brothers and their cronies names doesn’t really serve any purpose other than to dumb the debate down even more.

Rosebraugh does deserves credit for helping to illuminate the problems caused by money’s influence over politicians, especially in light of the news last week that a major part of the Keystone XL environmental report was written by consulting firms with ties to the Koch Brothers, ExxonMobil and other oil companies that may have a direct financial stake in the pipeline. Shining the light on where the money is flowing—from the tar sands fields of Alberta to the Corpus Christi refineries—is a more powerful argument without the snide commentary. Trying to up the ante on the name calling—even if the SOBs really deserve it—will not solve any of the problems.