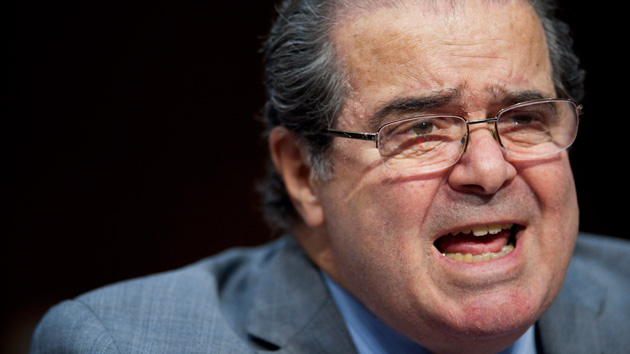 Editor’s note February 16, 2016: Supreme Court Justice Antonin Scalia was found dead on Saturday, February 13, at a ranch outside Marfa, Texas. His many reflections on homosexuality formed a notable part of his judicial legacy. This story was published in March 2013, as the court prepared to hear historic gay rights cases.

Justice Antonin Scalia has written that “it is our moral heritage that one should not hate any human being or class of human beings.” Judging by the things he has said in court or written in his legal opinions about gays and lesbians, he doesn’t really mean it.

On Tuesday and Wednesday, the Supreme Court will hear oral arguments over whether the Defense of Marriage Act and California’s ban on same-sex marriage are constitutional. Despite Scalia’s long public history of expressing revulsion and contempt for gays and lesbians, on the subject of whether people of the same sex should be allowed to marry, he is among the nine people whose opinions will really matter. Here are the lowlights of Scalia’s anti-gay comments:

What’s a little frat-boy humor between justices? In 2003, during oral arguments in Lawrence v. Texas, the case challenging a Texas law that criminalized homosexual sex, Scalia came up with a tasteless analogy to illustrate the issue. “[S]uppose all the States had laws against flagpole sitting at one time, you know, there was a time when it was a popular thing and probably annoyed a lot of communities, and then almost all of them repealed those laws,” Scalia asked the attorney fighting the Texas law. “Does that make flagpole sitting a fundamental right?”

In his dissent in Lawrence, Scalia argued that moral objections to homosexuality were sufficient justification for criminalizing gay sex. “Many Americans do not want persons who openly engage in homosexual conduct as partners in their business, as scoutmasters for their children, as teachers in their children’s schools, or as boarders in their home,” he wrote. “They view this as protecting themselves and their families from a lifestyle that they believe to be immoral and destructive.” Some people think obesity is immoral and destructive—perhaps New York Mayor Michael Bloomberg should have imprisoned people who drink sugary sodas rather than trying to limit the size of their cups.

In his dissent in the 1996 case Romer v. Evans, which challenged Colorado’s ban on any local jurisdictions outlawing discrimination on the basis of sexual orientation, Scalia brought out an analogy that he’s used to attack liberals and supporters of LGBT rights for years since. “Of course it is our moral heritage that one should not hate any human being or class of human beings,” Scalia wrote, in the classic prebuttal phrasing of someone about to say something ludicrous. “But I had thought that one could consider certain conduct reprehensible—murder, for example, or polygamy, or cruelty to animals—and could exhibit even ‘animus’ toward such conduct. Surely that is the only sort of ‘animus’ at issue here: moral disapproval of homosexual conduct[.]” It’s true that people generally disapprove of murder, but there’s more going on in laws banning murder than mere disfavor—the rights of the person being murdered, for example.

…And like laws banning child pornography, incest and bestiality

Scalia decided to take the “moral disapproval” argument up a notch in his dissent in Lawrence, writing that the Texas ban on homosexual sex “undeniably seeks to further the belief of its citizens that certain forms of sexual behavior are ‘immoral and unacceptable,'” like laws against “fornication, bigamy, adultery, adult incest, bestiality, and obscenity.” Scalia later tees up “prostitution” and “child pornography” as other things he thinks are banned simply because people disapprove of them.

Not content to analogize laws singling out people on the basis of sexual orientation to laws banning murder, Scalia suggested in his dissent in Romer that the relationships of same-sex partners were comparable to those of roommates. “[Colorado’s ban] prohibits special treatment of homosexuals, and nothing more,” Scalia wrote. “[I]t would prevent the State or any municipality from making death benefit payments to the ‘life partner’ of a homosexual when it does not make such payments to the long time roommate of a nonhomosexual employee.” Like his “flagpole sitting” comment, this remark goes far beyond the law in expressing Scalia’s basic animus towards same-sex couples, implying that what they experience together cannot even properly be considered love.

First they came for the Cubs haters…

Scalia’s dissent in Romer is a long lament over the supposed “special rights” being granted to people on the basis of sexual orientation. In one section, he complains that banning discrimination based on sexual orientation in hiring amounts to granting gays and lesbians special treatment that Republicans, adulterers, and Cubs haters don’t get. He writes “[A job] interviewer may refuse to offer a job because the applicant is a Republican; because he is an adulterer; because he went to the wrong prep school or belongs to the wrong country club; because he eats snails; because he is a womanizer; because she wears real animal fur; or even because he hates the Chicago Cubs.”

Have gays and lesbians tried NOT having homosexual sex?

During oral arguments in Lawrence, the attorney challenging the Texas law argued that it was “fundamentally illogical” for straight people to be able to have non-procreative sex without being harassed by the state while same-sex couples did not have the right to be “free from a law that says you can’t have any sexual intimacy at all.” But Scalia pointed out that gays and lesbians could just have sex with people of the opposite sex instead. “It doesn’t say you can’t have—you can’t have any sexual intimacy. It says you cannot have sexual intimacy with a person of the same sex.” Later on in his dissent, Scalia argued that Americans’ constitutional right to equal protection under the law wasn’t violated by the Texas law for that reason. “Men and women, heterosexuals and homosexuals, are all subject to [Texas’] prohibition of deviate sexual intercourse with someone of the same sex.” That should sound familiar: It’s the same argument defenders of bans on interracial marriage used to make, arguing that the bans were constitutional because they affected whites and blacks equally.

Scalia has been on a tear lately, calling the Voting Rights Act a “racial entitlement” and ripping into the president in a dissent on Arizona’s harsh anti-immigration law in the middle of an election season. But when it comes to LGBT rights, he’s been off the rails for a long time.