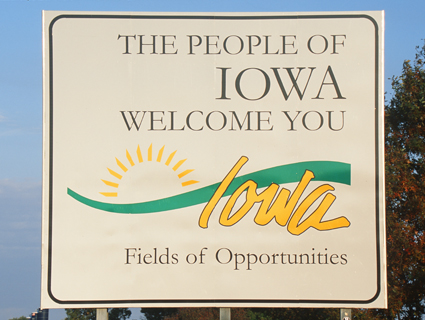 No one celebrates Earth Day quite like the Republican party of Iowa. On Monday, as environmental activists across the world called for increased attention (or any attention at all, as the case may have it) to the effects of anthropogenic climate change, state Rep. Dwayne Alons took to the floor of the state capitol to offer up a counterpoint: Climate change is awesome.

Alons cited a 2012 article in Global Change Biology on the impact of increased carbon dioxide levels on the growth of Greek fir trees:

There’s a man by name of Koutavas has come out with this report that basically says there’s a very positive indication that rising global CO2 is a good factor, not a bad factor, and we shouldn’t be fighting that. And to sum up of some of his words in his report and such observations in the words of Koutavas are most consistent with a significant CO2 fertilization effect operating through restricted stomatal conductance and improve motor use efficiency. And he also opines that if this interpretation is correct—and what other interpretation could there possibly be?—atmospheric CO2 is now overcompensating for growth declines anticipated from dryer climates suggesting its effect is unusually strong and likely to be detectable in other up-to-date tre-ring chronologies from the Mediterranean. There we have it: The increasing concentration of atmospheric CO2 as illustrated in the data I have before me, and the graph is quite significant, appears to be the most important factor driving recently enhanced growth rates of Greek fir trees, and it in spite of unfavorable moisture conditions and declining temperatures that should be causing growth declines. Not bad for a growth-promoting and life-sustaining molecule that some have incorrectly labeled a pollution. So let’s hear it for rising CO2 on Earth Day!

The study doesn’t actually say, as Alons suggests, that CO2 is a “good” thing or that we “shouldn’t be fighting that.” It’s simply looking at a near-term effect of CO2 on a specific population. Scientists are skeptical that tree growth will continue to keep pace with rising CO2 levels. And all is not well for Alons’ beloved Greek fir; he forgot to mention—or perhaps had no idea—that the species is in a continual decline due to, among other things, drought and air pollution.

Rep. Ralph Watts, who followed Alons on the floor, proposed Iowans observe Earth Day by honoring power plants. He suggested that legislators “leave our lights on all night long in celebration of Earth Day and recognition of those privileges we have.”