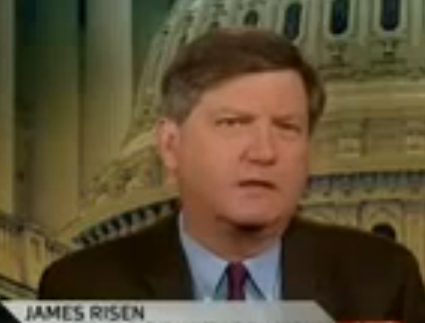 A US appeals court has ruled that the First Amendment does not protect New York Times national security reporter James Risen from revealing the sources that gave him information about the CIA’s plan to disrupt Iran’s nuclear program. Risen has been issued a subpoena by the Obama Administration to testify at the trial of former CIA officer Jeffrey Sterling, who allegedly leaked unauthorized information about the program.

In a 2-1 decision, the US Court of Appeals for the Fourth Circuit overturned a 2011 ruling by a lower court that Risen had journalist’s privilege to protect his sources. It also reaffirmed that the CIA can take special measures to hide the identity of current and former CIA agents who provide witness in the trial. Agents can hide their real names from the jury when testifying, and can take other security measures such as hiding behind ” a screen between the trial participants and the public seating section of the courtroom” or wearing “light disguises (wigs, false beards, half glasses.)”

The majority opinion said: “There is no First Amendment testimonial privilege, absolute or qualified, that protects a reporter from being compelled to testify by the prosecution or the defense in criminal proceedings about criminal conduct that the reporter personally witnessed or participated in, absent a showing of bad faith, harassment, or other such non-legitimate motive.”

The information in question is part of Risen’s 2006 book, State of War: The Secret History of the C.I.A. and the Bush Administration.  In it, he described the CIA operation against Iran’s nuclear program as poorly run and wrote that it potentially gave valuable information to the Iranians. Risen told The Times in 2011 that, “I am going to fight this subpoena…I will always protect my sources, and I think this is a fight about the First Amendment and the freedom of the press.”

In a dissenting opinion, Circuit Judge Roger L. Gregory agreed with Risen: “The majority reads narrowly the law governing the protection of a reporter from revealing his sources, a decision that is, in my view, contrary to the will and wisdom of our Founders.”

The Obama Administration indicted Sterling under the Espionage Act, a law it has wielded more than any other presidential administration. Critics of Risen’s subpoena say that forcing Risen to testify, and cracking down on a national security whistleblower, is setting an alarming precedent. “I think it’s possible we’re headed toward a genuine crisis, where a New York Times reporter is in jail for publishing the news,” says Steven Aftergood, director of the Project on Government Secrecy, a government watchdog group. He would like to the Obama Administration to withdraw the subpoena, but notes, “I’m not sure where things go from here. It’s hard for me to imagine Risen saying, ‘OK, I give up. Sterling was my source.’ Will he go to jail? I don’t know.”