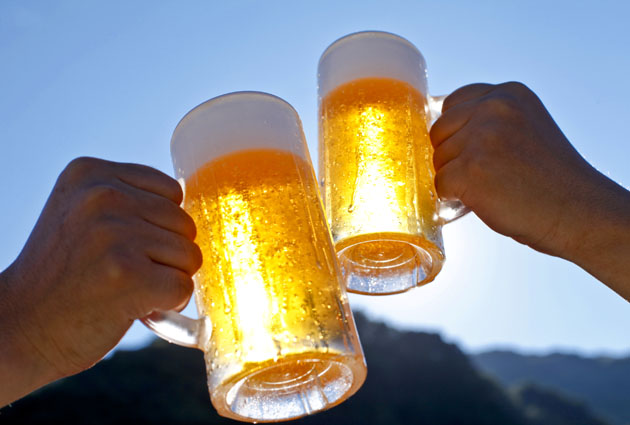 Beer lovers of America, you can breathe a sigh of relief. Michigan’s Bell’s Brewery won a decision against Enbridge Oil Thursday night that nixed a proposal the brewery claims would have shut it down for what could have been months. After almost five hours of deliberation, Comstock Township Planning Commission rejected Enbridge Oil’s plan to drop an oil cleanup dredge pad in the lot next to the brewery—and practically in the back yards of some 40 homeowners—and proved that there is still some lingering good in the world.

Just how did the makers of Michigan’s best known microbrews find themselves in a fight with one of the biggest oil companies in North America? The story starts in July 2010, when the Enbridge Oil pipeline near Marshall, Mich., ruptured, spilling more than 840,000 gallons of Canadian heavy crude into the Kalamazoo River in the largest overland oil spill in US history. Three years later, the US EPA estimates there’s still some 180,000 gallons of diluted bitumen clinging to the river bottom, and the agency has ordered the company to complete additional dredging. In July, when Enbridge plotted a holding site for the oil-contaminated muck, called a dredge pad, it stuck one next door to Bell’s main brewery—and that was something that Larry Bell, the brewery’s owner, wasn’t going to stand for.

“We were going to be downwind,” says Bell. “It was going to contaminate our ingredients. It was going to contaminate our employees—it would have put us out of production.” He filed a lawsuit in late July after work had already begun on the site and says he’s spent roughly $50,000 fighting for the site to be moved. According to a complaint filed by Township Supervisor Ann Nieuwenhuis in early July, “substantial work…occurred without Enbridge applying for and obtaining the necessary Township permits,” squelching locals’ chance to air their concerns. “Their M.O. is to set up next to people who can’t fight ’em,” says Bell. “They never bargained for setting up next to me.”

In March, the US EPA set a December 31 deadline for Enbridge to complete the dredging, and the company claims that this setback will make it hard for it to complete the work in time—especially when the agency has already denied a request for extension. “Not getting site plan approval tonight for (Comstock Commerce Park) does make it more challenging to complete that initiative by the timeline in front of us,” said Jason Manshum, senior advisor of community relations for Enbridge. “So now, we’ll go back and work with both federal and state regulators. Before any other action is done, we need to have those discussions at that level.” Two other dredge pad sites were approved on Monday.

At the meeting Thursday night, the township’s attorney Ken Sparks said that Enbridge had failed to provide the burden of proof that health and traffic concerns would be properly addressed. The nearby houses rely on well water, and residents were worried about possible contamination. “This is simply not appropriate at a site adjacent to 40 households,” said township commissioner David Burgess.

The Bell’s brewery is some 30 miles downstream from the original site of the spill, and according to Bell, “the spill was never supposed to get as far as us.” Effects have been seen as far as 40 miles from where the pipeline ruptured. “We’ve made Frankensoup there in the river,” says Bell. “I think we’re going to be dealing with this for a long time.”