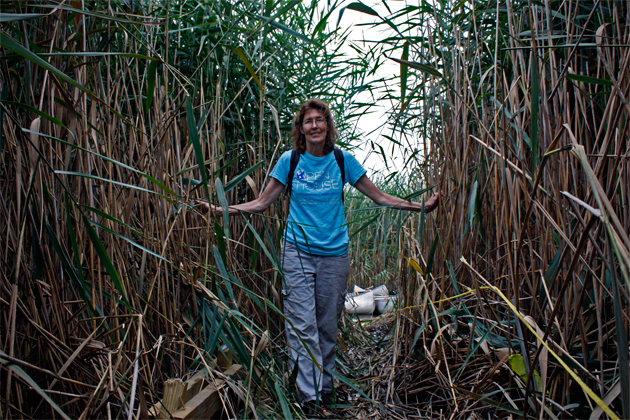 Piermont Marsh seems an unlikely place to learn about drought. This warren of narrow streams and muddy, reed-choked embankments clinging to the edge of the Hudson River twenty miles north of Times Square is the domain of crabs, worms, herons, and other water-loving creatures. But as Columbia University climatologist Dorothy Peteet paddles a narrow aluminum canoe deep into the marsh, she insists that buried deep in this black, sulphur-stinking muck are clues that could reveal when, and how badly, the nation’s largest city will next be struck by crippling drought.

Here, she says, “we can get these climate records that we can’t get anywhere else.”

Some climate researchers tap ancient air bubbles trapped in Arctic ice to read long-lost atmospheres; some slice open stalagmites in tropical caves to measure 100,000-year-old rainfall. Peteet is on the hunt for pollen. She dredges up mud from as deep as 45 feet underground and hauls it back to her lab at the nearby Lamont-Doherty Earth Observatory. There she boils, bakes, and filters it to sift out pollen, not much thicker than a human hair, from plants several thousand years old. The relative abundance and variety of different species indicate climate conditions at the time the pollen was dropped: An uptick of dry-weather species like hickory and pine points to drought. 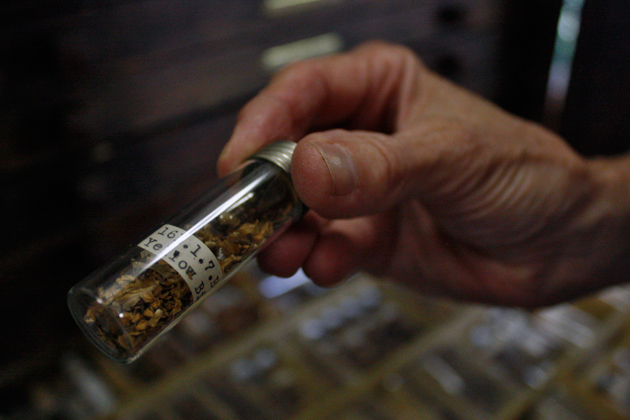 Pollen, and seeds like these, could shed light on how future droughts will impact New York City. Tim McDonnell/Climate Desk

Pollen, she says, “is a secure piece of the puzzle;” changes in the pollen record from the deepest, oldest mud layers to shallow, more recent ones paint a clear picture of climate-driven changes over time. And some of these changes are startling: In 2005, Peteet unearthed evidence of a 500-year-long drought that baked the New York City region from 800 to 1300 A.D., a time known as the Medieval Warming Period (because this ancient warming happened in an age before human greenhouse gas emissions, it’s become a favorite reference of climate skeptics; however, today’s temperatures are even warmer than then, and recent science indicates that the Medieval warming was driven by higher-than-normal solar radiation and lower-than-normal volcanic activity. It was also concentrated in the Northern Hemisphere, unlike contemporary global warming, which is worldwide). Now, she wants to dig deeper and in more marshes to better understand how frequently such droughts happen.

The pursuit isn’t purely academic: In 1961 the Northeast was hit by what would become that region’s longest and most severe drought on record. By 1963, the New York City water supply had dropped over seventy percent, leaving the city’s desperate water manager to beg restaurants not to serve water unless patrons asked for it, and for taxi drivers not to wash their cars more than twice a week.

“What is it going to be like if we have a 500 year drought?” Peteet says. Piecing together the pollen record, she says, can help establish patterns that policymakers and the public could draw on to better anticipate what the future will hold. As it stands, climate scientists think New York is in for hotter and wetter conditions, which, meteorologist Kevin Trenberth of the National Center for Atmospheric Research explains, can, somewhat counterintuitively, lead to more droughts. Precipitation is expected to increase, but it will happen in a series of severe downpours interspersed with dry spells; warmer temperatures in these dry spells can prolong them and increase the risk of drought.

“So all you have to do is miss some of these storms, and they’re very hit or miss, and you can end up with drought conditions even if the seasonal precipitation doesn’t look abnormal,” Trenberth says.

Since man-made climate change is happening on top of natural patterns, Peteet says, establishing a baseline through historic climate records like pollen can shed light on how a particular region will respond to predicted changes. For New York, she says, there’s no better place to look than in marshes…even when it means trudging through waist-deep mud. Her goal now is to find financing for a project to dig pollen samples from deeper reaches of more of the area’s marshes.

“I love coring a new spot,” she says, “because you never know what you’ll find.”