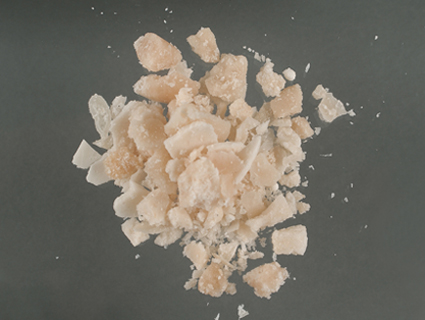 America’s prisons are bursting at the seams, and many states can no longer afford to keep offenders behind bars. Just last week, the Supreme Court ordered California to release almost 10,000 inmates in order to relieve conditions so crowded that the courts have deemed them unconstitutional.

Now Attorney General Eric Holder is calling for a big overhaul of sentencing rules in the United States, and lawmakers are introducing new bills along those lines. But even though conservatives claim that sentencing reform will give rapists and murderers free reign to terrorize American suburbs, certain kinds of prisoners have been quietly getting reduced sentences for some time now—with non-disastrous results. To see successful reform in action, civil liberties advocates point to a new report by the US Sentencing Commission showing how sentence reductions have been applied to crack cocaine offenders.

“These are people who are not violent, scary repeat offenders…We need to come up with shorter and smarter sentences”

Powder cocaine and crack are two versions of the same drug, except that crack is processed with baking soda or other substances. Until 2010, when Congress passed the Fair Sentencing Act, a person caught with one gram of crack would get as much time behind bars as someone caught with 100 grams of powder. This penalty disparity slammed African American communities where crack was especially rampant; plenty of black Americans ended up serving as much time for nonviolent crimes as white people convicted of violent acts like assault, rape, and even murder. The Fair Sentencing Act narrowed the gap—changing the crack-to-powder sentencing ratio to 1:18 by weight. In 2011, the Sentencing Commission agreed to apply the new law retroactively, which would mean early release for thousands of prisoners convicted on crack-related offenses.

Last week, the commission released preliminary numbers on how that effort is proceeding. “These are people who are not violent, scary repeat offenders, and we’re finally starting to recognize that we have limited resources, and we need to come up with shorter and smarter sentences,” says Molly Gill, government affairs counsel for Families Against Mandatory Minimums. “This report shows that the US prison system can take a big reform like this and apply it retroactively without the system crashing.” 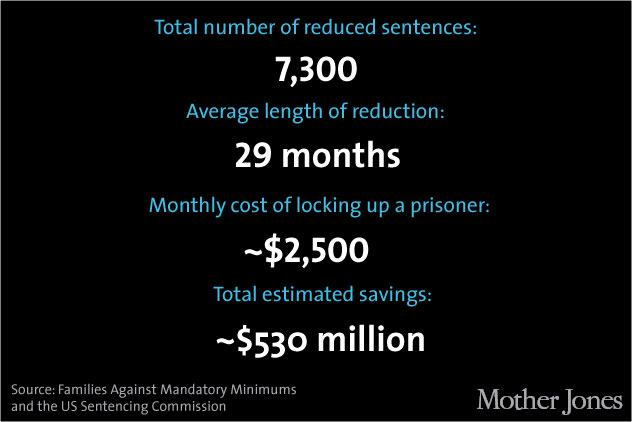 When the notion of retroactivity was first floated in 2011, Republicans went ballistic: Representative Lamar Smith (R-Texas), for one, said that the Obama administration was “more concerned with well-being of criminals than with the safety of our communities.” But Gill points out that the reductions already carried out will save taxpayers more than $500 million, and most of the requests are easily granted without burdening the courts.

Oregon and South Dakota saw the biggest average reductions, with crack sentences cut by almost 30 percent, while some states were less inclined to let prisoners off early; Connecticut and Delaware cut sentences by less than 15 percent. Prisoners in states with the longest sentences to begin with—Alabama, Indiana, and Iowa—saw less-dramatic reductions. Here’s the breakdown. (Click on map for details; unshaded states had no data available.)

You may wonder why there’s so much variation among states. As the report explains, the retroactivity thing is still just a guideline, not actual law. A bill introduced by Assistant Majority Leader Dick Durbin (D-Ill.) and Senator Mike Lee (R-Utah) last week would change that. Another bill introduced by Sens. Patrick J. Leahy (D-Vt.) and Rand Paul (R-Ky.) in March would further relax sentencing laws, giving judges the ability to hand out sentences lower than the current mandatory ones.

“It’s not like these people haven’t served debts to society; their original sentences were tremendously long.”

“Doing away with mandatory minimums, giving more discretion to judges, that shouldn’t be Republican or Democrat,” Leahy, who plans to hold a hearing on the issue next month, told NPR. “It just makes good sense.” Holder has also shown his support, noting to NPR, “I think there are too many people in jail for too long, and for not necessarily good reasons.”

Jesselyn McCurdy, a senior legislative counsel for the ACLU, which supports both bills, says the Sentencing Commission’s report proves that some states have figured out that “they simply cannot sustain such large prison populations.” She adds, “It’s not like these people haven’t served debts to society; their original sentences were tremendously long.”

The report includes statistics, presented in the chart below, showing that white (and also Hispanic) prisoners were granted sentence reductions at a greater rate than black prisoners. 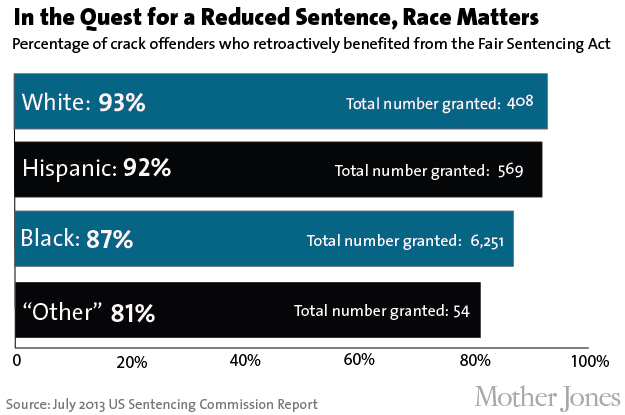 McCurdy says the racial discrepancy can be explained in part by the fact that far fewer white men than black men are jailed for crack cocaine, but also because “one of the things a judge takes into account in deciding whether to grant a sentence reduction is a person’s criminal history. And because of over-policing in African-American communities and racial disparities in the criminal justice system more broadly, African Americans end up with more serious criminal records.”