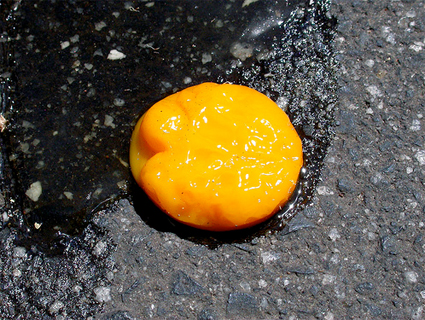 Dim Coumou and Alexander Robinson from the Potsdam Institute for Climate Impact Research have published a paper in Environmental Research Letters (open access, free to download) examining the frequency of extreme heat events in a warming world.

They compared a future in which humans continue to rely heavily on fossil fuels (an IPCC scenario called RCP8.5) to one in which we transition away from fossil fuels and rapidly reduce greenhouse gas emissions (called RCP2.6). In both cases, the global land area experiencing extreme summer heat will quadruple by 2040 due to the global warming that’s already locked in from the greenhouse gases we’ve emitted thus far.

However, in the low-emissions scenario, extreme heat frequency stabilizes after 2040 (left frames in Figure 1), while it becomes the new norm for most of the world in the high-emissions, fossil-fuel-heavy scenario (right frames in Figure 1). (Click here for a larger version.)

Figure 1: Multi-model mean of the percentage of boreal summer months in the time period 2071-2099 with temperatures beyond 3-sigma (top) and 5-sigma (bottom) under low emissions scenario RCP2.6 (left) and high emissions RCP8.5 (right).

Coumou and Robinson looked at the frequency of rare and extreme (3-sigma, meaning 3 standard deviations hotter than the average) and very rare and extreme (5-sigma) temperature events. Three-sigma represents a 1-in-370 event, and 5-sigma is a 1-in-1.7-million event.

As shown in the video below from NASA, summer temperatures have already begun to shift significantly toward more frequent hot extremes over the past 50 years. What used to be a rare 3-sigma event has already become more commonplace.

Coumou and Robinson point out that these 3-sigma events have tended to have very damaging consequences:

[M]ost of the 3-sigma extremes that have occurred in recent years resulted in serious impacts to society, causing many heat-related deaths, massive forest fires or harvest losses.

Coumou pointed to the Moscow summer heat wave of 2010 as a good example of a damaging 3-sigma extreme heat event. Thousands died during that heat wave, and the associated drought cut Russia’s wheat crop by 40 percent, cost the nation $15 billion, and led to a ban on grain exports, causing food prices to rise globally.

As Figure 1 above shows, if we continue to rely heavily on fossil fuels (right frames), these extreme heat events will occur throughout the summer for most of the global land area by the late 21st century, especially in the tropics. Currently, around 5 percent of the world’s land mass is experiencing a 3-sigma event at any one time during the summer months.

In the high greenhouse gas emissions scenario, most of Africa, Central America, and northern South America will experience 3-sigma extreme heat events for close to 100 percent of the summer. They will become the norm. Even extreme 5-sigma heat events, which are currently exceptionally rare, will become relatively commonplace, especially near the equator.

On the other hand, in the scenario where we take major steps to reduce human greenhouse gas emissions (left frames in Figure 1), 3-sigma events will still be relatively rare by the late 21st century, especially outside of the tropics. Extreme 5-sigma events will become somewhat more commonplace near the equator, but will remain fairly rare occurrences globally.

If we continue our reliance on fossil fuels and associated greenhouse gas emissions growth, we’ll commit ourselves to a world where today’s most extreme heat waves become the norm, and future extreme heat makes today’s heat waves look downright balmy.

It’s in our hands which future scenario becomes reality. It’s like one of those choose-your-own-adventure books, but real. Which future will we choose?