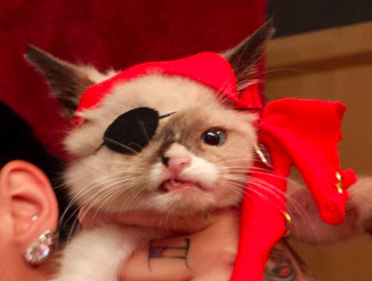 He is the cutest one-eyed, disfigured pirate cat you’ve ever seen.

Over the past few days, pictures of Sir Stuffington (pictured above) have been widely shared online, making him the latest in a rich tradition of feline internet obsession. But there’s so much more to Sir Stuffington than his adorable and funny Facebook photos. His story is one of perseverance and love, as well as internet fame.

Earlier this month, the cat and his two brothers were taken into Multnomah County Animal Services, an open-door animal shelter in Troutdale, Oregon. Sir Stuffington wasn’t in good shape—his damaged jaw, his missing eye, his upper respiratory infection, his heart murmur, his body covered in fleas and dirt. (All three were about six weeks old, and came in with calicivirus.) But even before the kittens had been taken to the shelter, local resident Blazer Schaffer had stumbled upon a Facebook photo of Sir Stuffington suffering in the street, and was determined to track him down. Schaffer, an animal lover who has worked with the shelter for a decade, soon found the three kitten there. She promptly took them home as their foster parent, and is taking care of them at least for a couple months until they’re healthy enough for adoption.

“I’m kind of popular in Portland, since I’ve been a performer there for a long time,” Schaffer says. “I posted some pics to my Facebook page, and they were wildly popular among my friends. One of them then suggested making a fan page.” So on September 16, Schaffer created Sir Stuffington’s photo-filled Facebook page—and in five days, it racked up over 14,000 likes and quickly made the rounds online. “I was not expecting this kind of attention at all,” Schaffer tells me. “BuzzFeed picked it up. Animal Planet picked it up. There was a slew of sharing.”

Schaffer claims that she had no idea Sir Stuffington—one-eyed, ostensibly snarling—even resembled a pirate. “One day, my girlfriend sent me a bunch of emails with photos, and I saw turned him into a pirate!” she says. “And since Thursday happened to be International Talk Like a Pirate Day, the photos on Facebook just went crazy. People said, ‘Oh, my god, he’s a pirate!‘ and it blew up from there.”

“Every person can make a difference; all you have to do is stop and pick up a stray and take him or her to a shelter or a vet.”

Over these last few days, the three brothers have been adjusting to their new home, and, according to Schaffer, a good deal of success. “They are a tiny bit shy, but incredibly curious,” she says. “Friday was the first day they saw one of the dogs in the house; they were curious but not particularly impressed.”

The brothers are called Nugget and Dexter, and were named by Schaffer’s daughter. The now internet-famous cat, however, was named by the foster mother herself. “When I first saw his picture I thought he looked like a cute little teddy bear that lost his stuffing,” Schaffer says, explaining the name’s origin. “And ‘Sir’ because he is dignified.”

I asked Schaffer how she felt about the elite club of celebrity cats that Sir Stuffington has just joined. “I’m only somewhat familiar with Grumpy Cat and other internet-famous cats,” she tells me. “I’m not as into Grumpy Cat. She seems like a lovely cat; I have nothing against her, but I’m a bigger fan of survivors. I love survivor stories…Even people who look different or feel different are just as amazing as everyone else, if not more so, because they have more of a fight in them.”

“We’d like to thank Blazer for her heroic efforts,” the Multnomah County Animal Services website reads. “Sir Stuffington’s Facebook Page will not only help him and his siblings find homes, it’s also a wonderful example of how people can make a difference and get involved with Portland’s own local shelter—either by volunteering, fostering or donating.” (Photo prints of the cat—courtesy of AmyWho Photography—are sold here, with all proceeds going to the shelter.)

“It’s heartwarming—it’s nice to see so many kind people care,” Schaffer says. “Every person can make a difference; all you have to do is stop and pick up a stray and take him or her to a shelter or a vet. I mean, look at the big picture of everything in the world that’s negative. Some might think this is a little silly. Some would say it’s just a cat. But I think it’s nice to have a little bit of positive—something that can make you smile. There’s a lot of sad in the world right now.” 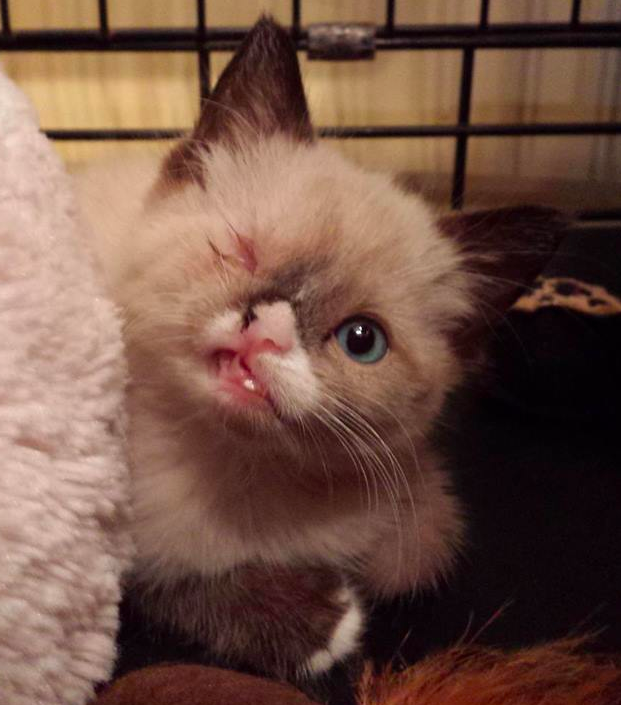 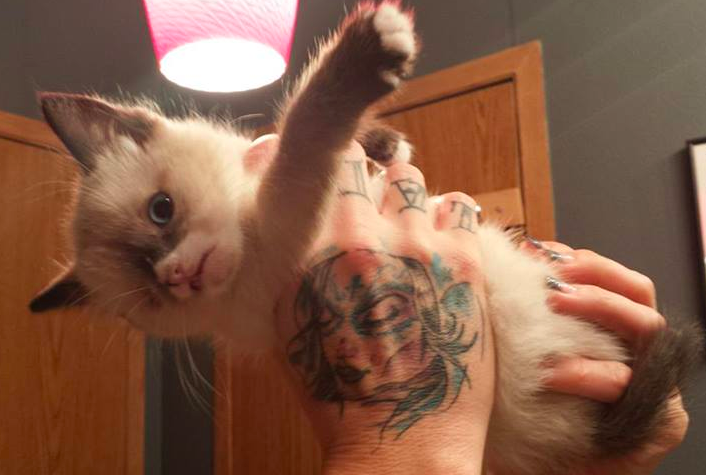 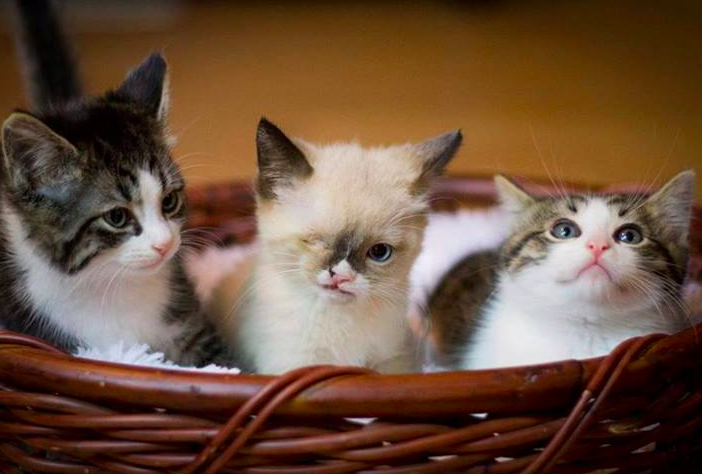 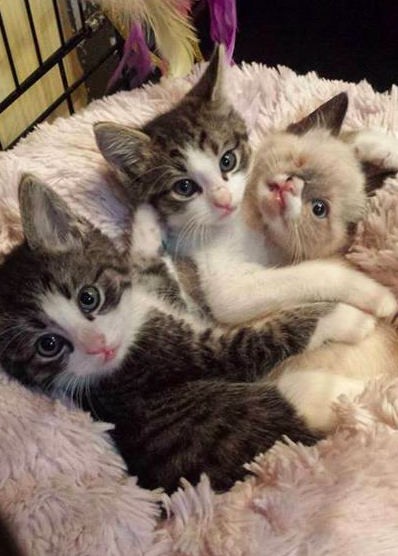 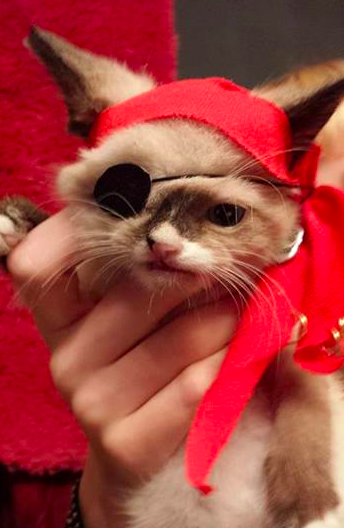 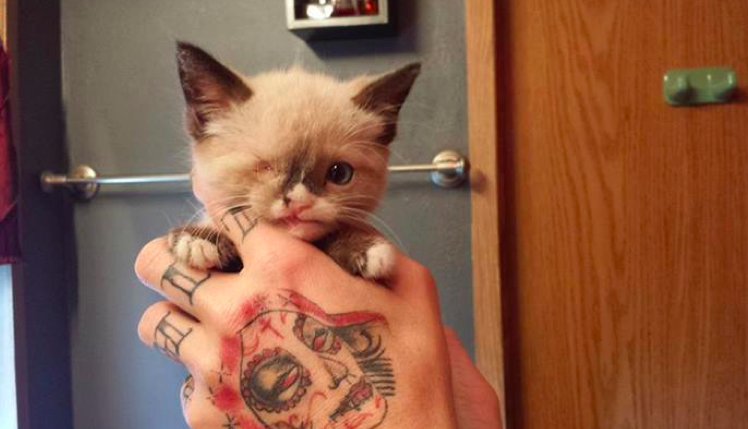 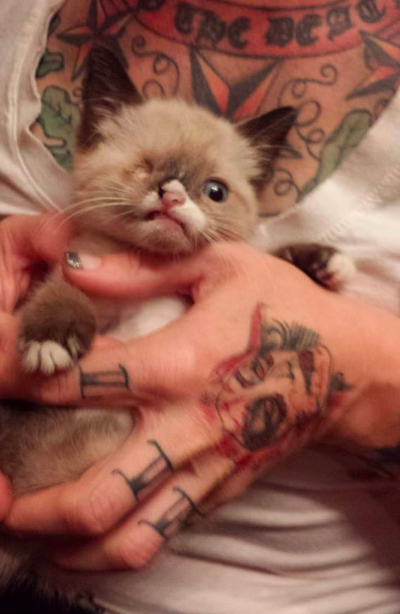 Here’s some footage of the new celebrity: