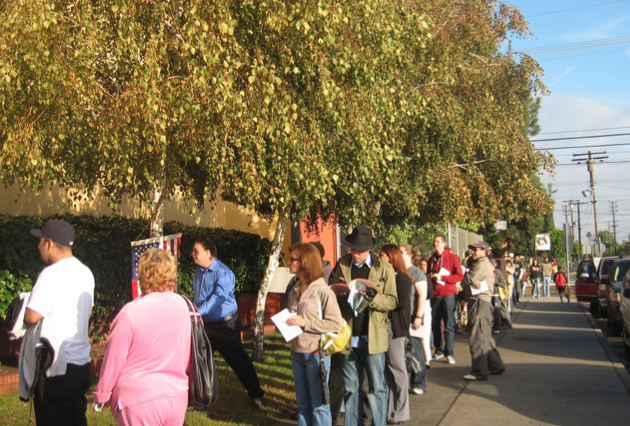 When I voted last year in downtown Washington, DC, I was able to walk down the street, cast my ballot, and get back to the office in less than 30 minutes. But according to a new report by two voting rights groups, the Advancement Project and OurTime.org, plenty of American voters weren’t so lucky. According to their research, African Americans, Latinos, and millennials in Virginia and Florida—two key battleground states—faced significantly longer wait times than older white voters in 2012. This was largely because the former groups are more inclined to utilize early voting, which was restricted in both states last year. And according to the report, this new “time tax”—along with other voting obstacles, like strict ID laws—will likely continue to dampen voter turnout among these groups in 2016.

In 2012, Florida cut early voting from 14 days to 8 days, and lines were so long, more than 200,000 Florida voters gave up and went home, according to data collected by the Orlando Sentinel. The Advancement Project and OurTime.org report focused on 5,196 of the 6,100 voting precincts that were used last November in Florida—which faced some of the longest voting lines in the country—and found that young voters spent a disproportionately longer time waiting to vote. For example, in Orange County, which has the highest percentage of voters younger than 30 in the state (22 percent), precincts closed an average of 86 minutes after the 7 p.m. deadline, with one precinct closing five hours late. The report found that in Orange County, the trend indicated that the more voters under 30 there were at a certain precinct, the later the closing time.

“Regarding the number of people willing to wait in line to vote in 2012, there were others who didn’t vote, and there is no guarantee that voters will always be able to wait so long to exercise their fundamental rights,” says Katherine Culliton-González, director of Advancement Project’s Voter Protection Program. The report makes the case that young voters have less flexibility with their work schedules, and when early voting days are cut, as they were in Florida, lines get longer. Millennials (defined in the report as people between the ages of 18 and 29) are also more racially diverse than the rest of the population, meaning that there is often an overlap between young voters and voters of color. This 2013 MIT report found that voters of color are also more likely to wait in line than white voters:

The conservative Heritage Foundation maintains that African Americans face longer voting times than white voters because they “tend to be concentrated in large urban areas” and “the most populous areas had longer wait times than those living in areas with fewer voters.” But Culliton-González, from the Advancement Project, tells Mother Jones that her group’s study disproves this, since their research found that there wasn’t a clear correlation between longer lines and precincts with dense populations. She says that, in Virginia, for example, “unless a voter can prove they are sick, otherwise disabled, or have to travel for work on Election Day, all voters must vote on the first Tuesday in November. These limits are probably what caused the disparities, as due to socioeconomic factors, many young voters of color have less flexibility in their work schedules.” Voting rights groups argue that all states should offer flexible early voting—but some states have done the opposite: North Carolina, for example, is restricting early voting from 17 days to 10 days, starting in 2014.

Culliton-González adds, “We are concerned about 2014, but even more concerned about 2016,” since Florida and other states will likely not have enough early voting time so that voters can avoid long lines. (The Advancement Project didn’t find evidence of the “time tax” in the state elections earlier this month, partly because voter turnout was so low.)

But even if early voting is taken care of, young voters of color are also more likely to be turned away from the polls because of identification requirements. This was true in 2012, even in states that didn’t have voter ID requirements on the books (see chart below). In the state elections that occurred earlier this month, numerous voters complained of being unable to vote because of real or perceived voter ID laws.

According to data collected by the Black Youth Project, an activist group that does research on issues that affect African American youth, only 67 percent of Latino youth and 71 percent of black youth possess driver’s licenses, compared to 85 percent of white youth. Additionally, three times more young black voters than white voters said that lack of an ID was the reason they didn’t vote in 2012. The Advancement Project and OurTime.org have submitted their report to the Presidential Committee on Election Administration, President Obama’s group that is tasked with finding ways to improve voting.