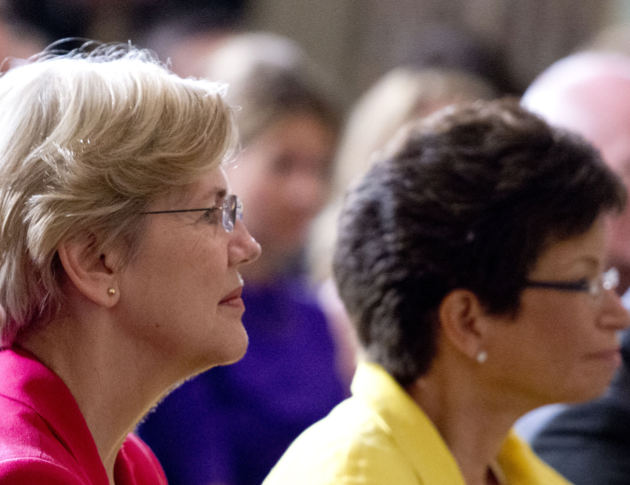 On Tuesday, Sen. Elizabeth Warren (D-Mass.) and six of her colleagues in the Senate introduced a bill that would prevent employers from using credit checks in the hiring process, a practice that disproportionately hurts poor people.

Over the past few decades, credit reporting bureaus have begun selling their services not just to lenders, but to a wide range of employers. Forty-seven percent of employers check applicants’ credit history as an indicator of their employability, according to a 2012 survey by the Society for Human Resource Management. But research shows that a person’s credit score has nothing to do with her likelihood of succeeding in the workplace. The Equal Employment for All Act—co-sponsored by Sens. Richard Blumenthal (D-Conn.), Sherrod Brown (D-Ohio), Patrick Leahy (D-Vt.), Edward J. Markey (D-Mass.), Jeanne Shaheen (D-N.H.), and Sheldon Whitehouse (D-R.I.)—would prohibit the judging of applicants by this metric.

“A bad credit rating is far more often the result of unexpected medical costs, unemployment, economic downturns, or other bad breaks than it is a reflection on an individual’s character or abilities,” Warren said. “Families have not fully recovered from the 2008 financial crisis, and too many Americans are still searching for jobs. This is about basic fairness—let people compete on the merits, not on whether they already have enough money to pay all their bills.”

The bill, which is backed by over 40 community, financial reform, labor and civil rights organizations, would be a boon for low-wage workers, minority communities, and women. Credit checks used in the hiring process disproportionately disqualify people of color. Divorce tends to hit women’s finances harder than men’s, and women are also more likely to receive subprime loans than men.

Chi Chi Wu, a staff lawyer at the National Consumer Law Center in Boston, told the New York Times in May that most of the people who contacted her group complaining that they’d been denied a job because of poor credit were low-wage workers applying to big retail chains. “Someone loses their job,” she said, “so they can’t pay their bills—and now they can’t get a job because they couldn’t pay their bills because they lost a job? It’s this Catch-22 that makes no sense.”

There is ample support for the senators’ bill. In 2011, Rep. Steve Cohen (D-Tenn.) introduced a similar bill in the House. Nine states have adopted legislation that curbs the use of credit reports to in the hiring process.