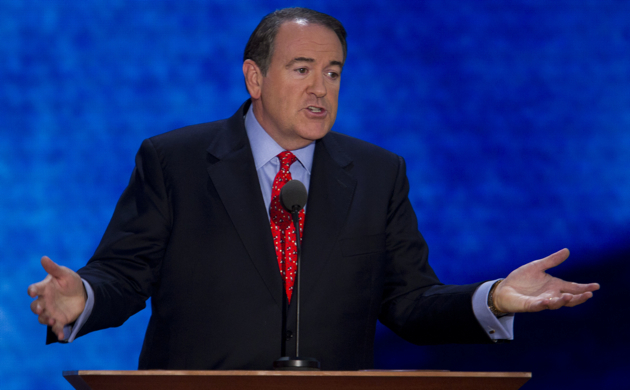 Mike Huckabee, the former governor of Arkansas turned presidential aspirant, has been largely inconsequential in Republican politics since he shuttered his 2008 campaign. Unlike the Sarah Palins and Jim DeMints of the Tea Party wing, Huckabee has played a small role in elevating party usurpers like senators Ted Cruz (R-Tex.) and Rand Paul (R-Ky.). The Christian Crusader has been mostly absent from politics, instead favoring punditry through cable news—a far more lucrative venture. As of 2011, Huckabee was earning half a million dollars a year from his show on Fox News, on top of extra income from his recently shuttered radio show and other paid appearances.

But being the runner-up of a now-distant presidential primary doesn’t carry much political cache. So Huckabee has begun a concerted media effort to drum up interest in will-he-or-won’t-he speculation about another presidential bid in 2016. First came a New York Times interview two weeks ago. “I’m keeping the door open,” he told the paper. “I think right now the focus needs to be on 2014, but I’m mindful of the fact that there’s a real opportunity for me.” Huckabee followed that up with an appearance on Fox News Sunday this past weekend, where he again played coy while highlighting his potential interest in a campaign. “I would say maybe at this point it is 50-50, but I don’t know,” Huckabee said.

First things first: A successful repeat of Huckabee’s 2008 bid seems unlikely. The last time Huckabee successfully ran for public office was his gubernatorial reelection bid in 2002—not exactly material for a robust presidential campaign come 2016. Even if Huckabee chose to run once again, it’s hard to imagine him carving out a space in the Republican 2016 primary. In 2008, he became the banner carrier for the religious right. Rick Santorum claimed that mantle in 2012 and appears poised to resume the crusade next time around. If Republican primary voters don’t want a fresh face like Cruz, Paul, or Sen. Marco Rubio (R-Fla.), it’s likely they’ll settle on Santorum, rather than Huckabee, as the next-in-line candidate.

So why the sudden interest? Well, as that Times article from earlier this month noted, Huckabee feels like he hasn’t received his due for finishing second in the 2008 primary behind Sen. John McCain (R-Ariz.). Part of that must be vanity, but calling attention to his standing in 2008 is also practical. Huckabee’s political relevance is what got him his show on Fox. Prior to entering politics, Huckabee worked as a pastor, a solid life but hardly the one-percent dream he’s living now. Thanks to that Fox News income, Huckabee lives in a $3 million Florida beach home. Huckabee acknowledged that it’d be tough to relinquish that lavish lifestyle when pushed in the Times interview. “And it’s why I’m not in a big hurry to do anything,” he said. There’s no better way to lock down that steady income than to rev up the media hype machine for another round of speculation about future presidential campaigns.