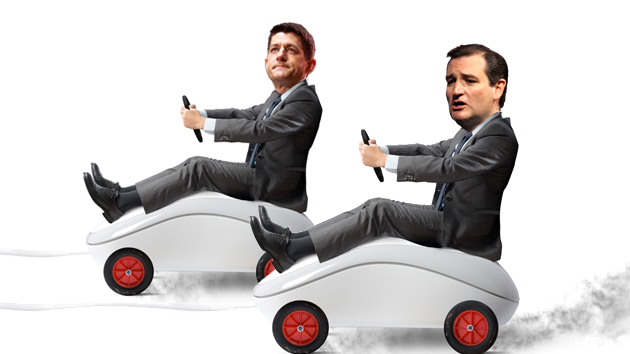 There’s a long checklist of tasks a politician must complete before she or he can run for president. You’ve got to court the top political consultants to your cause. Wine and dine at party fundraisers in New Hampshire. Familiarize yourself with all 99 damned counties in Iowa. Maybe write a book. But in the modern age, securing an online presence is near the top of the list.

The first thing candidates have to do to stake their claim on the internet is purchase all relevant web domain names, including any combination of the candidate’s name and the election year. Would-be-supporters look online to find out more information about candidates, but if the candidate’s website doesn’t have an easy-to-guess address and it’s not high up in Google rankings, voters might get a skewed story. That’s a lesson former presidential candidate Rick Santorum learned the hard way after sex advice columnist Dan Savage gamed Google so that a nasty neologism for Santorum’s name was one of the first results to pop up when people did a search for the Christian conservative. Detractors like Savage, opportunists trying to make a buck, and political opponents can be quick to snatch up valuable domains to exploit.

The National Republican Congressional Committee has set up a string of dummy websites that look like they’re for individual Democratic candidates but actually collect donations for the GOP’s cause. And Time‘s Zeke Miller recently mapped out the burgeoning universe of Hillary Clinton website squatters. A few prominent domains were being sold (for upwards of $14,000), while HillaryClinton2016.com, founded by a group of grad students, is an LLC hawking knockoff Clinton merchandise.

But what about the potential Republican 2016ers? By this point most of them aren’t hiding their inclinations to run for president. Some are already ahead of the game. Kentucky Sen. Rand Paul is up for reelection in 2016, so he has a convenient excuse for owning RandPaul2016.com. Go to Jindal2016.com and you’re redirected to the Louisiana governor’s main website. Sen. Marco Rubio’s PAC has claimed MarcoRubio.com, while MarcoRubio2016.com is registered anonymously, perhaps by the Florida senator or one of his campaign aides.

But other potential GOP presidential nominees need to up their website game. Take Sen. Ted Cruz. Unfortunately for the Texas Republican, long before he ran for Senate in 2012, TedCruz.com had been nabbed by an Arizona attorney who shares his name. Based on a search of the Wayback Machine, an internet archive, the Arizona Cruz’s website dates back to at least early 2008, when it was a normal, if slightly Geocities-tinged, business website. “Putting All Your Real Estate Needs In ‘CRUZ CONTROL,'” the attorney’s tagline said at the time. But sometime within the past year he ditched his law site to instead mock the would-be-president. On a simple black background, in large font, the website screamed: “COMING SOON, Presidential Candidate, I Luv CHRISTIE!!!!!” Attorney Cruz wouldn’t say anything to Mother Jones over email except to acknowledge that he has owned the domain for several years. But he deleted the section about loving Christie shortly thereafter. Given the initial message, though, it seems unlikely that the Arizona attorney will be easily persuaded to relinquish control of the domain to the senator. 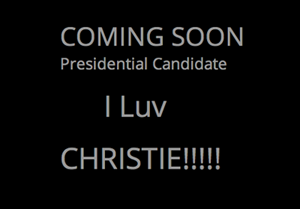 What about TedCruz2016.com? Go to the site and all you see is a simple placeholder of gauzy images. The domain is registered and operated by 92 West, a web design firm based in Omaha. Troy Kadavy, 92 West’s owner, wouldn’t reveal much about the website, but said that the domain had been purchased about six months ago for a client he couldn’t disclose. But it seems unlikely that Cruz’s associates contracted with 92 West: The firm is just a small company of four with few website credits to its name, at least according to its portfolio. A search of FEC records from around the time the domain was registered doesn’t reveal any PACs or candidate committees paying money to 92 West, and TedCruz.org and www.tedcruzforsenate.org, both websites owned by his committee, were registered anonymously.

New Jersey Gov. Chris Christie is in a similar tricky spot. ChrisChristie.com is owned by a Milwaukee-based computer programmer. The website lists the programming languages he’s skilled at and features pictures of his kids. Princeton senior Davis Waddell has owned www.chrischristie2016.com, which currently sits dormant, since 2010. (He didn’t respond to an email from Mother Jones.)

A clever musical instrument store has latched onto the Paul Ryan bandwagon. Currently, PaulRyan.com will redirect you to EverestMusic.com, a store in the town of Wicklow, Ireland, where you can purchase all the amps you need and pay €199 for a 10-week lesson in piano, guitar, drums, banjo, or a host of other instruments. Ryan isn’t totally out of luck though: PaulRyan2016.com is currently for sale for the low, low price of $1,795.

Former Florida Gov. Jeb Bush is also in rough shape should he decide to run in 2016. His logical campaign web address would be JebBush.com, but that website is currently blank. It’s registered anonymously, so perhaps someone in Jeb’s orbit owns the domain. But the last time it showed up on the Wayback Machine was in March 2008, when the domain automatically redirected to jeb-bush.blogspot.com. That website clearly has no relationship to the former Florida governor. An author going by the name Ryan Braun (possibly a fan of the Milwaukee Brewers outfielder?) writes bizarre parody stories. It hasn’t been updated since February 2012, but back then blogger Braun was writing posts such as “President Obama Plans on Plying Republicans with Liquor to Get Budget Passed” and “Mitt Romney Camp Hires Renowned Chuckle Coach.”

JebBush2016.com is currently sitting unused and has been registered to a New Yorker named Benny Thottam, who had an impressive amount of foresight. “In 2007 I thought of Jeb Bush being a solid candidate for 2016 election,” he told Mother Jones by email. “I do hope that he will run and I am very open about voting for him.”

Rand Paul might own RandPaul2016.com, but RandPaul.com is out of his hands. Right now it’s billed as an “unofficial fan site” that’s coming soon. The website doesn’t list any contact information for the webmaster, but it seems to be owned by sincere Paul believers. The site describes Paul as “a humble philosopher and a straightforward champion for our rights. He has a clear vision for America. He is the statesman we need in these difficult times.”

What about the Democrats? Vice President Joe Biden, Maryland Gov. Martin O’Malley, and New York Gov. Andrew Cuomo all control their own .coms, but Sen. Bernie Sanders of Vermont—the only Democrat who has made serious public hay about actually challenging Clinton—is in trouble. BernieSanders.com is currently a shell website that features stock business photos and sponsored links.

The key takeaway for any politician hoping to someday run for higher office is to plan far in advance. With that in mind, how do far-off potential presidents fare? If George P. Bush, Jeb’s son and a 2014 candidate for state office in Texas, someday wants to follow in the footsteps of his grandfather and uncle, he’ll have to wait a bit longer. GeorgeBush2020.com has already been anonymously registered and is currently unused—though it can’t be ruled out that someone in the Bush orbit registered that domain. No matter what, if the 38-year-old is willing to wait 10 years, GeorgeBush2024.com is unregistered and available to purchase.

George P. isn’t the only one who should start planning ahead. Malia Obama won’t be eligible to run for president until the 2036 election, so her dad’s political advisers better jump on MaliaObama2036.com while it’s still available.