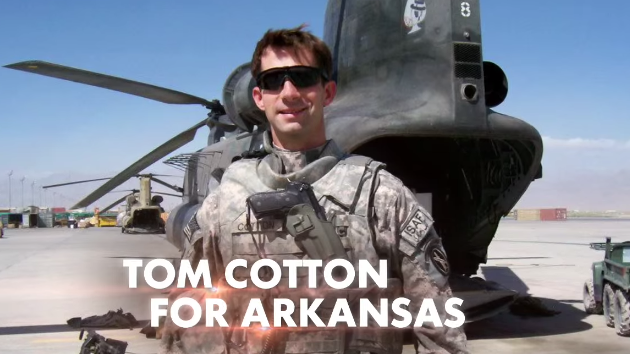 Arkansas is witnessing what may be the most expensive political ad campaign in state history: $1.5 million worth of glowing TV spots supporting Tom Cotton, a Republican congressman who’s running against Democrat Sen. Mark Pryor.

The race could decide which party controls the Senate. But no one knows who’s paying for this giant ad buy—and that’s partly because the group behind those ads may have flaunted IRS law in order to conceal the identities of its donors.

If this seems complicated, it’s supposed to be. Political operatives on both sides raise and spend money through 501(c)(4)s and other tax-exempt groups with vague-sounding names to avoid disclosure. Watchdog groups maintain that this is a violation of IRS law. And the Government Integrity Fund already has a spotty record.

In 2012, this group spent millions on ads for Josh Mandel, a Republican, who ultimately lost to Ohio Sen. Sherrod Brown, the Democratic incumbent. It spent about $1 million directly on those spots and donated another $2 million or so to the Government Integrity Fund Action Network super-PAC for additional pro-Mandel ads.

Federal law bans 501(c)(4)s from spending the majority of their money on election activity. A ProPublica investigation found that the Government Integrity Fund exceeded this standard in 2012, and that the group hid this by not reporting its $1 million in direct pro-Mandel spending as political activity.

When the Government Integrity Fund first filed with the IRS, its chairman filled out a form with the following question: “Has the organization spent or does it plan to spend any money attempting to influence the selection, nomination, election, or appointment of any person to any Federal, state, or local public office or to an office in a political organization?” He answered “no.” A “yes” answer might have caused the IRS to think twice before giving the group 501(c)(4) status. Knowingly providing a false answer on the form can result in perjury charges.

It’s impossible to know if the Government Integrity Fund, with its Cotton ads, is once again exceeding limits on its political spending. The group will not be required to disclose this year’s expenses to the IRS until the end of 2015.

The timing of its dark-money bomb, however, was perfect: The ads hit Arkansas right as the GOP is growing worried about Pryor’s resilience in the polls. Todd says the goal of the campaign was to introduce Cotton to voters in a highly positive light.

“We just wanted people to know more about him,” he says. “‘Hey, here’s Tom Cotton, here’s what you should know about him.’ Give voters positive information and to heck with the rest.” Todd wouldn’t say whether there was more money in the pipeline for Cotton’s race or others. “All I can say is the organization is planning to continue.”