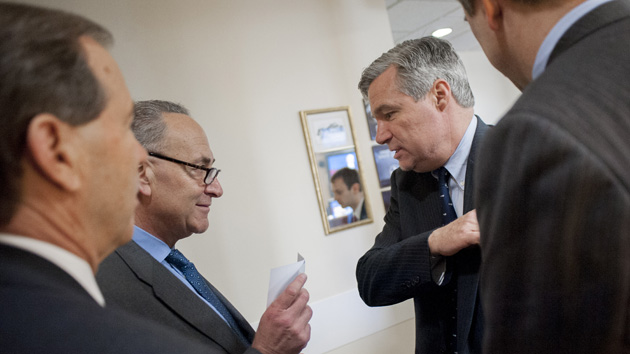 The 2014 elections are awash in dark money—and it’s only getting worse. The Koch-backed Americans for Prosperity alone plans to spend $125 million or more on this year’s elections. In response, Senate Democrats are ratcheting up their efforts to put anonymous political spending in the headlines. On Tuesday, a group of Democrats introduced a rebooted version of the DISCLOSE Act, a bill intended to cast light on political dark money, which spiked from $69 million in 2008 to $310 million in 2012.

Cosponsored by 50 Democrats in the Senate, the DISCLOSE Act of 2014 would cover election spending by corporations, labor unions, super-PACs, and, most importantly, politically active nonprofits (like Americans for Prosperity or the Democrat-aligned Patriot Majority). Disclosing dark money is a tricky issue—here’s how new bill would attempt to do it.

Say you run an anonymously funded nonprofit group planning to spend money on the 2014 midterms. Under this bill, after spending your first $10,000 on elections, you’d have to disclose that spending within 24 hours to the Federal Election Commission. You’d then need to disclose each additional $10,000 in election spending—again within 24 hours. Right now, spending by nonprofit groups can occur with little or no disclosure, so this would give reporters, parties, campaigns, and the public much more up-to-date information on who’s spending money where.

What about the donors funding these groups? The new DISCLOSE Act would require groups covered by the bill to reveal the source of donations of $10,000 or more. That’s no sweat for super-PACs, which already disclose their donors. But it’s a huge deal for politically active nonprofits, those groups organized under the 501(c)(4) section of the tax code. Part of the appeal of these nonprofits is the anonymity they afford their funders: A donor can give $1 million or $10 million or $100 million without anyone being the wiser. (The bill does allow for groups to use separate bank accounts—one to fund election spending, another to fund issue advocacy—to give anonymity to donors who wish to support non-political work.)

The bill also targets the use of pass-throughs and shell corporations to evade disclosure rules, mandating that groups that receive such donations name the origin of the money. We’ve seen a few notable instances of this. In 2011, a mysterious company called W Spann LLC gave $1 million to the pro-Romney super-PAC Restore Our Future—then it dissolved. The true donor’s identity remained hidden until pressure from Democrats and the media prompted Ed Conard, a former partner of Romney’s at Bain Capital, to reveal that he authorized the W Spann donation. In late 2012, the Washington Post reported that Cancer Treatment Centers of America founder Richard Stephenson and his family routed $12 million in donations to the tea-party group FreedomWorks through two Tennessee companies. Until the Post‘s story, the true source of the $12 million was unknown.

Back to the new DISCLOSE Act. In a nutshell it calls for: More information on campaign spending, disclosed more quickly. More disclosure of previously hidden big donors—liberal and conservative and centrist—influencing elections. And no shell games to avoid the sunlight.

The bad news: The new DISCLOSE Act is likely going nowhere. Senate Republicans, rallied by Minority Leader Mitch McConnell (R-Ky.), have blocked earlier iterations of the DISCLOSE Act since 2010. McConnell, currently a foe of campaign finance limits, will no doubt fight the new legislation. It is almost guaranteed the bill will not secure the 60 votes needed to overcome a filibuster.

In unveiling the new DISCLOSE Act, Senate Democrats highlighted McConnell’s past support for greater disclosure of election spending. In 1987, McConnell introduced a resolution to allow Congress to set limits on outside spending intended to elect or defeat a candidate for federal office; he said the measure “would restrict the power of special interest PACs, stop the flow of all soft money, keep wealthy individuals from buying public office.” In 1997, McConnell called for “expedited” public disclosure of campaign giving and spending. And in 2000, on the Senate floor, he said, “Virtually everybody in the Senate is in favor of enhanced disclosure, greater disclosure, that’s really hardly a controversial subject.”