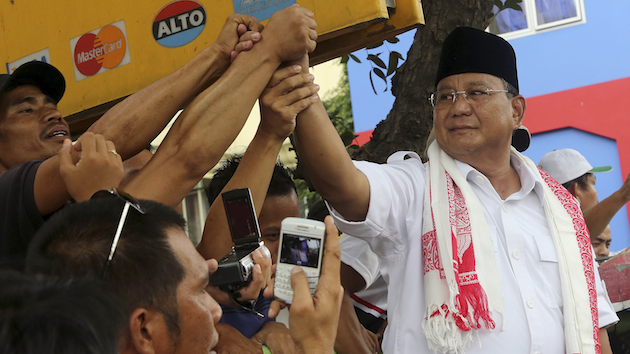 On July 9, the people of Indonesia will directly elect their president for only the second time ever. Quickly ascending in the polls is Prabowo Subianto, a former lieutenant general in the Indonesian armed forces, who as of July 1 has virtually tied as front-runner. Prabowo’s rise to prominence is alarming many journalists, scholars, and human rights organizations, who accuse him of human rights abuses, including claims that his military unit took part in mass executions, forced displacement, kidnapping, rape, and torture.

Prabowo’s been dogged by such claims of abuses throughout his career, but has so far never been prosecuted. The list of allegations includes possible involvement in a 1980s Indonesian counterinsurgency operation in East Timor that ultimately killed or disappeared over 500 East Timorese people. Specifically, scholars and human rights activists suspect that Prabowo’s military unit took part in a 1983 incident near Viqueque, East Timor, where Indonesian government forces massacred 55 villagers.

“I heard two small children, one girl and one boy, about one to two years old,” a survivor testified to the East Timorese truth commission, CAVR, in 2004. “When they shot, they had missed the children. Then M303 [a ‘Hansip’ (civilian guard) commander)]…went over to the two babies and took a knife and stabbed them to death. Then the Indonesian [soldiers] and Hansip took another break and had a cigarette.”

When the Jakarta Post reported Prabowo’s potential ties to the massacre in December, the candidate wrote in to the paper to call the allegations “unfounded.” (The Prabowo campaign has not responded to Mother Jones‘ request for comment.)

Prabowo “reached over the heads of local military commanders and organized civilian vigilantes to commit acts of rape, torture, and murder against villages sympathetic to the pro-independence opposition,” notes Indonesia scholar Robert Hefner, an anthropology professor at Boston University, of the lieutenant general’s time in East Timor in the ’80s.

Prabowo “reached over the heads of local military commanders and organized civilian vigilantes to commit acts of rape, torture, and murder against villages.”

In 2006, an inquiry by the national government accused Prabowo’s military unit of orchestrating the kidnapping and torture of 23 pro-democracy organizers in 1997 and 1998, toward the end of the Suharto dictatorship in the country—after this incident, Prabowo was discharged from the military. A separate government-appointed fact-finding commission implicated him in the riots surrounding Suharto’s resignation in May 1998, where 1,000 people were killed and at least 168 women were raped across the country.

Ultimately, the 2006 government inquiry urged that Prabowo be prosecuted. But Indonesia’s attorney general’s office, which has generally neglected to investigate Suharto-era abuses, has to date ignored the recommendation to prosecute.

What’s more, Prabowo may have honed some of his tactics on US soil. In 1998, the Washington Post reported that Prabowo’s “ties to the US military are the closest of any among the US-trained officer corps” in Indonesia, citing his completion of army training courses at North Carolina’s Fort Bragg in 1980 and Georgia’s Fort Benning in 1985.

Prabowo’s father, economist Sumitro Djojohadikusumo, was briefly exiled from the country for collaborating in a CIA-backed coup attempt against Indonesia’s founding president, Sukarno, in 1957. Upon his return to Indonesia in 1968, the economist was appointed trade minister under the new dictator, Suharto. In this position, he oversaw the so-called “Berkeley Mafia” of US-trained economists who, in the mid-1960s, conducted mass privatizations of Indonesia’s mineral wealth, granting foreign corporations the right to seize control of 100 percent of the country’s abundant copper, nickel, hardwood, rubber, and oil. The move would intensify environmental degradation and wealth inequalities in what was then the poorest nation in Southeast Asia.

The Prabowo campaign seems eager to obscure all this history as it gears up for the July 9 election. Just last week, Prabowo’s camp threatened to arrest American journalist Allan Nairn after he published his 2001 interview with Prabowo, during which the former general claimed that “Indonesia is not ready for democracy” and needs “a benign authoritarian regime” instead. Prabowo wondered aloud whether he was capable of taking the country in that direction: “Do I have the guts?” he asked. “Am I ready to be called a fascist dictator?” More recently, Prabowo gave a public speech recommending that Indonesia shift away from Western-style democracy, which he called not “suitable” for the country.

During a 2001 interview Prabowo claimed that “Indonesia is not ready for democracy” and needs “a benign authoritarian regime.”

Prabowo has done little to help his image. Recently, he praised a Nazi-style music video—made by several singers to support the campaign—for “boosting our fighting spirit!” In the video, set to Queen’s “We Will Rock You,” musician Ahmad Dhani dons a jacket reminiscent of SS commander Heinrich Himmler and waves a golden garuda, Indonesia’s national emblem—a mythical bird that in this context looks a lot like the German imperial eagle used by the Nazis. (YouTube has since removed the video.)

“What’s the connection between German soldiers and Indonesia?” Dhani asked last Wednesday, responding to criticism of the video. “We, the Indonesian people, didn’t kill millions of Jewish people, right?”

After decades of military dictatorship, Indonesia’s political culture still has lots of recovering to do. As Allan Nairn told Democracy Now!, “On the one hand, you have Jokowi [the other presidential candidate], who is backed by killers…on the other hand, you have Prabowo, who is a killer himself”—not particularly enticing choices. But what’s clear is that Indonesians deserve justice for the violence committed in the name of a dictator, not a president who may become one himself.