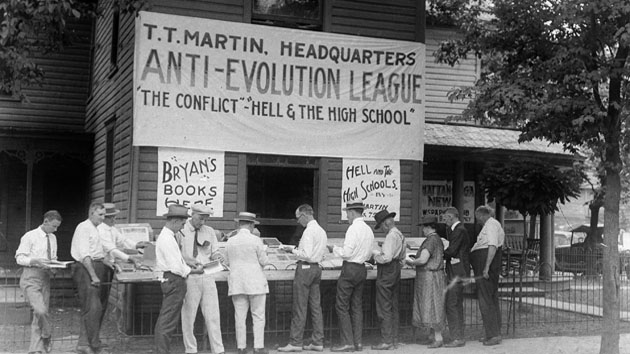 Evangelist T.T. Martin's books against the theory of evolution are sold in Dayton, Tennessee, scene of the 1925 Scopes trial.AP

Are science and religion doomed to eternal “warfare,” or can they just get along? Philosophers, theologians, scientists, and atheists debate this subject endlessly (and often, angrily). We hear a lot less from economists on the matter, however. But in a recent paper, Princeton economist Roland Bénabou and two colleagues unveiled a surprising finding that would at least appear to bolster the “conflict” camp: Both across countries and also across US states, higher levels of religiosity are related to lower levels of scientific innovation.

“Places with higher levels of religiosity have lower rates of scientific and technical innovation, as measured by patents per capita,” comments Bénabou. He adds that the pattern persists “when controlling for differences in income per capita, population, and rates of higher education.”

That’s the most salient finding from the paper by Bénabou and his colleagues, which uses an economic model to explore how scientific innovation, religiosity, and the power of the state interact to form different “regimes.” The three kinds of regimes that they identify: a secular, European-style regime in which religion has very little policy influence and science garners great support; a repressive, theocratic regime in which the state and religion merge to suppress science; and a more intermediate, American-style regime in which religion and science both thrive, with the state supporting science and religions (mostly) trying to accommodate themselves to its findings.

It is in the process of this inquiry on the relationship between science, religion, and the state that the researchers dive into an analysis of patents, both in the United States and across the globe. And the results are pretty striking.

First, the researchers looked at the raw data on patents per capita (taken from the World Intellectual Property Organization’s data) and religiosity (based on the following question from the World Values Survey: “Independently of whether you go to church or not, would you say you are: a religious person, not a religious person, a convinced atheist, don’t know”). And they found a “strong negative relationship” between the two. In other words, for countries around the world, more religion was tied to fewer patents per individual residing in the country.

Those data aren’t shown here, however, because in many ways, that would be too simplistic of an analysis. It is clear that many other factors than just religion (wealth, education, and so on) influence a country’s number of patents per capita. What’s striking, however, is that after the authors controlled for no less than five other standard variables related to innovation (population, levels of economic development, levels of foreign investment, educational levels, and intellectual property protections) the relationship still persisted. Here’s a scatterplot showing what the data look like after applying these controls: 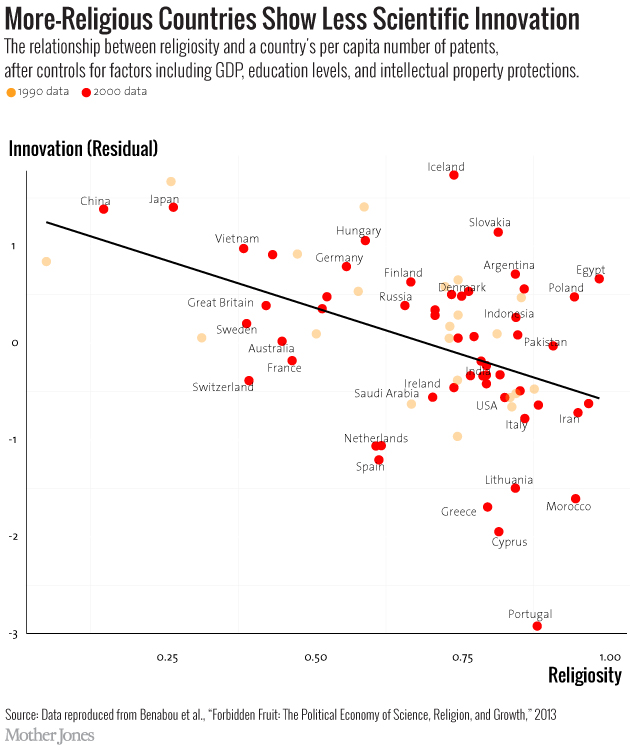 Note that Japan and China clearly stand out as highly secular, highly innovative countries. At the other extreme, meanwhile, we find nations like Portugal, Morocco, and Iran. (The full analysis in the study also included data from the years 1980 and 1995; those are not shown here. Only country data from the year 2000 are labeled above.)

One important point of to keep in mind before comparing individual countries with one another: The figure above should not be interpreted as saying (for example) that China produces more patents per capita than the United States. Indeed, that isn’t actually true: While Chinese residents filed more total patent applications (560,681) in 2012 than citizens of any other country including the United States (460,276), the US still filed more patents per capita, since its population is less than a third of China’s. Rather, what this result means is that after controlling for other factors, China appears to have more unexplained innovation “left over” than the United States. (For stats nerds: What we are talking about here is the residual after a regression analysis.) It is this leftover or residual value—the differences in innovation that can’t be explained by other factors—that the researchers are saying is associated with religion.

The authors then apply a similar analysis to the 50 US states, this time using patent data from the US Patent and Trademark Office and religion questions from a 2008 Pew Survey, including the following: “How important is religion in your life: very important, somewhat important, not too important, or not at all important?” Here’s the result, after controls for the gross state product per capita, state population, and educational levels: 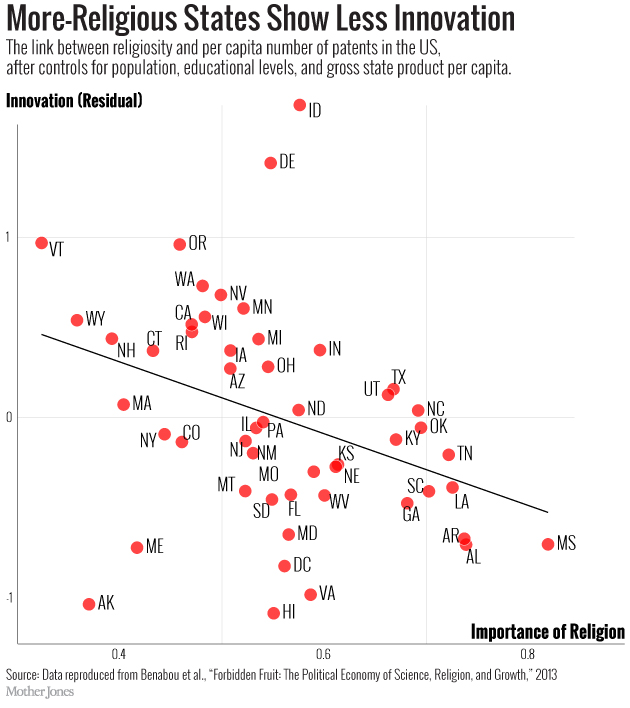 Note that states like Vermont and Oregon are highly innovative and not very religious, whereas innovation lags in states like Arkansas and Mississippi, even as religion thrives. The authors note in their paper, however, that while the Bible Belt states tend to show the most religion and least innovation, the finding does not depend on them. “The negative association holds throughout the sample,” they write.

Once again, before going and trying to compare states with one another: Keep in mind that the figure above does not mean that Delaware or Idaho produce more patents per capita than Massachusetts or California. Once again, it simply means that Delaware and Idaho have more “left over”—or residual—innovation after other factors are controlled for.

It is important to keep in mind that these findings are correlational in nature; the authors explain that they do not allow for “definite causal inferences to be drawn.” Their own view is that causation probably “goes both ways”: Religiosity stifles innovation, but at the same time, innovation and science weaken religiosity. Or as they put it: “In both international and cross-state U.S. data, there is a significant negative relationship between religiosity and innovativeness (patents per capita), even after controlling for the standard empirical determinants of the latter.”

Explaining in more detail, Bénabou notes that he thinks that much comes down to the political power of the religious population in a given location. If it is large enough, it can wield its strength to block new insights. “Disruptive new ideas and practices emanating from science, technical progress or social change are then met with greater resistance and diffuse more slowly,” comments Bénabou, citing everything from attempts to control science textbook content to efforts to cut public funding of certain kinds of research (for instance involving embryonic stem cells or cloned human embryos). In secular places, by contrast, “discoveries and innovations occur faster, and some of this new knowledge inevitably erodes beliefs in any fixed dogma.”

So what do other scholars think? “It is a very important finding. And it is done well and correctly, using state of the art techniques,” comments Joel Mokyr, an economic historian at Northwestern University who is familiar with the Bénabou et al. paper (he is thanked in the acknowledgments). Mokyr admits that “innovation is hard to quantify,” but one reasonable way to do it—if still imperfect—is to “count patents.”

Doing so, it would seem, lends support to the science-religion conflict thesis: the idea that in places where religion predominates, inquiry truly does take a hit.