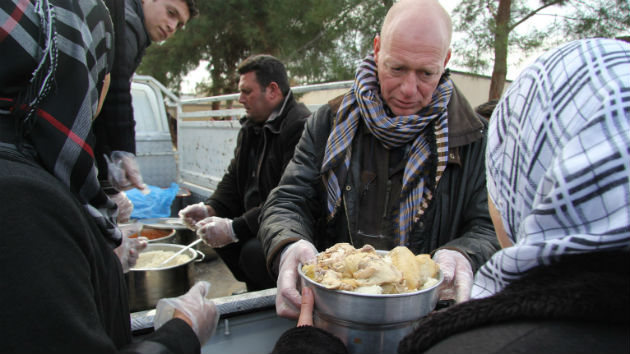 Last Friday, Oscar Bergamin, a Swiss humanitarian aid worker helping refugees in northern Syria, wrote a tweet that included 18 digits. They were the coordinates of a bunker near the Turkey-Syria border that had been seized by members of ISIS, the self-proclaimed Islamic State that’s terrorizing large chunks of Iraq and Syria. The tweet caught the eye of ISIS-affiliated accounts on Twitter, which sent out a barrage of threatening messages to Bergamin, warning that they were “coming for Mr. Aid Worker,” and that he would be beheaded. (Two weeks ago, ISIS beheaded British aid worker David Haines and holds another British aid worker, Alan Henning, hostage.)

Bergamin, the president of a Swiss humanitarian aid organization called Ash-Sham CARE, says that the bunker he tweeted about is “no secret at all” and can be seen from miles away. He says he intentionally shared the bunker’s location so that the US military might destroy it.

The day before he tweeted the coordinates, Bergamin was perched outside the bunker, taking photos and watching out for civilians. On Twitter, he asked the US Central Command and “all followers” to “just blow it away!” Bergamin tells Mother Jones that a “fit of cynicism” prompted his messages. With as many as 18,000 refugee families are trapped just beyond the bunker, he felt helpless and angry at ISIS. 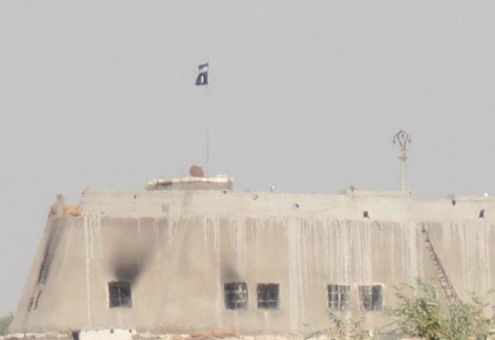 The ISIS bunker on the Turkey border Oscar Bergamin

After his tweets, Bergamin received death threats over Twitter in clear, direct English, forcing him to make his account private. Some ISIS accounts have tweeted pictures of his LinkedIn and Twitter accounts and pictures of him, claiming that Bergamin is a CIA agent who needs to be killed. Bergamin is not disclosing his current whereabouts for his own safety.

Following Bergamin’s tweet and the ongoing US air offensive against the Islamic State, Twitter accounts connected to the group have issued a media blackout and have clammed up about its movements and locations.

Bergamin founded Ash-Sham CARE in November of 2011 along with “a group of concerned people especially worried about the appalling humanitarian situation in Syria.” The group focuses on providing emergency humanitarian assistance, primarily in northern Syria. According to Bergamin, the group is “largely unnoticed by the public” and receives little funding. Though its team is small, he says it has built an excellent network throughout Syria.

Located at the Turkish border on the eastern side of the Euphrates River, the bunker was held by the Free Syrian Army before ISIS. Bergamin says that “there are almost every day clashes there between Kurds and ISIS” near the bunker and that the area has been basically unreachable since ISIS took the town of Jarabalus and massacred many civilians in January. Prior to the siege, Bergamin’s organization provided aid to five camps for internally displaced persons in the city. The bunker currently blocks the way to the camps.

Bergamin now admits that the tweets may not have been a good idea, and that his anger and frustration may have gotten the better of him. Humanitarian groups tend to remain neutral in war zones; the International Red Cross’s fundamental principles of humanitarian work include impartiality and neutrality.

Other Twitter users have questioned Bergamin, telling him that he has put lives at danger by provoking ISIS. “Giorgio” wrote to Bergamin, “your tweet is being used by IS affiliates on twitter to prove that aid workers aren’t peaceful people, hence can be hit,” to which Bergamin replied, “Unfortunately.”

Bergamin notes that while he gave ISIS an opportunity to lash out at aid workers and journalists, the coordinates of the bunker are not especially secret at all: He pulled its location from Wikimapia. “Reactions show ISIS has been waiting for something like this,” he writes in an email. “I am neither a spy or working for CIA. It’s as if I send the secret coordinates of the Eiffel Tower in Paris…it’s ridiculous.”