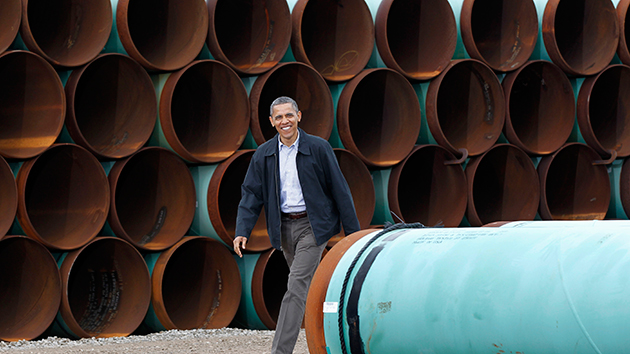 President Obama walks between sections of pipeline destined for the southern stretch of the Keystone XL pipeline.Pablo Martinez Monsivais/AP

UPDATE (11/18/14, 6:17 pm ET): A controversial bill to approve construction of the Keystone XL oil pipeline failed in the US Senate Tuesday evening. It received 59 “aye” votes, just shy of the 60 needed to send the bill to President Obama’s desk. The fight isn’t over yet; Republicans have said they plan to prioritize approving the pipeline once they take control of the Senate next year.

Below the headlines last week about President Obama’s major climate agreement with China, another environmental story was gaining steam: a vote in Congress to force approval of Keystone XL, a controversial pipeline that would carry crude oil from Canada down to refineries on the Gulf Coast. On Friday, the House voted overwhelmingly in favor of the pipeline, as it has done numerous times in the past. The Senate is expected to vote on an identical bill today. Previous Keystone legislation has always stalled in the Senate due to opposition from Democrats. But the vote Tuesday will likely have more Democratic support than ever before, making it the closest the pipeline has yet come to approval.

Here’s what you need to know:

What’s happening with Keystone this week?
As of Sunday, according to Senate Majority Whip Dick Durbin (D-Ill.), the bill is still one vote shy of the 60 it would need to break a Senate filibuster, pass Congress, and land on the president’s desk. If enacted, the legislation would green-light a construction permit for the pipeline, removing that authority from the State Department, which currently has the final say because the project crosses an international border. President Obama has said that his administration would only approve the project if it didn’t increase total US carbon emissions; a State Department report in January suggested that the pipeline was unlikely to affect America’s carbon footprint because the oil it would carry would get exported and burned one way or the other. But the final decision was postponed indefinitely in April and is awaiting the outcome of a court case in Nebraska that could alter the pipeline’s route. Congressional Republicans have accused Obama of willfully kicking the decision down the road for as long as possible; on Thursday Senate Minority Leader Mitch McConnell (R-Ky.) said this week’s vote was long overdue after years of the administration “dragging its feet.”

Why is the vote happening now?
When Republicans take control of the Senate next year, with a host of new climate skeptics in tow, they could pass a new round of Keystone legislation—perhaps even with enough support to override a presidential veto. So why rush? The answer revolves around the Senate race in Louisiana, where incumbent Democrat Mary Landrieu is locked in a runoff campaign with Republican challenger Bill Cassidy, who currently serves in the House. The special election is scheduled for December 6, and Landrieu appears to be trailing Cassidy. Landrieu represents a state with close ties to the oil industry, and she has long been one of the pipeline’s most vocal advocates. Last week she introduced the Keystone bill in what many on Capitol Hill have described as a last-ditch political maneuver to score points with her constituents before the runoff. Cassidy introduced the House version of the bill shortly thereafter.

This morning, anti-pipeline activists set up shop in front of Landrieu’s residence in Washington:

A pipeline has gone up on Sen Landrieu’s front lawn as ClimateChange activists protest expected up vote @350 #NoKXL pic.twitter.com/aixaZF0Vpd

If the bill passes, will President Obama sign it into law?
Probably not. At a press conference in Burma last week, Obama said that his “position hasn’t changed” and that the approval process should go through the proper State Department channels. It’s hard to imagine that after all of Obama’s statements on Keystone’s carbon footprint, the approval process, and his series of climate promises last week, he would capitulate on the pipeline merely for the benefit of one Senate Democrat who appears unlikely to win anyway. It seems more likely that he would save Keystone approval as a bargaining chip to keep the GOP-run Congress from attacking his other hard-won climate initiatives. We’ll have to wait and see how this all plays out over the next few days.