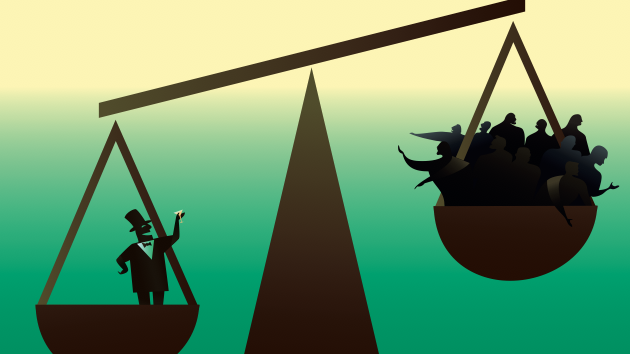 The wealth gap between the richest 20 percent of Americans and everyone else is the widest it’s been in three decades, according to a report released last week by the Pew Research Center. Many factors contribute to this great divide: tax rates on the rich have been falling for decades; the Great Recession decimated the assets of a lot of low- and middle-income folks; and technology is replacing workers. One often-overlooked  factor, though, is that 16.7 million poor Americans don’t have a bank account. Lack of access to this basic financial tool cramps poor Americans’ ability to prove credit-worthiness and build assets, and forces them to rely on expensive alternative financial services, trapping them in a cycle of debt and instability.

Here’s a look at banking access in the US and how it affects Americans’ ability to grab onto the lowest rung of the socioeconomic ladder.

Many more people in the US lack bank accounts than in other wealthy developed nations, according to the latest World Bank data, which is from 2011.

The percentage of Americans without bank access has fluctuated since the Great Recession. In 2009, 7.6 percent of Americans lacked a bank account. In 2011, that number was 8.2 percent, and in 2013, 7.7 percent—or approximately 16.7 million adults—had no banking access, according to the Federal Deposit Insurance Corporation (FDIC).

Eighteen percent of people in the bottom 40 percent of the income spectrum lacked an account at a formal financial institution in 2011, according to the World Bank. Non-whites are less likely to have a bank account:

The main reason people don’t open bank accounts is that they lack sufficient funds to open one or can’t afford the fees associated with the account. But some people simply don’t trust financial institutions.

“Even plain vanilla checking accounts have gotten more expensive,” Abby McCloskey, a program director at the American Enterprise Institute, wrote at Forbes last year. “Free checking was long championed by the FDIC to bring the unbanked into mainstream banking, and it has all but disappeared as banks cut costs.” (The Consumer Financial Protection Bureau, which Congress created in the wake of the 2008 financial crisis to protect average Americans from banks’ predatory practices, is weighing new regulations on overdraft fees.)

Not surprisingly, low-income people with access to bank accounts are more likely to save money and have better overall economic health. Check it out.