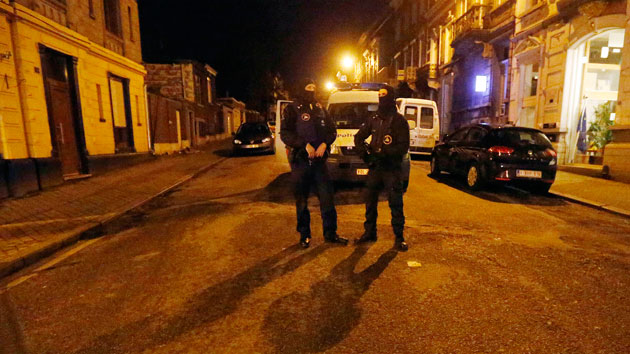 Belgian police officers guard the street where a shoot-out between suspects and police left two alleged terrorists dead and one in custody.Frank Augstein/AP

Following the Paris attacks that left 17 dead and amidst warnings that there may be as many as 20 jihadist sleeper cells throughout the European Union, at least four European nations have launched anti-terror operations. From Belgium, where suspected Islamic radicals skirmished with police, to Ireland, where an alleged radical was arrested as he tried to enter the country, some 24 suspects have been arrested across Europe. Here’s what we know about the raids and arrests that have played out over the past couple days.

Belgium: Early Thursday evening, Belgian police shot and killed two men, and arrested a third, during an intense ten-minute gun battle in the eastern Belgian town of Verviers. Belgian police and prosecutors claim that these men, Belgian citizens, had recently returned from Syria, were heavily armed, and had imminent plans to attack police officers and police stations in Belgium. Their identities have not been released, but witnesses claim they were dressed all in black and were carrying black bags. Officers seized police uniforms, heaps of money, explosives, guns, and munitions from the suspects. No police officers were wounded in the shoot-out. “The operation was meant to dismantle a terrorist cell…but also the logistics network behind it,” Eric Van Der Seypt, a Belgian prosecutor, told reporters.

Following the stand-off, police in Belgium arrested 13 additional suspects throughout the country. According to Van Der Sypt, the investigation that led to the arrests was initiated before the Paris massacre occurred. The Belgian authorities are investigating any ties the Belgian suspects might have had with the Paris attackers—especially to Amedy Coulibaly, the gunman who killed four hostages before he was gunned down by police at a kosher market north of Paris. Police are investigating whether Coulibaly may have purchased weapons from a Belgian arms dealer, after confirming that he sold the dealer a car belonging to his partner Hayat Boumeddienne, who remains at large. Right now, there are no direct connections.

France: In neighboring France, police reportedly arrested around 12 additional suspects in Paris in connection to the Charlie Hebdo shootings. These suspects allegedly have ties to the Kouachi brothers, who attacked the Charlie Hebdo offices, held up a gas station, and holed up at a print shop before police killed them. NPR’s Eleanor Beardsley reports that the suspects were members of the Paris attackers’ “entourage” and may have helped plan or finance the attacks.

Germany: In Germany, where tensions over massive anti-Islam, anti-immigration protests have grown over the past week, Berlin police reportedly arrested two men suspected of having ties to the Islamic State, or ISIS. The two men are believed to have been recruiting, raising money, and obtaining supplies for ISIS. Around 250 police officers stormed Berlin streets, searching 11 homes, in what police described as part of a months-long investigation into a small terrorist cell in Germany. However, police claimed they did not have reason to believe the group posed an imminent threat.

Ireland: The terrorism crackdown extended as far as Ireland, where a French-Algerian national, a suspected jihadist, attempted to enter Dublin at the airport. He is currently being held by the police and questioned about fake documentation, after the police were tipped off by international agencies monitoring the man.