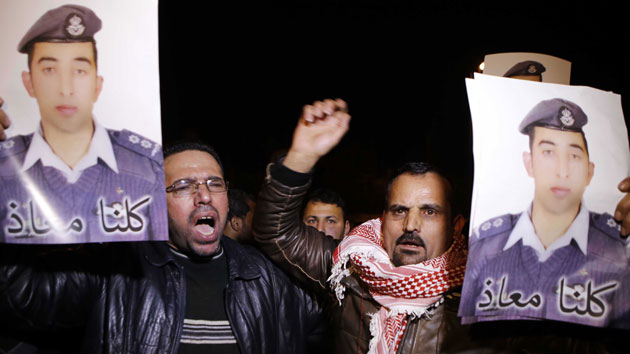 On Tuesday, ISIS released the latest in a series of gruesome filmed murders of its foreign captives. This time, it was the execution of 1st Lt. Moaz al-Kasasbeh, a celebrated Jordanian pilot whom the group had been attempting to exchange for Sajida al-Rishawi, a female failed suicide bomber from Iraq who was being held in a Jordanian prison. Kasasbeh was the first pilot in the 60-member US-led coalition fighting ISIS to be caught, and relatives in Amman and officials throughout Jordan are outraged at his death. In retaliation, Jordan executed the Iraqi woman and one other Iraqi jihadist by hanging early Wednesday morning.

“Burning someone alive is absolutely barbaric, and it is expressly forbidden in Islam,” said one Middle East expert.

In the execution of Kasasbeh, ISIS departed from its usual approach of beheading a captive: It burned Kasasbeh alive in a metal cage and filmed it. Aside from the unremitting cruelty of this act, for nearly all Muslims, it is also close to sacrilege.

“Burning someone alive is absolutely barbaric, and it is expressly forbidden in Islam,” Emma El-Badawy, a Middle East expert from the University of Exeter, told Sky News, a UK-based news station. The Council on American- Islamic Relations (CAIR) held a press conference in response to the act, where Nihad Awad, the national director, called it “unspeakable and anti-Islamic.” Hussam Ayloush, the director of CAIR in Los Angeles, noted, as many Islamic clerics have, that ISIS should not even be compared to Islam, as it does not fit the category of an Islamic group, but rather a “murderous terrorist cult.”

Activists in Syria from Raqqa Is Being Slaughtered Silently, a group reporting from the ground in the ISIS stronghold of Raqqa, were shocked and initially incredulous. Abu Ibrahim al-Raqqawi, the pseudonym of an activist following ISIS’s occupation in the radical group’s stronghold in Raqqa, Syria, told the Daily Beast: “I know that in Islam, there is no excuse to burn someone to death, so I thought they were lying,” referring to a friend recounting tales of ISIS members gloating about the pilot’s death.

Even cremation is not acceptable in the Islamic faith. “To honor the dead is to bury them,” reads a Muslim hadith, or prophetic teaching attributed to the Prophet Muhammed. Sheikh Muhammed Saalih al-Munajjid, a respected Muslim scholar in the Salafi school of thought, posted on a well-known Islamic information website that he manages: “It is not prescribed in Islam to burn or cremate the dead, rather this is an act of disrespect and dishonour. Islam forbids us to step, walk or sit on the grave of the deceased, so how could we burn him?”

ISIS members, anticipating criticism, were quick to launch a PR counteroffensive online. ISIS published a post titled “Moaz Was Burnt Alive, Below Is the Islamic Justification for Such an Act.” It claims that “scholars” (who are never directly quoted or named) say it is acceptable to burn victims in the modern day, and the post gives instructions to jihadists on how to argue with clerics who might complain that burning is un-Islamic. Commenters on the post began to cite other lines from the Koran could justify the decision to burn the pilot. Some commenters claimed it was retaliation for ISIS fighters who died in air strikes, who may have been burned.

The immolation has further alienated ISIS from the broader Muslim world. The Qatari based International Association for Muslim Scholars issued a statement condemning the pilot’s murder as criminal: “The Association asserts that this extremist organization does not represent Islam in any way and its actions always harm Islam.”

Abu Sayaf, a Jordanian Salafist cleric who spent a decade in Jordanian prisons, in part because of his role in plans to attack the US military, agrees. “This weakens the popularity of Islamic State because we look at Islam as a religion of mercy and tolerance,” he told Reuters. “Even in the heat of battle, a prisoner of war is given good treatment. Why film the video in this shocking way?”