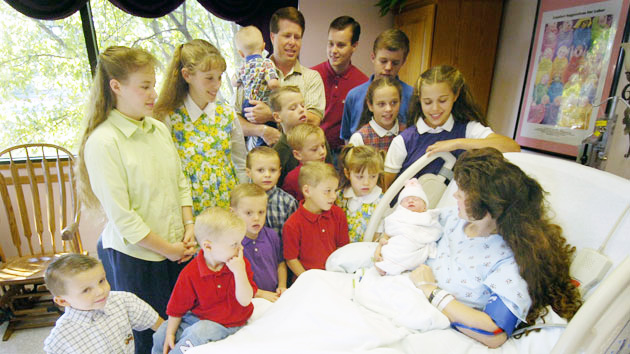 It may be that the fastest-growing demographic in the Republican Party is pro-life, telegenic, homeschooled, and mostly under the age of 27—you know, the Duggars. As in the stars of the TLC reality show 19 Kids and Counting.

In the past couple election cycles, this birth-control-shunning family has emerged as a political player on the right. And now it looks likely that they will face a tough decision when it comes to which social conservative GOPer to back in the 2016 presidential race. The Arkansas clan helped propel Arkansas Gov. Mike Huckabee to victory in the Iowa caucuses in 2008. And they did it with Rick Santorum in 2012. Now, with both Huckabee and Santorum considering presidential campaigns this year, the Duggars may have to choose between them. Or might they dump both for a new favorite?

Huckabee says he won’t make a decision about the race until the spring, but he has already been courting the family’s support. The former Fox talking head praised the Duggars in his new book God, Guns, Grits, and Gravy, and he told People magazine in January that they were an “example of something that’s wholesome and wonderful.”

“If I can get ’em registered in each of the states,” he told the magazine, “I’m going to win just by virtue of their votes!”

Huckabee’s relationship with the Duggars dates back to his time as governor of Arkansas, where Duggar patriarch Jim Bob served as a Republican state representative. In 2004, Huckabee gave the family matriarch Michelle Duggar—then a mom of 14—the state’s Young Mother of the Year Award in a ceremony at the state capitol (Hillary Clinton was a previous winner). When Huckabee campaigned for president in 2007, Jim Bob endorsed him. He traveled to Iowa to troll Huckabee’s chief rival, Mitt Romney, alleging at a campaign event that the Massachusetts governor’s health care plan included a “$50 co-pay for abortions.”

Jim Bob, who did not respond to a request for comment, shares something else with Huckabee—a spokesman. When I called the media number listed on the Duggar family website, I was told to speak with Chad Gallagher, an Arkansas political consultant who is also executive director of Huck PAC, the ex-governor’s presidential-campaign-in-waiting.

Had Huckabee run in 2012, it’s a good bet that the Duggars would have backed him again. But when Huckabee passed, the clan gravitated to the next best social conservative—Santorum, an anti-abortion advocate and a father of seven homeschooled children. They Duggars rolled into Iowa on the family bus in the final weeks before the Iowa caucuses, stumping for Santorum. They even provided the candidate with a sound system, purchased at Radio Shack, to speak to larger crowds. At the former senator’s victory party, the family showed up in full force, providing the crowd with a celebrity sideshow.

Following the 2012 election, the family cemented its place as conservative power players when Josh Duggar, the couple’s eldest son, was tapped as executive director of FRC Action, the political arm of the social-conservative group founded by James Dobson. The job, which brought Josh to Washington from rural Arkansas, drew him closer into the orbit of potential presidential hopefuls. It also puts him in charge of a well-funded political machine capable of mobilizing pro-life, anti-gay-marriage voters during Republican primary elections.

So which way is Josh leaning these days? In January, he appeared at a rally sponsored by Patriot Voices, Santorum’s political non-profit, and he implored conservatives to “stand behind” Santorum and “give him support.” But he was more guarded at a reception on Saturday at the Conservative Political Action Conference outside Washington, DC, where a procession of eager millennials waited to have their photo taken with Josh and his pregnant wife, Anna. The couple’s three small children sat quietly in the back of the room, supervised by the Duggars’ onetime wedding coordinator, who was serving as a babysitter.

Asked about the family’s 2016 decision, Josh said, “I would just say that we have a lot of friends who are running this year and we hope that all of them run, I’ll put it that way. [Huckabee’s] been a good friend of ours for a number of years. That’s pretty clear. People know that. I also think that Rick Santorum has been a tireless defender of the issues that are very close to our heart.” He even tossed out another possible contender for Duggar seal of approval. “When you look at the lineup, I’m also a big fan of Ted Cruz.”

And what about another Duggar family road trip to Iowa on the old bus to stump for whoever wins the family’s endorsement? “I wouldn’t rule it out—we’ll see.”