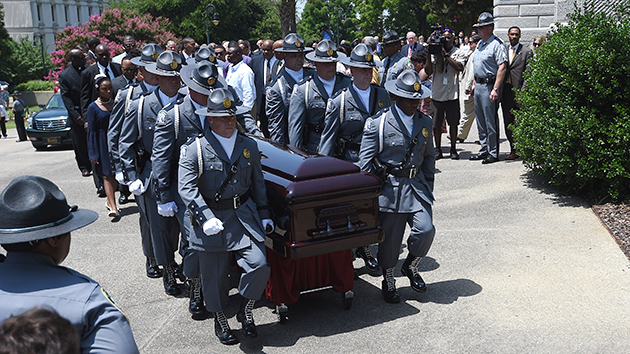 As South Carolina gay rights advocate Jeff Ayres lobbied lawmakers earlier this year to stop a wave of anti-gay bills in the statehouse, he went to speak with state Sen. Clementa Pinckney, the charismatic legislator and church pastor slain alongside eight other congregants in last week’s racially motivated mass shooting.

“He gave me his assurance then that he was on our side,” says Ayres, the chairman of South Carolina Equality. The South Carolina Legislative Black Caucus, of which Pinckney was a member, “always has our backs, and has always been there unconditionally to support the LGBT community,” Ayres told me in an interview, echoing sentiments from other gay rights advocates and two lawmakers who worked with Pinckney.

A Supreme Court ruling on gay marriage just ahead of Pinckney’s funeral on Friday would make for an extraordinary confluence of narratives around civil rights.

Last week’s massacre at Charleston’s Emanuel AME Church has thrust South Carolina politics to the forefront amid a painful, contentious national debate about racism and the legacy of segregation. As President Obama prepares to commemorate the life of the Rev. Pinckney on Friday, another struggle for equality—the one for gay rights—will be close at hand, and in its own right marked by Pinckney’s legacy as an influential civil rights leader. With a ruling imminent on gay marriage, the US Supreme Court could potentially clear the way for same-sex couples across the country to wed, just an hour before Obama is due to deliver a eulogy for Pinckney at his funeral, making for an extraordinary confluence of national narratives around civil rights.

(Update: On Friday, the Supreme Court ruled in favor of gay marriage in the historic case of Obergefell v. Hodges, a decision which effectively invalidates bans on gay marriage. Read the opinion here.)

Obama will be eulogizing a man who, by all accounts, was a defender of all minorities in his community. “The Clementa Pinckney I knew was a man of faith who believed that all God’s children were equal and loved,” said Gilda Cobb-Hunter, an African American state representative and self-described “lone ranger” on gay rights issues in the statehouse. Cobb-Hunter stopped short of ascribing specific gay-rights attitudes to Pinckney—wary, she said, of reaction from certain quarters of the black religious community in South Carolina, which she described as persistently homophobic. But she described Pinckney as “a tolerant man,” and said that the legislative black caucus “has traditionally been consistently supportive of LGBT issues.”

Pinckney never uttered a discriminatory word, agreed state Sen. Brad Hutto, who has sponsored anti-discrimination bills in the statehouse. “That would not be his style.”

Pinckney voted against a bill last year that sought to punish two of the state’s largest public colleges for the introduction of books with so-called gay themes, including Fun Home, by Alison Bechdel, which was developed into the Tony Award-winning off-Broadway musical. Still, his record on the issue is far from perfect, especially going back a few years when progress on gay rights in America was much less further along. Along with all but one state senator, Pinckney voted to ratify the state’s constitutional amendment in 2007 banning gay marriage. (In November last year, US District Court Judge Gergel ruled in favor of the freedom to marry in South Carolina, striking down that ban.)

Pinckney was a man “who believed in social justice for all people,” says a GLAAD leader in South Carolina.

But more recently he participated in the cause. “We’d be able to count on him when the chips are down,” said Malissa Burnette, an attorney who is helping to fight the legal case at the center of the state’s complex battle over same-sex marriage. “Sen. Pinckney would be among our troops,” she told me by phone from Columbia, where on Wednesday Pinckney’s open casket was placed on display at the statehouse with an official ceremony. Pinckney and the Black Caucus “had the same opponents in the legislature, and that made us form bonds.”

A personal friend of Pinckney going back 20 years, Zeke Stokes remembers him as a man “who believed in social justice for all people.” Stokes, a native of the state and now a vice president with GLAAD, added, “He said ‘loving God is never separate from loving your brothers and sisters.’ So he really did see community service and taking care of your neighbors and your community as the same thing—as inextricable—with your faith in God and religion.”

It would not be surprising if on Friday Obama were to explicitly link gay rights and civil rights for the African American community, as he has done before. In his 2013 inaugural address, Obama said equality for all “is the star that guides us still; just as it guided our forebears through Seneca Falls, and Selma, and Stonewall,” referring to the early hours of Saturday, June 28, 1969, when patrons in a New York City bar decided to rebel en masse against a routine police raid to clear out homosexual “deviants.”

South Carolina has seen some progress: Six anti-gay bills were introduced in the last legislative session, and all failed to get out of committee for a vote, according to the Human Rights Campaign, a national LGBT rights group. That was a big deal, said Cobb-Hunter. “Trust me,” she said, “when you live in a state as red as South Carolina, simply stopping bad legislation is a victory.”

Should the Supreme Court indeed hand down its ruling on marriage equality this Friday, “it’s gonna be a real emotional day,” said Ayres, who plans to attend Pinckney’s funeral. (The iconic Mother Emanuel, the church Pinckney led as pastor, is far too small for the throng of mourners expected; the funeral will be held at an arena at the College of Charleston.)

“I need to be at this funeral to show that we are in full support of ending social and racial injustice, and promoting equality across our state,” Ayres said. “I need to let all of our allies know, and show the community and his family and all the South Carolina LGBT community standing strong with them.”

But if the Supreme Court votes in favor of nationwide marriage equality, it won’t mean the fight is over in South Carolina, said Cobb-Hunter, who is bracing for an election year in which “red meat is in short supply.”

“This is South Carolina,” she said. “I fully expect there will be efforts made to defy the court ruling. I hope I’m wrong. But I will not be surprised.”