Mohammed Al-Harazi was eating breakfast with his family one morning in late April when the first rocket struck across the street from his home in Sana’a, Yemen. The 49-year-old ushered his children and wife into the basement, went to fix a window in the children’s room, and then he heard the warplanes overhead. When he ran to close the door, the pressure from the next explosion, much larger than the first, sent him flying from the building. 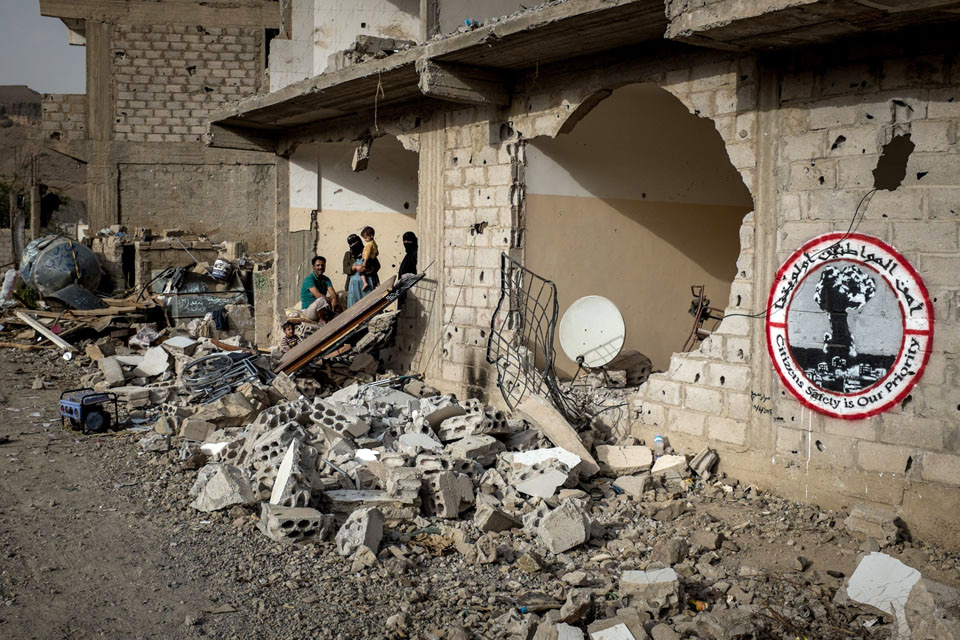 Yahya Maasar and his family live in the ruins of a neighbor’s house after their own was destroyed by bombing in one of Sana’a’s most heavily bombed areas. Adam Bailes

He doesn’t recall the next moments clearly, only that there was continued bombing and a rain of shrapnel and football-sized rocks. After it was all over, he was elated to find his family alive—though his house had been reduced to rubble. His body riddled with shrapnel and his hand broken, Harazi took himself to the hospital on foot. On his way, he encountered 14 dead bodies. Inside the machine shop where his neighbors worked, he saw a man he knew shaking on the floor. Harazi recalled to photojournalist Adam Bailes, “I watched his last moment of breath before he died.”

Saudi Arabia, backed by the United States, the United Kingdom, and a coalition of Arab nations, has been bombing Yemen for several months in  support of the Yemeni government. The Saudi-led coalition has been fighting since March, when Houthi rebels from northern Yemen ousted President Abd Rabu Mansour Hadi. While Saudi Arabia claims that it is targeting Houthi fighters and military installations, human rights groups and the United Nations have found the coalition’s air campaign has mostly affected civilians. Since March, more than 2,000 civilians have died and another 4,000 have been injured, most of them killed in the air campaign, according to the UN High Commissioner for Human Rights. A new UN report states that 86 percent of casualties in the ongoing violence have been civilians. 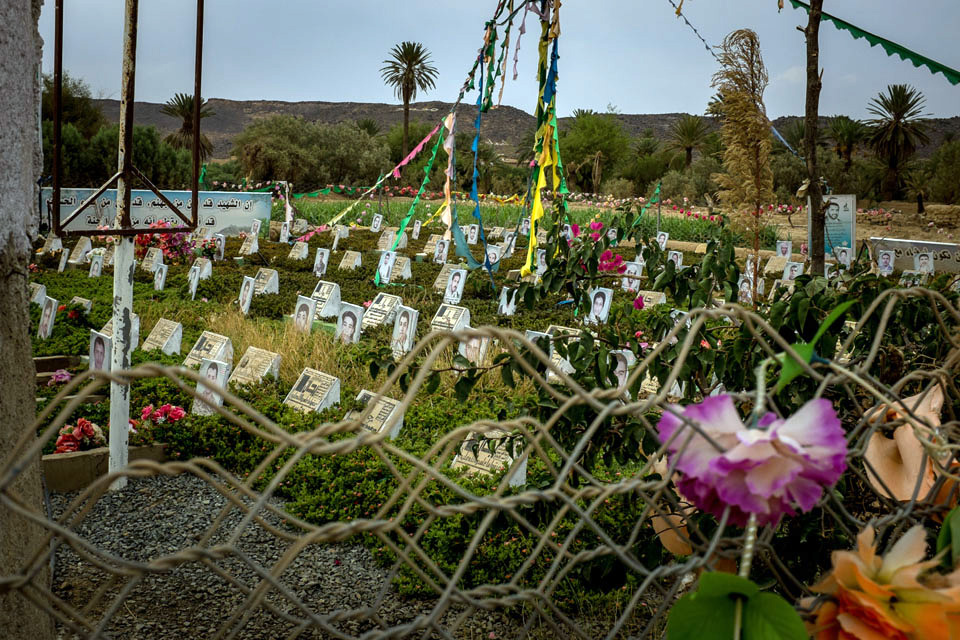 In the Al Sufra district, fresh graves lie alongside those of Yemenis who died in previous conflicts. Adam Bailes

The Saudi coalition has repeatedly targeted schools, hospitals, and religious buildings. Civilian infrastructure, including a camp for displaced people, water supplies, and power stations, have been destroyed. Civilian hospitals—overloaded with patients injured by airstrikes yet painfully under-supplied because of coalition blockades—are nearing collapse. In late June, the UN envoy to Yemen said the country was “one step away from famine.” And in August, the UN’s World Food Programme said the blockades were contributing to pushing 6 million of the country’s inhabitants to the brink of starvation. Peter Maurer, the head of the International Committee of the Red Cross observed, “Yemen after five months looks like Syria after five years.”

A UN statement that described the conflict as “beyond tragic” recently noted that “indiscriminate attacks and attacks against civilians and civilian objects may constitute war crimes.” Meanwhile, 1.5 million Yemenis are internally displaced—five times what it was last December—and thousands are fleeing the country every week, leading some to wonder whether Yemen will be the next refugee crisis to hit Europe. 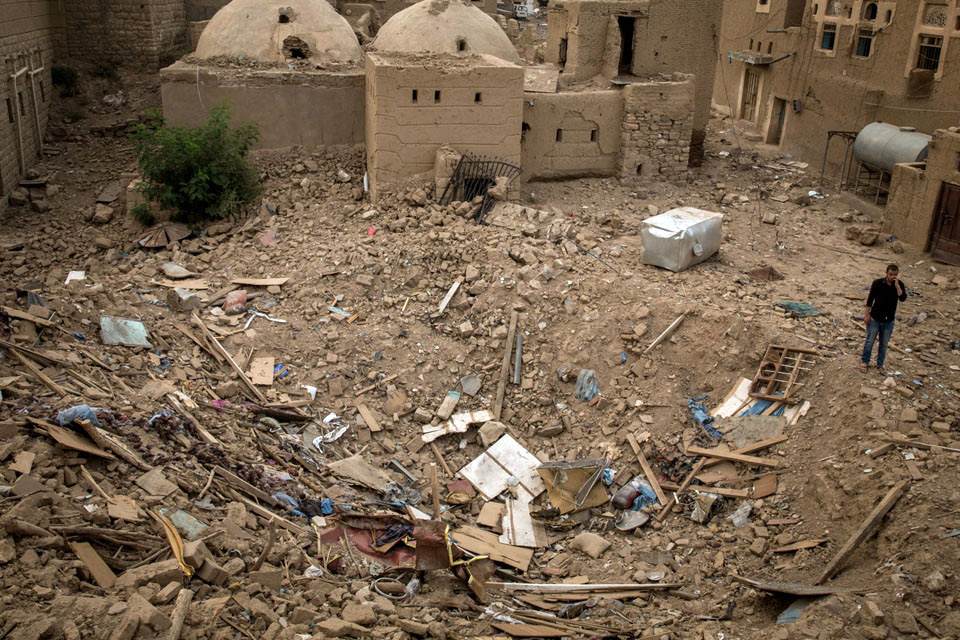 A bomb crater marks what used to be a three-story house inside the old city of Sa’dah, in northwest Yemen.. Adam Bailes 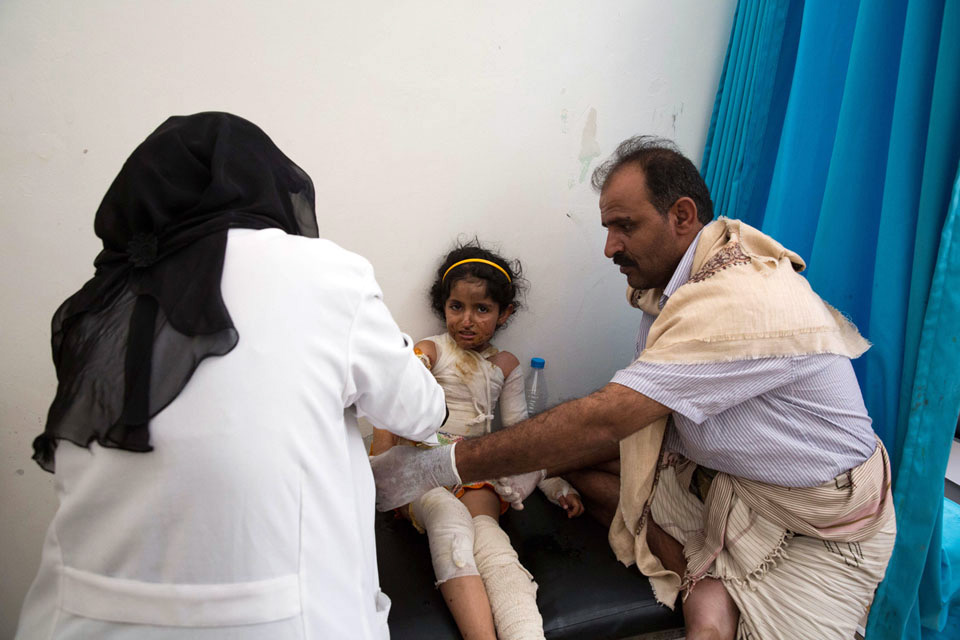 A young girl with third-degree burns is treated at Sana’a’s Al-Jumhori Hospital, which has the only burn ward in the country. Adam Bailes

Bailes, who had been documenting the war’s civilian toll since July, was recently forced to leave the country by Houthi officials.

Back in the Sana’a neighborhood where Harazi’s home was destroyed, 22-year-old Zakaria Abdullah, described the war in pointed terms: “The day of the explosion, the street was so full of blood that you could not walk on the main road that you see over there.” That airstrike left 85 dead and 300 injured, and forced some 2,000 people from their homes. Abdullah told Bailes, “We do not support either of the two sides fighting. We are not with the strikes or against the strikes. We are under the strikes.” 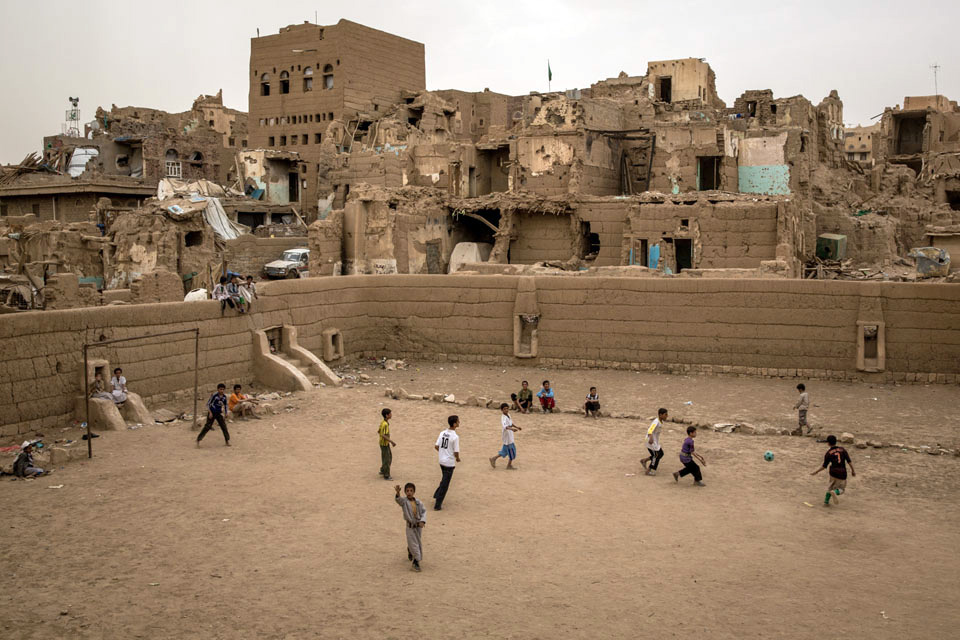 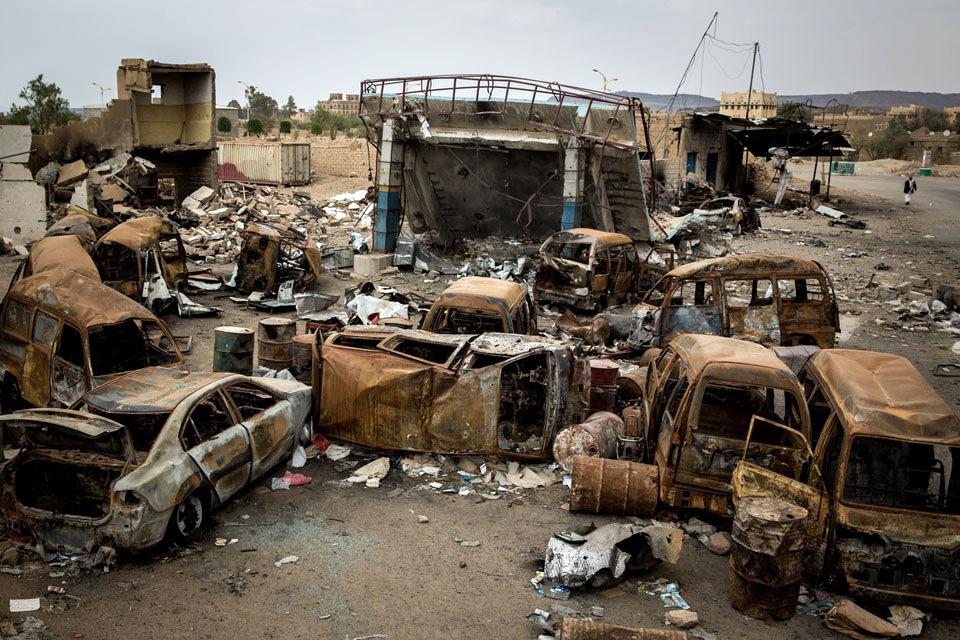 Fifteen people were killed while waiting for fuel in April when an airstrike hit this gas station in Sa’dah. Adam Bailes 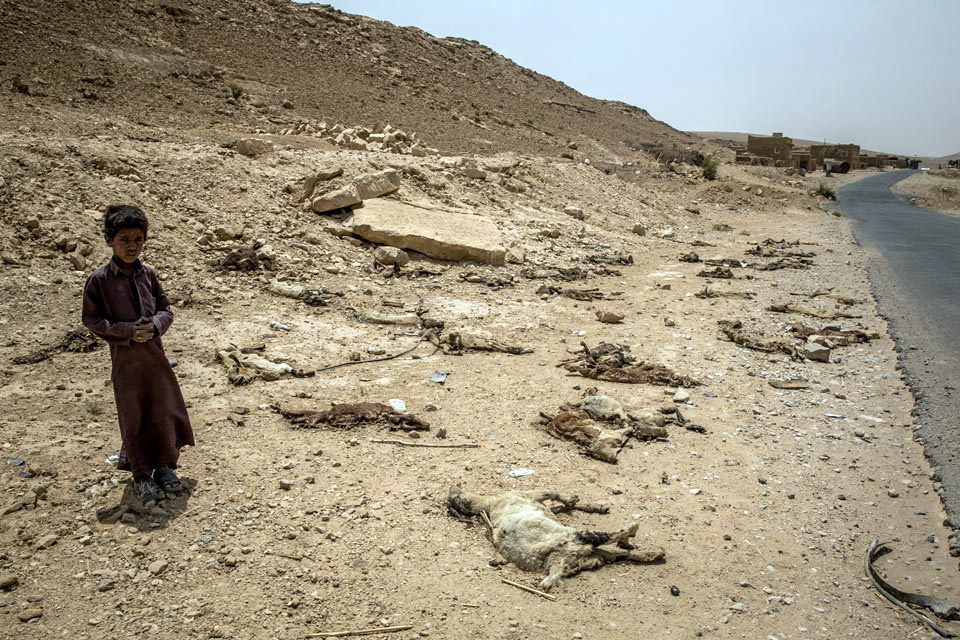 Dead livestock line the road after a coalition jet attacked a truck carrying animals to market. Almost all of the of vehicles destroyed on the road between Sanaa and Sa’dah have been civilian. Adam Bailes 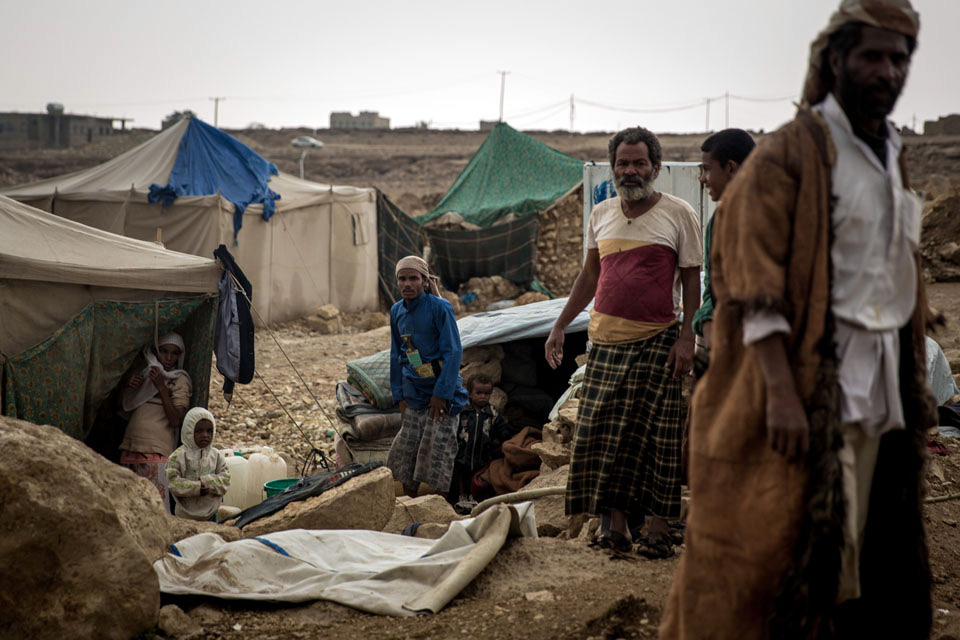 Al Muhamasheen, a marginalized group at the bottom of Yemeni society, make up a large percentage of those living in camps for the displaced. Adam Bailes 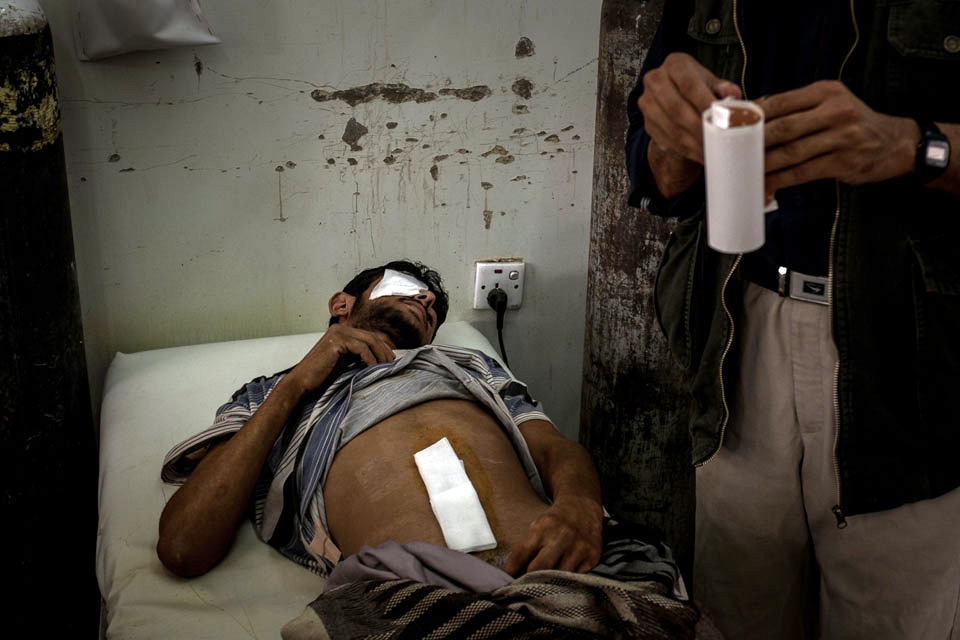 At a hospital in Sa’dah, a young man is treated for injuries suffered in a coalition airstrike. Adam Bailes 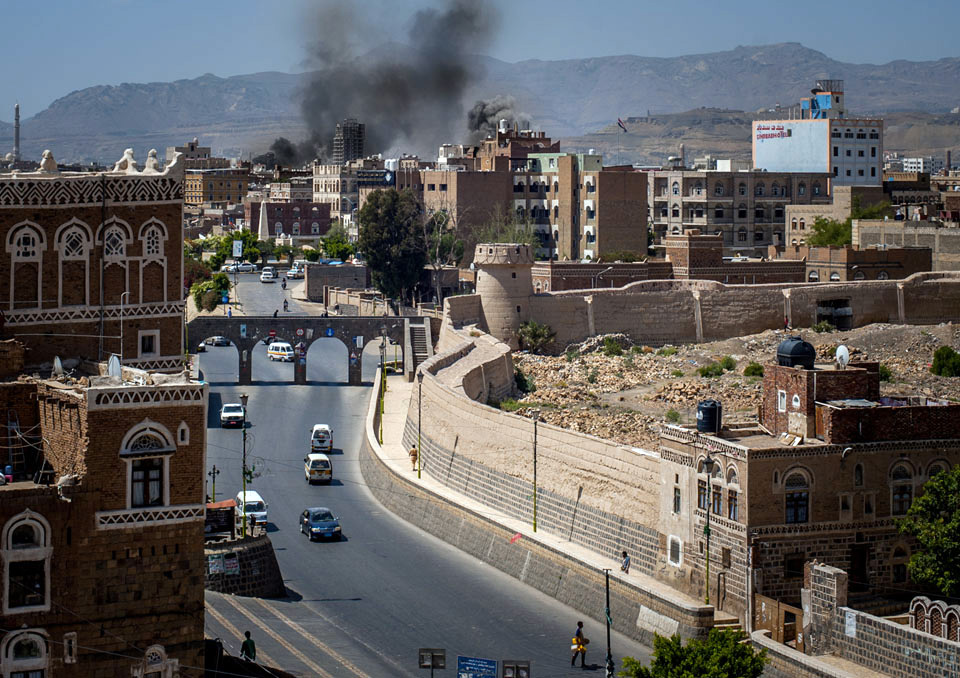