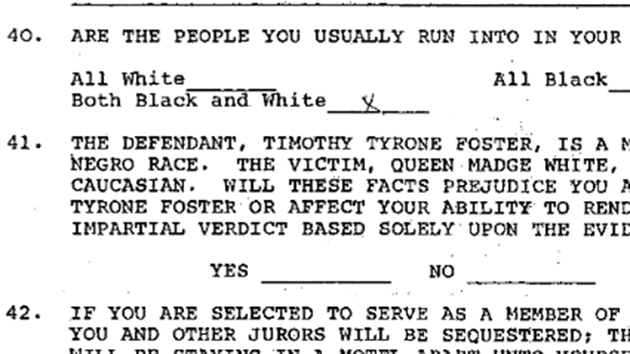 Until I contacted her in Rome, Georgia, on Tuesday, Marilyn Garrett had no idea she had become a minor celebrity in legal circles. Nearly 30 years ago, she briefly served in the jury pool during the capital trial of Timothy Foster, a 19-year-old black man charged with murdering an elderly white woman. The prosecutors dismissed her, along with every other African American called to serve, leaving an all-white jury that convicted Foster and sentenced him to death. On Monday, unbeknownst to her, the 63-year-old played a starring role in US Supreme Court arguments over racial discrimination in jury selection.

The rejection has stuck with Garrett all these years in large part because she felt like the prosecutors treated her “like I was a criminal.” Their interrogation left her in tears, she told me, even though she was just there to do her civic duty. Now she’s gotten a little payback, courtesy of Justice Sonia Sotomayor, who channeled Garrett’s outrage in the chamber of the nation’s highest court.

Timothy Foster’s lawyers have long argued that the trial prosecutors illegally removed blacks from his jury pool, but the Georgia courts rejected every one of those arguments. The Supreme Court is now hearing the case thanks to a treasure trove of documents his lawyers discovered in 2006. A public records request unearthed prosecutors’ notes that make a mockery of a jury-selection process that was supposed to ensure racial fairness. (You can read about some of the sordid history here.)

The jurors’ ethnicity was highlighted on questionnaires, which even in 1987 referred to Foster as “a member of the Negro race.”

Court records show that Garrett was a model citizen who would probably make a good juror. She was a lifelong resident of Georgia’s Floyd County who’d attended the segregated local schools in the 1950s and ’60s. She held down two jobs, went to church every Sunday, and sang in the choir. And she told prosecutors she would be comfortable imposing the death penalty—a basic requirement for anyone serving on a capital jury.

There were initially 10 black prospective jurors in a pool of 95. After dismissals for health reasons and other legitimate causes, only five of them remained. The prosecutors did an extensive workup of the remaining black jurors, ranking them by desirability should they be forced to seat one. The jurors’ ethnicity was highlighted on questionnaires, which even in 1987 referred to Foster as “a member of the Negro race.”

The prosecution’s notes included a draft affidavit from one of their investigators, stating that if it “comes down to having to pick one of the black jurors, Garrett, might be okay.” Even so, Garrett and the others were placed on a list slugged “Definite NOs.” The prosecutors then used their peremptory strikes—challenges they are not required to explain during jury selection—to remove all of them.

After the jury was seated, Foster’s lawyers challenged the removals, invoking the then-fresh Supreme Court ruling in Batson v Kentucky, an 1986 case in which the court ruled that it was unconstitutional to exclude jurors based on race. Defense lawyer Bright told the high court that the prosecutors had created bogus “race neutral” excuses, some after the fact, to justify their exclusion of Garrett. They claimed, for instance, that she was close in age to Foster. (He was 19, she was 34.) They also noted that she was divorced—even though divorced whites were allowed to serve—and that she showed “complete disrespect for the court.”

“I looked at her, and she would not look at the court during the voir dire, kept looking at the ground,” prosecutor Stephen Lanier said at one hearing. “Her answers were very short, if the court will recall…Said “yeah” to the court on four occasions. Shows a complete disrespect for the court and its authority. She appeared very shaky, very nervous. Her voice quivered. Not a very strong juror.” Later, in an argument that could be fairly described as Orwellian, Lanier contended that he struck Garrett from the jury because she had never asked to be removed from it.

“They really got me in a defensive mode, and then they said I was indignant. They had me in tears.”

Almost 30 years later, Garrett still remembers the day clearly. If she seemed defiant to the prosecutors, she told me, it might have been because “they really were nasty to me.”

The Foster case was her first experience being questioned on a courtroom stand, Garrett recalls. She had arrived at the courthouse at 9 am after finishing her night shift at a textile factory two hours earlier. It was one of the two jobs she worked to support a pair of kids on her own. (“I was sleepy.”) She also worked as a teacher’s aide in a Head Start program. In the subsequent appeals, prosecutors repeatedly referred to her as a “social worker”—a class of professionals they said they didn’t want on the jury.

“They just kept asking me over and over why I had two jobs,” Garrett recalls. “I was a single parent trying to take care of my children. It irritated me. They really got me in a defensive mode, and then they said I was indignant. They had me in tears when I went out of there. They attacked me with all that negative conversation. I’m a very sensitive person. It scared me. I didn’t expect to be treated like that. It was really humiliating.”

It certainly didn’t make her want to be on a jury again—not that she’s had much opportunity. Since the Foster trial, Garrett has only been called up for jury duty once, and she didn’t serve in that case, either. Her treatment in that Georgia courtroom shows the subtle means by which prosecutors have managed to keep African Americans off criminal juries in spite of the Supreme Court’s edict.

During Monday’s arguments, Justice Sonia Sotomayor was visibly upset over the way prosecutors had treated Garrett. She was especially piqued by their claims, long after the trial was over, that they’d bounced Garrett from the jury because her cousin had been arrested on a drug charge—an issue they never raised with Garrett during her questioning. “There’s an assumption that she has a relationship with this cousin,” Sotomayor demanded of Georgia’s lawyer. “I have cousins who I know have been arrested, but I have no idea where they’re in jail. I hardly—I don’t know them…Doesn’t that show pretext?”

Garrett told me that she did, in fact, have a relationship with her cousin. But “what did that have to do with Timothy Foster?” She was pleased when I told her that Sotomayor had come to her defense. “Thank her very much!” she said, laughing. “What she said was was true. They really did mistreat me, and I hadn’t done anything.”