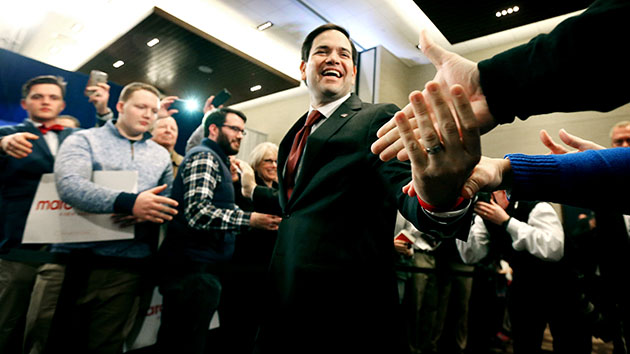 During the GOP presidential debate Thursday night, Florida Sen. Marco Rubio was asked to defend his position on Puerto Rico and his belief that the island shouldn’t be permitted to file for bankruptcy as it struggles with more than $72 billion in debts.

Telemundo’s María Celeste Arraras, who is Puerto Rican, asked the question, framing it as an electoral problem in his home state of Florida, where as many as 1 million Puerto Ricans live. And even though Puerto Ricans in Florida are a solid Democratic voting group, Rubio, the son of Cuban immigrants, will need every vote he can get in the March 15 primary.

“You say that it is only a last-resort measure, but the government of Puerto Rico has said that bankruptcy is its last resort,” she said. “How do you explain this very strong stance to the hundreds of thousands of Puerto Ricans that vote across the US, and particularly in your state of Florida?”

Rubio said bankruptcy wouldn’t fix the underlying issues driving Puerto Rico’s debt problems, and that “it’s too expensive to do business there, the tax rate is too high, the government regulations are too extensive.” He said that was the primary reason for the flight of working professionals moving from the island to places like Florida, New York, and elsewhere on the mainland. Any bankruptcy protection for Puerto Rico must come later, he said, after bigger budget cuts—”but not as the first resort…because it will not solve the problems on the island.”

Economic experts agree there are a variety of reasons the island amassed such unwieldy debts over the years, including government mismanagement, waste, and bloat. But Rubio omitted key context and a couple of pertinent facts from his answer.

First, despite the Puerto Rican government’s slow response, it has taken major steps to address its budget issues. Puerto Rico’s government has already raised sales taxes to the highest in the nation, raised gasoline taxes, cut tens of thousands of public jobs, and cut hundreds of millions of dollars from education spending.

Second, as pointed out by Latino USA‘s Julio Ricardo Varela, the debt crisis has been growing for decades under politicians of all political stripes, and Wall Street has profited all along the way. Since 2000, Wall Street banks and hedge funds have made more than $900 million managing various bond sales, according to Bloomberg News. Several of the same hedge fund executives who stand to benefit if the island is barred from restructuring its debt through bankruptcy have donated to Rubio’s campaign.

“The GOP are touting Marco Rubio, a Latino candidate for president of the U.S., as ‘proof of the American dream,'” wrote Nelson Denis, a former New York State assemblyman. “But Rubio’s attitude toward millions of Puerto Ricans is actually a nightmare…In 2016 and beyond, that is a lot of voters…and they will not forget Rubio’s political calculus.”