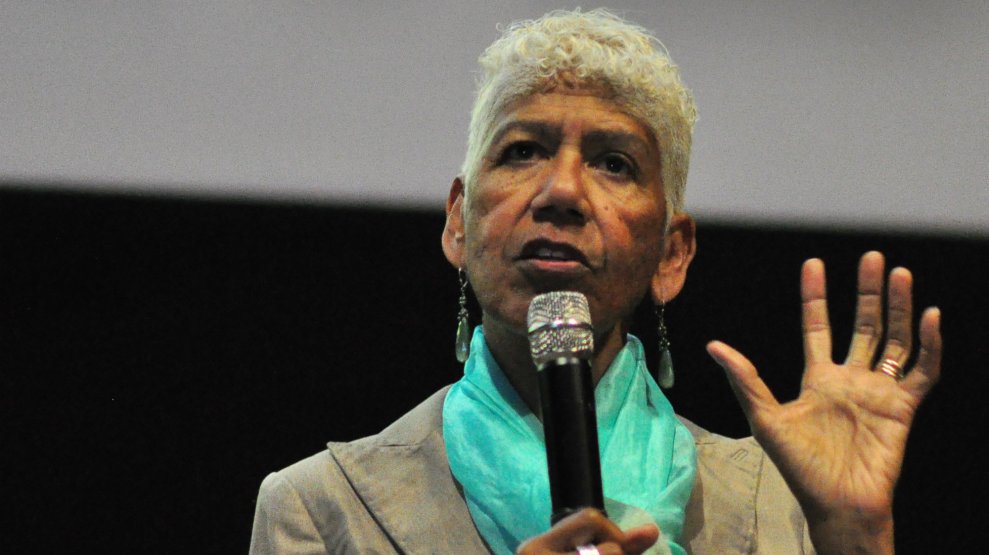 If the group were still around, this Saturday, October 15, would mark the Black Panther Party’s 50th birthday. The historical influence of the Panthers, perhaps best known for their early militant posture toward police violence, has been apparent recently in pop culture. In February, Beyonce rolled out a Panther-themed performance at that most all-American of events, the Super Bowl halftime show. A week later, the documentary Black Panthers: Vanguard of a Revolution introduced the group to a new generation of Americans. But the Panthers’ active legacy is undeniable, too. Many leaders from the Black Lives Matter movement cite the Panthers’ influence on the work they do around police violence.

Ericka Huggins, who founded the Panther’s New Haven, Connecticut chapter, and later stood trial alongside Panther chairman Bobby Seale for their alleged roles in the killing of a New Haven member suspected of working with the FBI. Both were acquitted, though Huggins spent two years in prison before the case went to trial. I asked Huggins—who at 66 years old remains a social justice activist—to reflect on the Panthers’ legacy.

Mother Jones: How would you say today’s Black Lives Matter movement draws on the Panthers’ influence?

Ericka Huggins: Everything draws on the things that came before. The Black Panther Party drew on the civil rights movement. All of the organizations in the ’60s and ’70s and ’80s—the Young Lords, the Brown Berets, the Black Berets, the American Indian Movement, the Gay Liberation Front, the anti-war movement—drew on movements before them. In particular, the courage of the women in these movements is a legacy that the Movement for Black Lives draws on. I stand on their shoulders, and Alicia Garza, and Patrisse Cullors, and Opal Tometi [the founders of the Black Lives Matter national network and creators of the hashtag], stand on theirs as well. The term Black Lives Matter is new. But there isn’t anything new about what is being requested of black people, of people of color, of white people. There is work that all of us must do, and because of social media we are more aware of it. That is the impact of Black Lives Matter. I’m particularly inspired that the people leading the movement are women—LGBT women.

MJ: Would you say today’s movement is more progressive on that measure than the Black Panther Party used to be?

EH: That’s a loaded question. I don’t know that I could say the Black Panther Party is more progressive, for instance, than Fredrick Douglass. Or that Martin Luther King was more progressive than Malcolm X. Or that Malcolm X is more progressive than Marcus Garvey. A movement brings together all kinds of peoples with differing perspectives, but the same goal. If you compare the Ten Point Program of the Black Panther Party to the platform of the Movement for Black Lives, you’ll see similar language. It isn’t that anybody copied the language. Anyone who has an open heart can see the violence of, for instance, the police today, the so-called correctional system today. Anyone with compassion will come to the same conclusion—that it has to stop. And the it that has to stop is racialized thinking, racist behavior, violent means to control people. Our response to that violence is sourced in love. So I don’t know about more progressive—everything has its purpose in its time.

“I don’t have a political stance [on police violence]. Because the word ‘politics’—when you look it up—means something that is debatable. And there’s nothing to debate.”

MJ: What does activism look like for you personally these days?

EH: Now that I’m not teaching anymore, I travel around the country and share. One of the organizations I work with—world-trust.org—sends me out to foster conversations about systemic inequities—particularly racial inequities—in places where people never talk about race, and never think of a human being in terms of their coinciding identities. A man or woman can be black and queer and immigrant and differently abled, and poor—all in one body. And I go to elementary schools, middle schools, high school, colleges, community organizations. I also align myself with organizations that serve families or women and children. I go into the juvenile institutions and share whatever it is they’ve asked me to come and share—including my practice of meditation, which helped me to deal with the endless trajectory of time when I was incarcerated. I didn’t stop living when the Black Panther Party ended in 1982.

MJ: The Philando Castile shooting was unsettling for many people because Castile appeared to have followed all the officer’s orders. There was also Tamir Rice and John Crawford, both killed while carrying toy guns. And more recently Korryn Gaines was killed in an armed standoff with Baltimore County police. I’m curious where you think we stand today in terms of black people’s relationship with guns?

EH: I was raised in DC and my mother was raised in the South. People protecting themselves against police violence—against Klan violence—against white council violence, was very common. Even clergy went to church with guns. Everyone has a right to defend themselves. What I hope this country will eventually do is not allow guns to be in the hands of persons who should not have them. But I don’t feel that there’s anything wrong with a person defending themselves against an attack.

How do I feel about police violence? My heart is broken by it. I don’t have a political stance, because the word “politics”—when you look it up—means something that is debatable. And there’s nothing to debate. I met Tamir Rice’s mother and about 20 mothers who gathered in Oakland to share their stories. They cited being inspired by others who’ve come before them about how to reduce the unbearable pain of losing their sons or daughters. It never goes away. I think that police re-training and education is paramount. We want to abolish punitive law enforcement just like we want to abolish prisons. But there are people in prisons that we need to think about. And there are police officers on the street that we need to think about.

MJ: What’s your view on Colin Kaepernick’s silent protests during the national anthem?

EH: Celebrities are human beings. His eyes are open. He can hear. He’s paying attention to what he’s listening to. His heart is open. He’s tired of it—why wouldn’t he be? So he spoke. He’s not so worried about his paycheck or what people think. There’s something larger at stake. He’s a part of a multibillion-dollar industry and he’s breaking with the promise not to talk. That is what’s so beneficial about him. I cheer him on. When I was in DC at the new African American History and Culture Museum, the most celebrated statute in the museum on one floor was a statue of John Carlos and Tommie Smith who put their fists up at the Olympics in the ’60s. People were taking pictures with it. Kaepernick’s stance is empowering young black people today and it begs a look at history. He’s not the first, and he knows he’s not the first.