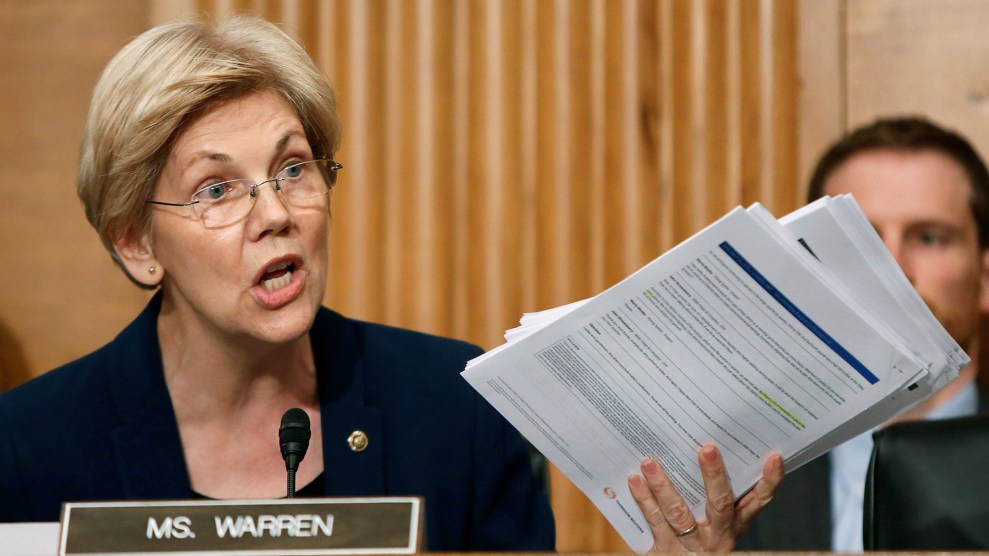 Sen. Elizabeth Warren demanded Friday that President Barack Obama demote his top financial regulator, Securities and Exchange Commission Chairwoman Mary Jo White, who’s held the position since 2013. The Massachusetts Democrat raised numerous objections in a letter to White’s tenure atop the SEC, narrowing in on White’s resistance to writing regulations that would compel corporations to reveal their political spending habits. By refusing to rein in how corporations can spend money, Warren argued, White has allowed dark money to explode under her watch.

“I do not make this request lightly,” Warren’s letter concluded. “I have tried both publicly and privately to persuade Chair White to direct the agency’s resources toward pressing matters of compelling interest to investors and the public, and toward completing those rules that Congress has required it to implement. But after years of fruitless efforts, it is clear that Chair White is set on her course. The only way to return the SEC to its intended purpose is to change its leadership.”

Obama cannot fire White outright from the SEC. But the president does have the authority to replace her as chair with one of the agency’s other commissioners. White would still be a commissioner and be able to vote on final rulemakings, but she wouldn’t have the same authority to direct the SEC’s spending priorities in deciding which rules to formulate.

“I do not make this request lightly…But after years of fruitless efforts, it is clear that Chair White is set on her course,” Warren wrote.

Warren recognizes that it would be “an uncommon act” for Obama to remove White as chair, but she thinks it is imperative that Obama act, given “White’s extraordinary, ongoing efforts to undermine the agency’s central mission.”

White was confirmed as head of the SEC in 2013 by unanimous consent, but the liberal wing of the Democratic Party has never been enamored with her. A former US attorney, White had worked as a defense attorney representing financial institutions prior to joining the government. When her nomination came before the Senate, she reassured Democrats that her stint defending banks wouldn’t influence her work as a regulator. But since taking the reins at the SEC, White has refused to have the agency work on a rule that progressives have pined for since the Supreme Court’s 2010 Citizens United decision made it possible for corporations to spend unfettered sums on politics.

Before Mary Schapiro, White’s predecessor, left office, she said the agency would soon be proposing a disclosure rule that would force public companies to reveal all the money they devote to political activities. But as soon as White took control of the SEC, that effort to shine light on dark money came to a halt. White removed disclosure from the list of rules on the agency’s agenda, and it hasn’t come back since.

“For years, the Chair of the SEC, Mary Jo White, has refused to develop a political spending disclosure rule despite her clear authority to do so, and despite unprecedented and overwhelming investor and public support for such a rule,” Warren wrote in her letter to Obama. “This brazen conduct is merely the most recent and prominent example of Chair White undermining your Administration’s priorities and ignoring the SEC’s core mission of investor protection.” Instead of furthering disclosure of corporate activities, White has actively worked under the “curious presumption that public companies currently disclose too much information,” Warren said.

As soon as White took control of the SEC, the effort to shine light on dark money came to a halt.

In addition to her objections over the dark money disclosure rule, Warren singled out the SEC’s failure to put into effect rules required under the 2010 Dodd-Frank law intended to clean up Wall Street following the recession. The SEC has yet to finalize 19 mandatory rules from the law. White “appears to view these congressional mandates as mere suggestions that the agency is free to ignore,” Warren says. “And she has gone further—publicly denigrating some of these requirements as superfluous and misguided.”

Warren has long objected to White’s administration of the SEC. She’s penned numerous letters requesting action from White, and at a June congressional hearing, she told White, “A year ago I called your leadership at the SEC extremely disappointing. Today I am more disappointed than ever.” Apparently the sentiment was shared; White replied, “I’m disappointed in your disappointment.”

Warren opened her letter by noting that the recent government funding bill passed by Congress included a Republican-backed measure restricting the SEC from putting out a final disclosure rule and warned that, with White’s disinterest in the rule, the same measure is likely to be there when Congress must next pass a spending bill in December. Beyond that, there isn’t much to explain the timing of the letter. Maybe it was part of an effort to signal to the next administration that Warren won’t sit back on presidential nominees that she finds troublesome. As recent emails from WikiLeaks indicated, when Warren’s staff first met with Hillary Clinton’s staff last year, the main concern from the Warren wing was whom Clinton might appoint as financial regulators.