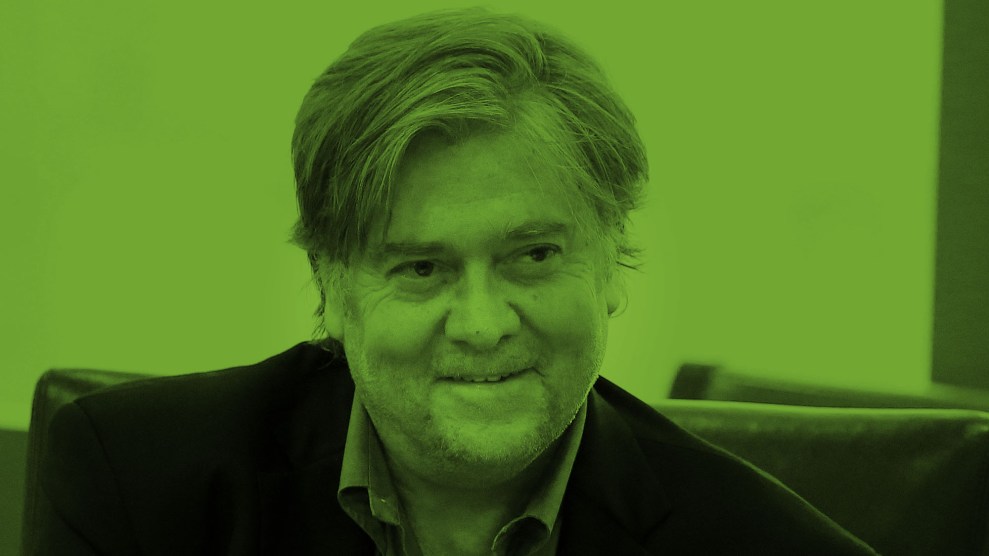 Donald Trump’s demagogic presidential campaign gave white nationalists and other extremists an opportunity to inject racism, misogyny, and xenophobia into mainstream American politics. What was once obscure rhetoric and hate speech festering in the backwaters of the internet has since bloomed into a loose-knit extremist movement with the prospect of unprecedented influence in the White House. Here’s how it happened. (Also read our full investigation into the extremist movement seeking to capitalize on Trump’s victory.)

2007
Right-wing firebrand Andrew Breitbart creates Breitbart News as an antidote to “liberal bias” in media. “My entire business model is to go on offense,” he tells Slate. “They don’t like our aggressiveness. They want to portray me as crazy, unhinged, unbalanced. OK, good, fine. Fuck you. Fuck you. Fuck you.”
2008
White nationalist Richard Spencer coins the term “alt-right,” initially to describe anti-establishment right-wingers skeptical of Bush-era Republicans. In 2010, Spencer launches AlternativeRight.com, a hub for “racialist” ideas and promoting America as a white ethno-state.
2011
4chan, an online forum created to discuss anime, launches the message board “/pol/” (short for “politically incorrect”), which soon becomes a cesspool of racist memes such as the “Happy Merchant,” a cartoon depicting a scheming Jew.
2012
Andrew Breitbart dies of heart failure. Stephen Bannon takes over Breitbart News, building it into “the platform for the alt-right.”
2014
Gamergate trolls target female video game developers and journalists, creating a model for the social-media mobs of the alt-right.
April 2015
The New York Times and the Washington Post each partner with author Peter Schweizer, Breitbart‘s senior editor-at-large, for reporting based on his controversial investigative book Clinton Cash. During the 2016 election, Breitbart News offers a “free global broadcast” of the film adaptation—written and produced by Bannon.
June 2015
Donald Trump announces his candidacy for president, electrifying white nationalists with his disparagement of Mexican criminals and “rapists.” Trump soon garners endorsements from nearly two dozen neo-Nazi, KKK, and other extremist leaders.
July 2015
Online trolls attack Jeb Bush, John McCain, and Marco Rubio as “cuckservatives” during the GOP primary.
October 2015
Trump tweets an image of himself as Pepe the Frog, a symbol of the alt-right.
November 2015
Trump retweets a graphic displaying wildly inaccurate claims about black people and homicide. It was previously disseminated by an account with a modified swastika as its avatar.
December 2015
After the massacre in San Bernardino, California, Trump calls for a “total and complete shutdown” of Muslims entering America until US leaders can “figure out what is going on.”
January 2016
Trump retweets @WhiteGenocideTM, an account displaying a photo of the founder of the American Nazi Party. The founder of the neo-Nazi Daily Stormer writes that Trump “has gone full-wink-wink-wink to his most aggressive supporters.”
February 2016
Former Grand Wizard of the KKK David Duke endorses Trump. When confronted about it on CNN, Trump responds, “I don’t know anything about David Duke, okay?” Trump (who’d called Duke “racist” in the past) later blames his denial on a faulty earpiece before conceding that Duke is “a bad person.”
March 2016
Milo Yiannopoulos and a fellow Breitbart writer publish a lengthy “Establishment Conservative’s Guide to the Alt-Right,” denying the movement’s leaders are racist and calling them “dangerously bright.”
May 2016
The Trump campaign selects William Johnson, a white nationalist leader, as a California delegate to the GOP national convention. After Mother Jones breaks the story, the campaign blames a “database error” and Johnson resigns; he later funds pro-Trump radio ads and robocalls.
June 2016
The Anti-Defamation League adds the triple parentheses “(((echo)))” symbol to its list of hate symbols after trolls target Jewish journalists with it on Twitter. Trump retweets an image, drawn from a fringe message board, of Hillary Clinton in front of a pile of cash and a Star of David. Trump insists the star is a sheriff’s badge.
July 2016
At the Republican National Convention, Yiannopoulos co-hosts a party attended by anti-Muslim extremist Pamela Geller and Dutch far-right politician Geert Wilders. David Duke announces his candidacy for US Senate in Louisiana, echoing Trump’s message of “America First.”
August 2016
Trump hires Bannon as his campaign CEO. Clinton delivers a campaign speech calling the alt-right an “emerging racist ideology“; a month later she faces a backlash after saying that half of Trump’s supporters belong in a “basket of deplorables.”
September 2016
“Racialist” leaders, led by Richard Spencer, hold a press conference characterized as a “coming-out party” for the movement. Yiannopoulos ramps up a tour of college campuses. The Anti-Defamation League lists cartoon character Pepe the Frog as a hate symbol.
November 2016
Spencer says the alt-right is “the vanguard of Trumpian populism” and will be a “critical force” pushing Trump “in the right direction.” Trump names Bannon as his White House chief strategist.