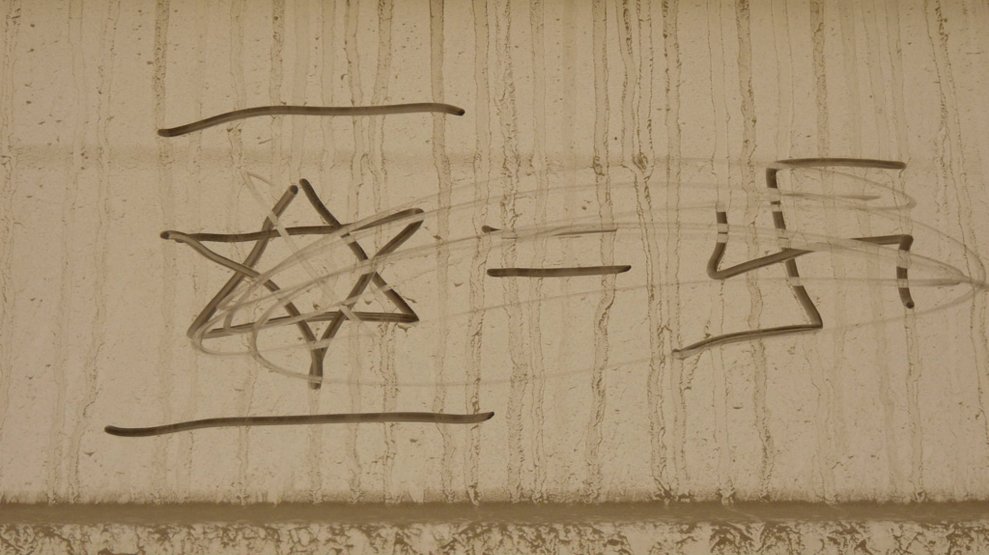 Anti-Semitic grafitti spray painted on the side of a building.Zeevveez/Flickr

Last week, the FBI announced there were 5,850 hate crimes in 2015—a 7 percent increase over the year before. But that total, which is based on voluntary reports of hate crimes from local and state police departments, is likely far lower than the real number. The Bureau of Justice Statistics estimated about 260,000 hate crimes annually in a 2013 report looking at hate crimes between 2007 and 2011. The BJS’s estimate was based on anonymous responses to the National Crime Victimization Survey, which the bureau conducts every year.

But most of those crimes are never heard by a jury. Federal prosecutors pressed forward with just 13 percent of hate crime cases referred to them between January 2010 and August 2015, according to an analysis of DOJ data by the Transactional Records Access Clearinghouse (TRAC) at Syracuse University, and only 11 percent of those referrals ended in conviction. Data on hate crime prosecutions at the state level are scarce, but, in its 2013 study, the Bureau of Justice Statistics found that only 4 percent of these crimes even result in an arrest.

Given the apparent extent of the problem, why do so few hate crimes end up in court?

One reason is that these crimes never get reported to law enforcement. Approximately one-third of those that do, according to the FBI, are crimes such as vandalism or destruction of property that don’t involve physical contact between the alleged offender and the victim. “These people burn crosses and run away, so you don’t know who did it,” says Michael Lieberman, who serves as legal counsel to the Washington, DC, branch of the Anti-Defamation League (ADL), a civil rights organization that fights anti-Semitism. In fact, he notes, the FBI’s 2015 data reflects several hundred fewer known hate crime offenders than actual incidents because officials often don’t know who committed the crime. Even the 5,500 offenders counted as “known” by the FBI have not necessarily been identified by law enforcement officials. (The FBI counts offenders as “known” when it has a piece of information, such as race or gender, that can help them eventually identify the perpetrator.)

“These people burn crosses and run away, so you don’t know who did it.”

Then there is a problem of material evidence. Many hate crimes are committed with what are known as “weapons of opportunity”—bricks and bottles, for instance, or baseball bats, says Jack Levin, a hate crimes expert at Northeastern University in Boston. So even when the victim and offender actually cross paths and violence ensues, there’s often no evidence linking the suspect to the attack. If an offender had used a gun, its shell casing could be traced.

But a more fundamental dynamic often short-circuits hate crime prosecutions. The perpetrator of a crime must be motivated by bias and that’s difficult to prove. Bias is usually established by the use of a slur or epithet during the encounter, or offensive graffiti left at the scene, Levin notes. In other instances, the suspect might leave hate propaganda at the scene or investigators might find it in their car or home or on their computer or social media presence. Membership in a hate group is also solid evidence of bias. “Without that information, it becomes very difficult to prosecute the offender,” he says.

Federal prosecutors rejected nearly 90 percent of hate crime cases recommended to them for prosecution in the more than five years covered by TRAC’s analysis, and more than half were rejected because of insufficient evidence. Some police departments in cities such as Boston, New York City, and Phoenix have designated units that investigate hate crimes around the clock. But many smaller departments throughout the country lack the resources for that kind of specialization, Lieberman from the ADL says.

Even with some evidence, prosecutors are often reluctant to file hate crime charges, as was the case early last year in North Carolina. Prosecutors filed murder charges against Craig Hicks—who allegedly killed three members of a Muslim family by shooting them each in the head in their Chapel Hill apartment in February, 2015. Hicks’ attorney maintained that the shooting was motivated by a parking dispute between Hicks and his neighbors. But the victims’ relatives have said they believe Hicks killed them because they were Muslim.

Prosecutors did not include hate crime charges against Hicks, says Brian Levin, director of the Center for the Study of Hate and Extremism at California State University in San Bernadino, because they probably felt there was not enough evidence to prove he was biased against Muslims.

“[Hicks’ Facebook page] really didn’t have a lot of anti-Muslim stuff on it. It was more anti-religion in general, and anti-Christian,” Brian Levin says. Hicks had regularly harassed the victims, and the father of two of them said one of his daughters had told him she believed it was because they were Muslim. But that might not be enough to convince a jury in the absence of direct evidence of bias from Hicks himself, Brian Levin said. While Levin’s center considers the shooting a potential hate crime, it did not include it in its data because law enforcement officials have not declared it one. Jack Levin from Northeastern University agrees: A parking dispute may have catalyzed the shooting, but “it’s hard to believe that these three Muslim students were not targeted because of their religious identity.”

On the other hand, Dylann Roof, the 21-year-old white man who, in June 2015, killed nine black parishioners in a storied Charleston, South Carolina, church, “left a lot of evidence that he was a white supremacist,” Brian Levin says. Roof posted photos online that showed him posing with the Confederate flag and wearing a jacket embellished with a symbol of South African apartheid. He referred to black people using the N-word in his manifesto. And survivors of the shooting said that before he opened fire, Roof announced that he was there to “shoot black people,” according to law enforcement officials. The US Department of Justice has filed federal hate crime charges against Roof, but South Carolina is one of five states that doesn’t have a hate crime statute. State prosecutors brought murder charges against Roof.

Many incidents that are recorded as hate crimes by police are not ultimately prosecuted that way, Brian Levin says. Prosecuting hate crime charges sends a symbolic message, but the charges are added to another offense, and prosecutors sometimes have to make a careful calculation as to whether they are worth bringing up at all. “There may be instances where a prosecutor—using their discretion—may determine that the additional elements of a hate crime will be too difficult to prove and [might] risk confusing the jury, and possibly risk the whole case,” he says. Similarly, in situations where the punishment for the base offense is already severe—as with murder—a prosecutor might decide not to pursue additional charges when a conviction would have little to no impact on the final sentence. That could also explain why North Carolina prosecutors did not pursue hate crime charges against Hicks, who will likely already be convicted of a triple murder, Brian Levin says.

In the absence of state hate crime charges, only particularly heinous crimes—like Roof’s massacre—can be prosecuted federally under the Matthew Shepard and James Byrd, Jr., Hate Crime Prevention Act, passed by Congress in 2009. Federal officials are also investigating Hicks’ shooting as a hate crime but have yet to make a decision about charges.

“I think it remains a legitimate question as to how vigorous Mr. Sessions will be in prosecuting a statute that he was one of the chief opponents of.”

Brian Levin is concerned that federal enforcement of the hate crimes act could weaken during a Trump administration, with his nomination of Sen. Jeff Sessions (R-Ala.) for attorney general. “I think it remains a legitimate question as to how vigorous Mr. Sessions will be in prosecuting a statute that he was one of the chief opponents of,” Levin says.

Sessions’ nomination has already been contested by civil rights groups because of a series of racist comments he reportedly made early in his career. He was also a strong opponent of the federal hate crimes act. The law extended hate crime protections to members of the LGBT community and expanded the DOJ’s ability to direct federal resources to assist local and state police departments with hate crime investigations in their jurisdictions. It also mandated that the attorney general—or a designee—approve all criminal prosecutions brought under the act.

In 2015, there was a 7 percent increase in hate crimes nationwide and a sharp, 67 percent increase in crimes against Muslims. The Southern Poverty Law Center tallied more than 700 incidents of intimidation and harassment in the week after the election, many of them in schools, and at least two recent killings of black men—one outside of Richmond, California and another in Charleston, West Virginia—are being investigated as hate crimes. Law enforcement officials in several cities have vowed to crack down on hate crimes in their jurisdictions.

Jack Levin explained why it’s important to prosecute hate crimes with the full force of the law in an interview with Mother Jones: “The perpetrator is sending a message when he commits the hate crime,” Levin said, noting that hate crimes send ripples throughout the targeted community. “We need to send the message back that we as a society will not tolerate this kind of intolerance. That we do not encourage and support the perpetrator. That we are not hate-filled people.”