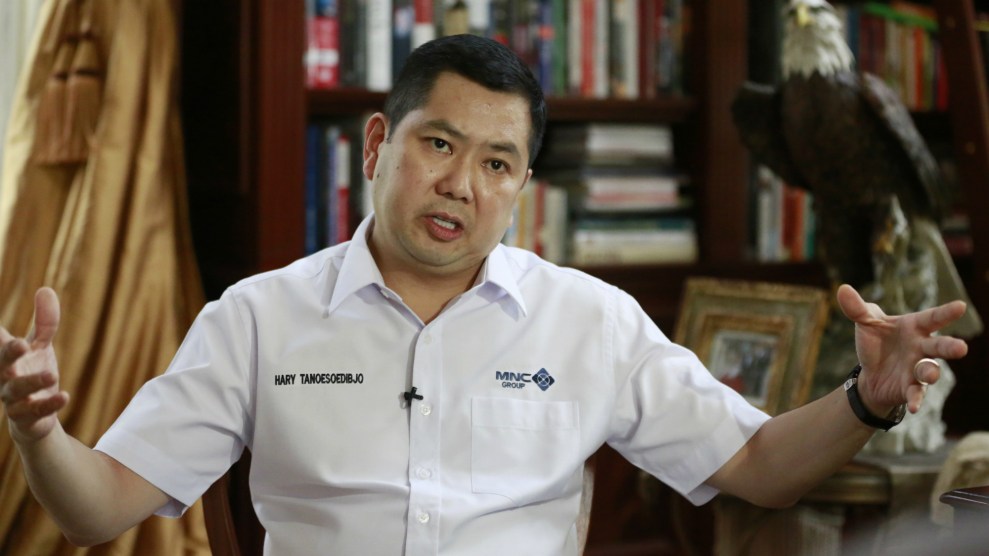 Donald Trump’s Indonesian business partner is touting his relationship with the president, telling a Jakarta-based magazine that he still has ready access to the man in the Oval Office.

In a recent interview with Indonesian weekly Tempo titled “I Have Access to President Trump,” Hary Tanoesoedibjo, a billionaire who inked deals with the Trump Organization to build luxury resorts on the islands of Bali and Lido, said he has instant access to Trump’s children and through them can reach Trump whenever he wants. Before assuming office, Trump declined to divest from any of his businesses but said he would no longer have any involvement with the day-to-day operations of the Trump Organization, which is now being run by his sons, Donald Jr. and Eric. Trump also said his company would not initiate any new foreign deals, although it would continue to develop projects that were already in progress, including the two resorts he is building with Tanoesoedibjo that are barely underway.

In the Tempo interview, which appears in the Indonesian magazine’s print edition with a short excerpt online, Tanoesoedibjo shed little new light on the resort projects, declining to provide details on how the projects will be financed (“third parties, i.e. banks and financial institutions, personal capital and those of partners”) or how much Trump is being paid for his involvement. According to Trump’s latest personal financial disclosure form, last year he was paid between $2 million and $10 million for his role in the Indonesian projects.

Even though Trump is no longer involved in the daily management of their joint venture, Tanoesoedibjo told the magazine that his existing relationship with Trump means he can help put people in touch with the American president. He noted that he set up a 2015 meeting between Trump and two Indonesian politicians, which Trump turned into a campaign stunt. One of the politicians was later caught on tape in what was allegedly an effort to solicit a $4 billion payout from an American mining company seeking to do business in Indonesia.

“I’m just a small fry, but if other people have difficulty getting to him, I can do it easily,” Tanoesoedibjo said in a portion of the interview only available in the magazine’s print version. “I communicate with his children over our businesses. I can meet with his kids anytime. I just need to pick up the phone. My WhatsApp messages are also responded.”

Mother Jones contacted Tanoesoedibjo directly to confirm the accuracy of this quote and other comments that appeared in the story.

“This is absolutely not true,” Tanoesoedibjo replied in an email, but then proceeded to confirm the essence of the quote from the magazine. “I just communicate with Donald Trump Junior, Eric Trump and the management team over our business, nothing’s [sic] else. It’s a professional relationship since we are in partnership. We can communicate face to face or through email or sms or phone call, depending on the need.”

Tanoesoedibjo and his wife attended Trump’s inauguration in January, documenting the VIP treatment they received on Instagram.

One of the journalists for Tempo who conducted the interview with Tanoesoedibjo said the magazine stands by the quote and has a recording and transcript to back it up. Tanoesoedibjo made similar comments about his ability to facilitate access to Trump in an interview with Reuters.

Tanoesoedibjo has political ambitions of his own in Indonesia, where he founded his own political party. In prior interviews, Tanoesoedibjo has said he was inspired by Trump’s ability to transition from a wealthy businessman to a political leader. He is currently mulling a presidential bid in his home country.

Tanoesoedibjo and his wife, Liliana, attended Trump’s inauguration in January, documenting the VIP treatment they received on Instagram—including a chauffeured ride down the Pennsylvania Avenue inaugural parade route, past waiting crowds and police officers standing at attention. Other Instagram posts showed the couple at exclusive parties before and after the ceremony and posing with members of Trump’s family. In the Tempo interview, Tanoesoedibjo said he and his wife attended the inauguration as guests of the Trump Organization and paid their own way.

“I don’t count, but often enough,” he told Tempo.

Asked about what he and Trump had spoken about in early January, Tanoesoedibjo refused to comment.

“I cannot say,” he told the magazine. “It would not be ethical, especially now that he is the president.”

Tanoesoedibjo told Tempo that there was no conflict of interest in Trump being president of the United States and his business partner on luxury resorts in Indonesia.

“To be honest, Trump becoming president is a burden for me,” Tanoesoedibjo said. “I must make sure that all projects run well because [Tanoesoedibjo’s company] MNC carries Indonesia’s reputation.”