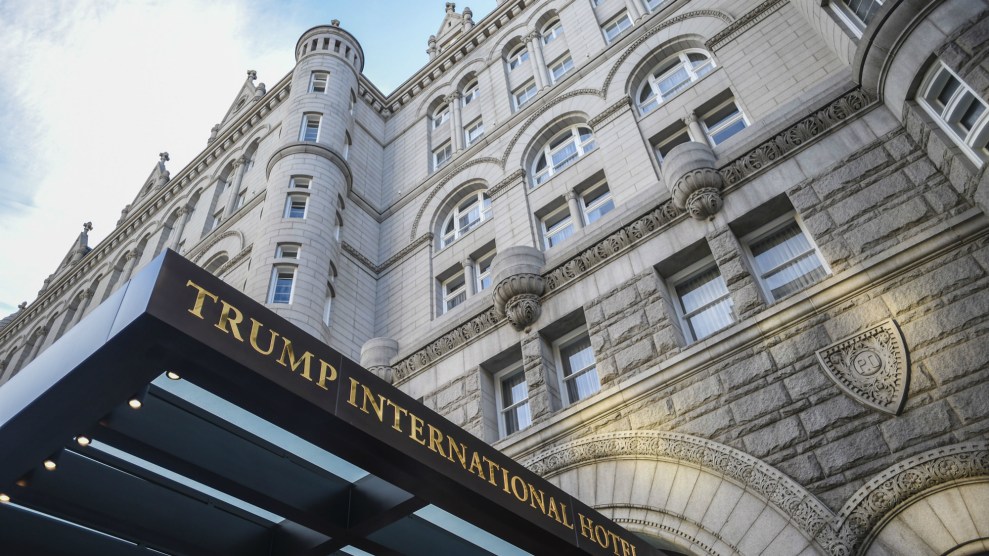 A top government official who negotiated a controversial deal to lease a historic Washington, DC, property to Donald Trump has announced that he sees no problem with the arrangement—despite a clause in Trump’s contract that prohibits any elected officials from benefiting from the deal.

Since before Trump’s inauguration, ethics experts and Trump critics have cried foul over the 60-year lease Trump signed with the General Services Administration in 2013 to take over the Old Post Office building on Pennsylvania Avenue. Long before he ran for president, Trump beat out a handful of large hotel chains to redevelop the property, which had long languished under poor management, costing taxpayers millions of dollars each year.

In late November, George Washington University law school professor Steve Schooner wrote in Government Executive magazine that the lease Trump signed includes a clause that prohibits any elected officials from benefiting from the deal. For months, the GSA has been silent on the question of whether Trump’s election causes a breach of the contract.

Today, Kevin Terry, a GSA contracting officer who oversaw the original contract negotiations with Trump, released a letter declaring that there was no reason for concern. In the letter, which is reprinted in its entirety below, Terry takes the position that there is no violation of the clause because the Trump Organization has been rearranged to steer any profits from the hotel away from Trump’s bank accounts while he’s in office. Trump owns more than 76 percent of the project; his children own the remainder.

According to Terry’s letter, the Trump Organization has presented documents to the GSA showing that although any profits (or losses) are accrued among the partners based on their ownership, any profits that would have gone to Trump himself will be kept separate and unavailable for Trump’s personal use until he is out of office. Under the terms of the original agreement, Trump could have withdrawn money with ease, but the new corporate structure (established before Trump’s inauguration) would prevent this, Terry wrote.

Schooner, who raised the original concerns, was scathing in his response to Terry’s letter. “Disgusting,” he wrote in an email to Mother Jones. He is bothered that Terry’s analysis does not take into account—or even acknowledge—the inherent conflict of interest in the decision.

“It is deeply troubling that the contracting officer’s letter makes no reference to the underlying conflicts of interest, which, of course, undercuts any suggestion that he (the contracting officer) engaged in independent analysis,” says Schooner, who teaches government contracting law. “The CO’s decision favors the President, who, in effect, is his supervisor, just as it favors the GSA (in terms of maintaining the status quo); but it also pleases his (the CO’s) ultimate supervisor – the head of the agency – who serves at the President’s pleasure.”

In December, congressional Democrats said they had been briefed by GSA officials who believed Trump would be in violation of the lease when he was inaugurated. Today, Reps. Elijah Cummings and Peter DeFazio, the top Democrats on the House Government Oversight and House Transportation and Infrastructure committees, respectively, condemned Terry’s decision, calling it is a reversal from what the GSA had previously told them.

According to Terry’s letter, while Trump is in office, his share of the hotel’s profits will be available for the hotel to use in its operations. The Democratic lawmakers said that was not an acceptable arrangement. “This decision allows profits to be reinvested back into the hotel so Donald Trump can reap the financial benefits when he leaves the White House,” Cummings and DeFazio said in a statement. “This is exactly what the lease provision was supposed to prevent.”

Terry’s letter is defensive and makes a dig at critics of the deal.

“To date, most of the review and reporting on [the clause] has focused on only a few select words, and reached simplistic ‘black and white’ conclusions regarding the meaning and implications of the clause,” Terry wrote. “However, it has been less widely reported that other legal professional and former government contracting officials have reviewed the language and come to different conclusions.”

But that’s apparently not the reasoning that Terry used in making his decision that there was no breach of contract. Instead, he relied on the belief that Trump would have to wait until he left office to receive any profits from the hotel.

Terry’s letter points out that the property was a money-loser for the federal government before the Trump lease, but that the Trump Organization has been paying $250,000 a month in rent since it signed the lease. According to Terry, Trump has paid $5.1 million so far.