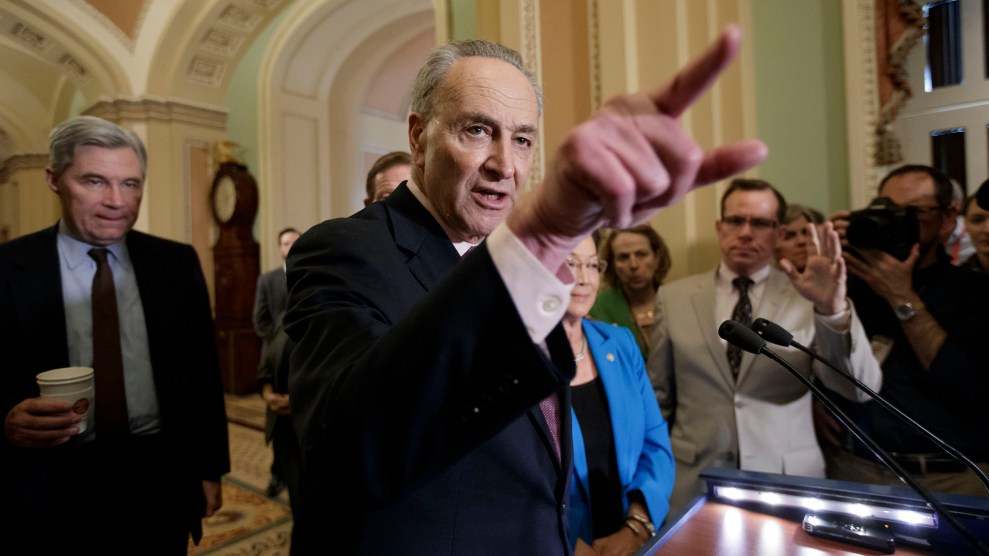 Speaking to a gathering of Democratic donors in late March, Sen. Claire McCaskill (D-Mo.) gamed out the perils of filibustering Neil Gorsuch, President Donald Trump’s nominee to the US Supreme Court, whose confirmation is scheduled for a Senate vote on Thursday afternoon. McCaskill imagined a scenario—one that is barreling toward becoming reality—in which Republicans remove the 60-vote threshold necessary to confirm nominees to the Supreme Court.

“They confirm either Gorsuch or they confirm the one after Gorsuch,” she explained, according to audio that was later leaked to the Kansas City Star “Then, God forbid, Ruth Bader Ginsburg dies, or [Anthony] Kennedy retires or [Stephen] Breyer has a stroke or is no longer able to serve. Then we’re not talking about Scalia for Scalia, which is what Gorsuch is, we’re talking about Scalia for somebody on the court who shares our values. And then all of a sudden the things I fought for with scars on my back to show for it in this state are in jeopardy.”

McCaskill’s warning echoes the case made by several academics in the past few days: It’s better to save the filibuster for another day when, perhaps, moderate Republicans would help Democrats keep the arcane Senate rule that makes it possible for a minority party to prevent a vote from occurring if it doesn’t get the support of 60 members of the chamber, effectively killing a bill or a Supreme Court nomination. But last Friday, McCaskill, a vulnerable Democrat up for reelection next year in a state Trump won by double digits, announced she would join her Democratic colleagues in filibustering Gorsuch. Her decision, to join every Senate Democrat but three to oppose Gorsuch and dare Republicans to end the filibuster, raises a puzzling question: Given the possibly terrifying likelihood that awaits progressives if they lose the filibuster—not just with Trump’s Supreme Court nominee this time, but also with future fights—what’s the upside?

Some fear there is none, and that the Democratic Party is rushing toward a decision it will likely regret, at the behest of the party’s progressive and increasingly powerful base. A filibuster “prevents a revolt by the base—it’s the base here that’s not being smart,” said a political consultant who asked not to be named because of a client list that includes Democratic senators. The small donor base and activist core of the party “have boxed these folks in to a position that is not the wisest one.”

“Voting against the filibuster is the same as voting for Gorsuch.”

The pressure began in early March, when progressive groups issued a warning to Senate Democrats for being what they saw as too soft on Gorsuch. “We need you to do better,” a coalition led by NARAL Pro-Choice America wrote in a letter. Indivisible, a new grassroots group that helps people organize locally and contact their representatives, drafted a script for activists to use when calling members of Congress. And the Progressive Campaign Change Committee has been vigilant in going after senators who were slow to get on the filibuster train. An email sent out to the group’s listserv in Vermont, for example, attacked Sen. Patrick Leahy (D-Vt.), a stalwart liberal, for saying he’s “not inclined to filibuster.” The email urged constituents to call Leahy and get him to commit to filibustering. “Voting against the filibuster is the same as voting for Gorsuch,” the email said.

Senate Minority Leader Chuck Schumer (D-N.Y.), who’s best known as a dealmaker rather than as a progressive stalwart, “is not really in a position to go to these people and say, ‘Hey, this isn’t really this important, this other one is,’ because that triggers the very response he’s trying to avoid,” the consultant explained. As with virtually every other Democrat, Schumer does not want to invite the anger of the base by stopping a filibuster. The decision to oppose Gorsuch, and to let Republicans put an end to the filibuster entirely, the consultant said, is more about survival today than long-term planning.

Tad Devine, who served as chief strategist on Bernie Sanders‘ insurgent presidential campaign, considers the base to be the major reason that Democrats should filibuster. To avoid it “would have been a signal that Democrats were willing to engage in business as usual and not willing to mount principled opposition to Trump” and his nominee, he explained.

Devine is looking forward to the midterm elections in 2018. In the past two midterm cycles, Democrats have struggled to turn out their voters and Republicans have won huge victories, taking over dozens of state capitals and governors’ mansions, even in blue states. If Democrats didn’t take up this fight, he said, they would demoralize their base and risk losing the momentum they have today. “We don’t want people who are now coming into the political process, engaging so strongly in support of the Democrats and their opposition to Trump, to be disheartened,” he said. “For Democrats not to do this would have been a potentially catastrophic mistake.”

Beyond the issue of the base, some progressives see more potential upsides in triggering the nuclear option. “This is an exercise of a raw political power grab, and the hope is that the American people see that for what it is in coming elections,” said Neil Sroka, communications director for Democracy for America, a progressive group that is supportive of Democrats’ current strategy of filibustering Gorsuch. This is a position echoed by Schumer himself. When asked at a press conference Tuesday what would happen if Republicans ended the filibuster for Supreme Court nominees, he responded, “They will lose if they do it.” That’s because the voters will see that McConnell “will do anything to get his way,” and Republicans will not be seen as acting in a reasonable or bipartisan fashion. In the long term, Sroka believes progressives will be better off without the filibuster hindering their own nominees when, perhaps after the 2020 elections, Democrats are in a position to pick the next nominee.