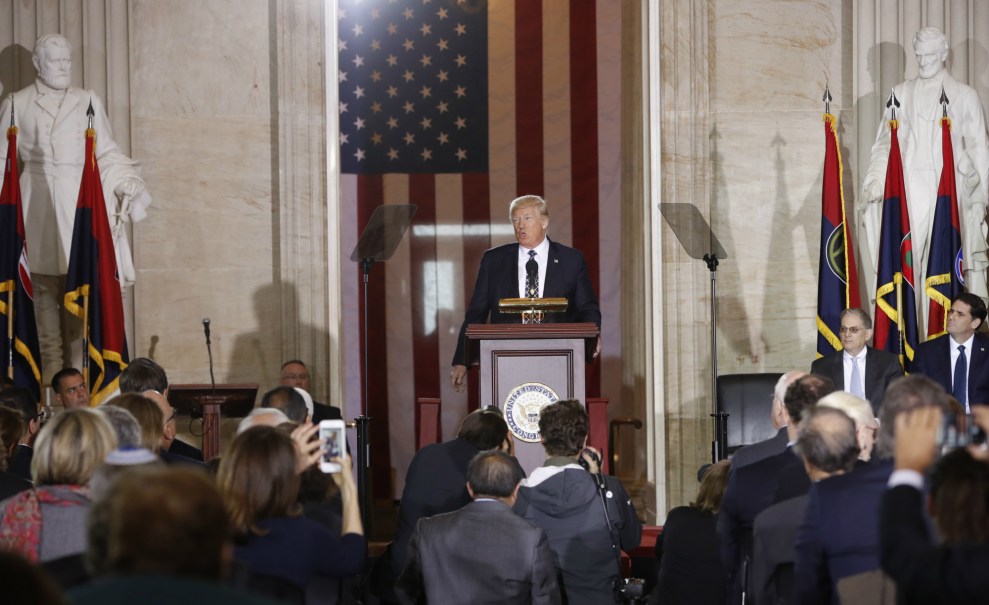 Since 1982, the US Holocaust Memorial Museum in Washington, DC has organized an annual remembrance ceremony in which Holocaust survivors, members of Congress, and community leaders gather to memorialize the millions of people murdered and persecuted during the Holocaust. For the last 24 years, the president has delivered the keynote address without controversy. But this year was different.

Before Trump took office, his campaign came under fire for overt and coded anti-Semitism and since becoming commander in chief, his administration has continued to face criticism for failing to mention Jews or anti-Semitism in its statement on International Holocaust Day and for not doing enough in response to anti-Semitic acts. There were calls to rescind Trump’s invitation and some on the museum’s board of trustees felt conflicted about whether to even attend.

“I’ve struggled with whether or not I should even go, or to stay away in protest,” board member Andrew J. Weinstein told the New York Times. He said he ultimately would attend despite his “deep concerns about the president and the people he’s surrounded himself with.”

But during the remembrance ceremony in the Capitol Rotunda, Trump called Holocaust deniers accomplices to the “horrible evil” and vowed to “confront anti-Semitism.” He then personally addressed the Holocaust survivors in attendance and explained its trauma to them at length.

“You witnessed evil, and what you saw is beyond description, beyond any description,” he said. “Many of you lost your entire family—everything and everyone you love, gone. You saw mothers and children led to mass slaughter.” Here’s the video of his remarks:

“You saw the starvation and the torture,” he went on. “You saw the organized attempt at the extermination of an entire people—and great people I must add. You survived the ghettos, the concentration camps and the death camps.”

Some Holocaust survivors have spoken out forcefully against Trump’s ban on immigrants from Muslim-majority countries, noting that the United States turned away Jews seeking refuge during the Holocaust. Others have noted similarities between Trump’s and Adolf Hitler’s nationalistic and xenophobic rhetoric as they rose to power. Some victims of the Japanese internment camps in the US have also issued similar warnings, saying Trump’s campaign promises and fear mongering about immigrants and Muslims echo sentiments that led to their imprisonment.

In closing, Trump told those gathered in the Capitol, “Your stories remind us that we must never ever shrink away from telling the truth about evil in our time…Each survivor here is a beacon of light, and it only takes one light to illuminate even the darkest space, just like it takes only one truth to crush 1,000 lies.”