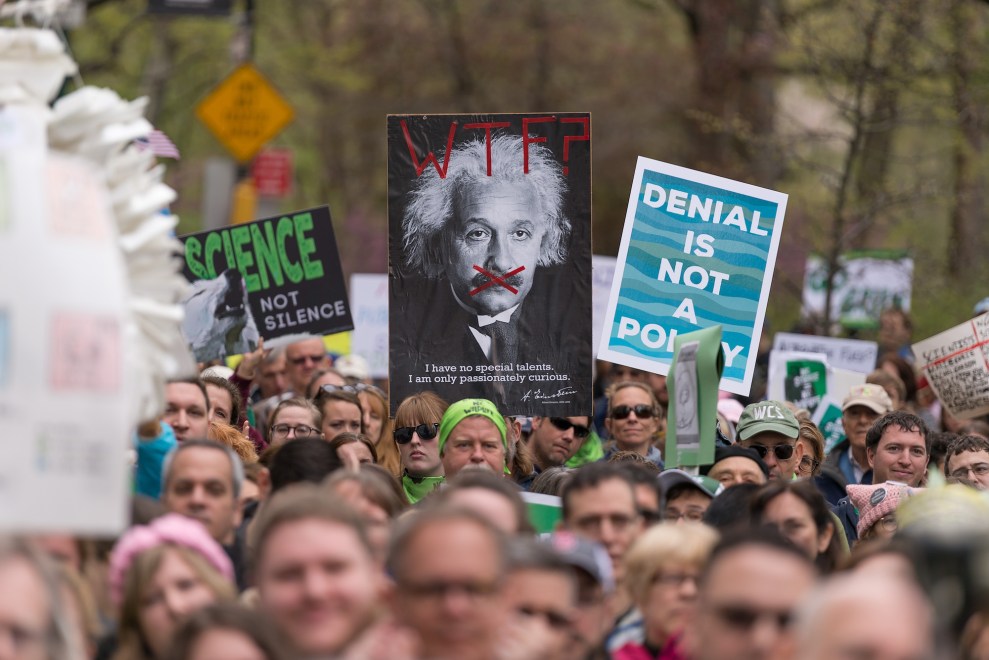 Amid the Trump administration’s plan to gut the Environmental Protection Agency, cut billions in scientific research, and eliminate science advisers’ role in the government, thousands of people around the world participated in marches for science Saturday to defend the role of science and evidence-based policies.

The marches, which coincided with the annual Earth Day celebration, have sparked debate within the scientific community over whether scientists should be actively engaged in political actions. Organizers for the marches say the event is nonpartisan—there is no mention of Trump on its website—but assert silence is no longer an option amid the threats posed by Trump and many of his advisers.

Mother Jones has three reporters on the scene, Pema Levy in DC, Jaelynn Grisso in New York, and Karen Hao in Los Angeles. For up-to-the-minute news on the marches, be sure to follow them, along with our rolling collection of updates below:

4:45 pm ET A few more scenes from the march in Los Angeles before we sign off:

“I disagree with every single thing he stands for” -Debbie Hooper (right) and Amanda Velasquez, NASDAQ editor #MarchForScienceLA pic.twitter.com/KUBfA50Odz

“Science is political, we just don’t want it to be partisan” — @BillNye at the #ScienceMarch pic.twitter.com/BDMDuublwJ

4:32 pm ET Humans weren’t the only animals marching for science today, as the dogged reporters at Buzzfeed revealed:

4:05 pm ET Here’s what scientists and their supporters had to say about the March of Science in New York, via Mother Jones digital fellow Jaelynn Grisso:

3:07 pm ET Trump weighs in on Earth Day for the second time today:

Today on Earth Day, we celebrate our beautiful forests, lakes and land. We stand committed to preserving the natural beauty of our nation.

“This is Princess Bubblegum from adventure time. She is a leader and a scientist.” -Ako Castuera, artist & animator #MarchForScienceLA pic.twitter.com/gsWg5nRboo

“Science and engineering is a really important part of our lives. We need to make sure it’s there for everybody.” #MarchForScienceLA pic.twitter.com/jWjbXURDtF

“I try to use my platform as a teacher to educate. This is saveable if we heed the evidence.” -Brittany Larson, soil scientist & professor pic.twitter.com/odKruw19XU

2:03 pm ET The crowds in Chicago, where more than 40,000 demonstrators are expected:

Big turnout in Chicago for the science march. 50K! pic.twitter.com/cQ5bZ00Bxm

Video shows crowds at the March for Science in Chicago from above https://t.co/OkodsQg7ZB pic.twitter.com/PwOBD4ieMR

1:30 pm ET Trump releases the following statement honoring Earth Day. While there was no direct mention of March for Science, the statement claimed “rigorous science” is essential to the president’s agenda.

1:05 pm ET While climate is the overwhelming topic of the day, many participants are also hoping to highlight other scientific issues at stake in the Trump era, including federal funding for medical research and the Flint water crisis:

.@MonaHannaA: “I am here to tell you that the Flint water crisis is not over” #EarthDay #ScienceMarch pic.twitter.com/P5C0gSqORT

Atmospheric scientists see worse than rain in the forecast pic.twitter.com/8hn43WfSaR

He is a microbiologist. He’s standing in the rain because politicians are ignoring science and global warming pic.twitter.com/VQ2WTAX1Fu

Mike Khan is a microbiologist at Washington State University. He said scientists are looking at issues like global warming and realizing they need to speak out publicly about the problem. “Science says we are going in some awfully bad places, and a lot of politicians are not willing to accept that,” he said. “I’m out here in the rain because I think that’s a problem.”

This physicist is mad about funding cuts to scientific research pic.twitter.com/GH4hE7r7qv

Dr. Laura Anderko studies the effects of mold, pesticides, lead, climate change, and other environmental hazards on children’s health, but says her funding is threatened. “Everything that we’ve done to save humanity goes back to science: clean water, clean air, all of that,” she said.

12:08 pm ET Despite the rain, many are still lining up in DC. The official march doesn’t kick off for another two hours:

He is a microbiologist. He’s standing in the rain because politicians are ignoring science and global warming pic.twitter.com/VQ2WTAX1Fu

Leland Melvin, a NASA astronaut turned wildlife advocate, was last in space in 2009, where he saw a planet that’s hurting. #marchforscience pic.twitter.com/7OaM1uwVlI

People are still pouring into the @sciencemarchnyc which started with a rally at 10:30. March to start at 11:30. pic.twitter.com/8yc9J2Bqs0

11:12 am ET While we wait for the march in New York to get started, here’s some suggested reading to supplement your March for Science activities:

Scott Pruitt claims he wants to help towns his policies will destroy. Like this one. https://t.co/djbYj4zVD5

Trump just appointed a chemical industry honcho to protect us from chemicals https://t.co/ZeAN3BAkGo

Getting scientists out of the lab and into the street is harder than it sounds https://t.co/pBEmA4R9xa

Bill O’Reilly reference at #ScienceMarch! Will, a physics & astronomy student, explained it’s the gravitational force of the moon. pic.twitter.com/VtUny8Yozt

Yes we even have scientists marching at the North Pole!!! They’re marching for climate action #marchforscience #globalsciencemarch pic.twitter.com/z6sN86Ll2k

9:37 am ET Crowds are beginning to gather in DC and other cities on the East Coast:

Currently at the #MarchForScience in DC. Weather is a bit gloomy but there’s a good early turnout. pic.twitter.com/LrmMAjX44l

9:25 am ET Happy Earth Day! Here are some greetings from underwater to kick off today’s events: