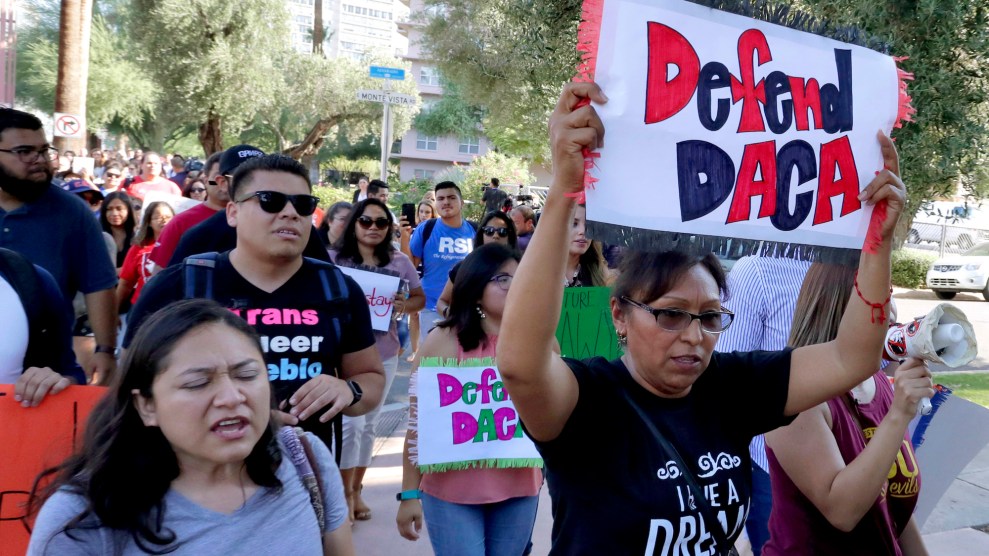 Protesters march to the US Immigration and Customs Enforcement (ICE) office in Phoenix in support of Dreamers.Matt York/AP

After moving to end protections from deportation for nearly 800,000 undocumented youths known as Dreamers, President Donald Trump said on Tuesday that he loves the young immigrants affected by his decision. “I have a great heart for the folks we are talking about,” Trump said, adding, “Hopefully now Congress will be able to help them and do it properly.”

But talking points put out by the administration tell a different story. Instead of instructing recipients of Deferred Action for Childhood Arrivals (DACA) protections to wait while Congress works out a legislative solution that gives them legal status, the talking points say Dreamers should prepare to leave to the country. The document states, “The Department of Homeland Security urges DACA recipients to use the time remaining on their work authorizations to prepare for and arrange their departure from the United States—including proactively seeking travel documentation—or to apply for other immigration benefits for which they may be eligible.” Multiple sources have attributed the document to the White House. It was sent to congressional Republicans, according to a source on Capitol Hill.

Leading immigration advocates said the White House is urging Dreamers to self-deport. Tom Jawetz, the vice president for immigration policy at the Center for American Progress, a liberal think tank, wrote on Twitter:

In WH talking points, DHS urges #daca recipients to prepare for self-deportation. Hopefully Rs on the Hill show more leadership than this. pic.twitter.com/G573GyPkEE

Earlier on Tuesday, the New York Times reported that, as late as one hour before Trump’s decision was announced, senior administration officials worried that the president did not understand the consequences of ending DACA and that if he learned about them, he would change his mind.

The administration talking points also suggest that Trump has a more optimistic view than some members of his administration of what ending DACA means. If Congress does not pass a bill to protect Dreamers by the March 5 deadline set by the administration, they could become subject to possible detention and deportation.

There is still the possibility that Trump will keep DACA after the program ends. A senior White House adviser told Politico he does not expect Trump to end DACA if Congress fails to pass a bill.

But at protests across the nation today, Dreamers and their allies made clear they’re not willing to see if Trump is bluffing. Real security, Jawetz and others have said, will come only if Congress passes legislation to protect Dreamers from deportation, such as the long-stalled DREAM Act. “We don’t need the Trump administration to manufacture new crises designed to terrorize immigrant communities,” Jawetz said on a call with reporters. “Congress must act now to take up a clean Dream Act and limit the harm that has already been done as a result of this announcement.”

Read the full memo below.

Below is a second messaging document that a source on Capitol Hill says was sent to congressional Republicans.