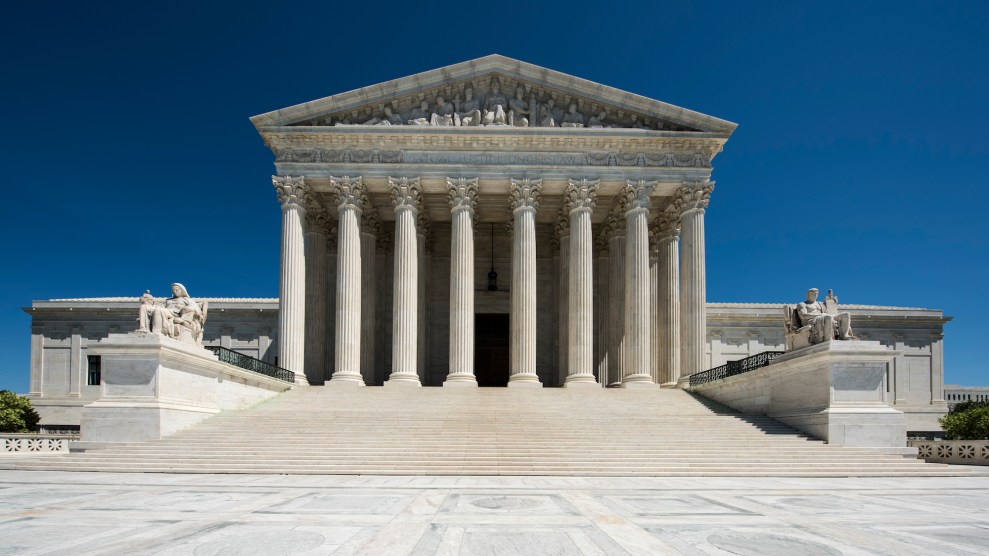 The Supreme Court has reversed a lower court decision holding that some detained immigrants have the right to regular bond hearings. The ruling sends the case back to the Ninth Circuit Court of Appeals.

The case focuses on three groups of immigrant detainees: asylum seekers fleeing persecution, people fighting deportation after serving a criminal sentence, and others who believe they have a right to enter the United States. Members of those groups spent one year in detention on average and, in the case of one individual cited in the case, nearly four years. There is now a backlog of more than 660,000 cases in immigration courts, according to the Transactional Records Access Clearinghouse, a nonpartisan project that tracks government data.

Justices Stephen Breyer, Ruth Bader Ginsburg, and Sonia Sotomayor—three of the Supreme Court’s liberal justices—dissented. Justice Elena Kagan did not take part in deciding the case. She recused herself last year after learning that she authorized a filing in the case while serving as President Barack Obama’s solicitor general.

Breyer stated in his dissent that two-thirds of asylum seekers and nearly 40 percent of those with criminal convictions go on to be granted the right to stay in the United States. He argued that the relevant statute, which does not call for mandatory bond hearings, should be construed so that it does not violate a person’s constitutional right to “liberty from arbitrary deprivation.” Breyer explained:

It is neither technical nor unusually difficult to read the words of these statutes as consistent with this basic right. I would find it far more difficult, indeed, I would find it alarming, to believe that Congress wrote these statutory words in order to put thousands of individuals at risk of lengthy confinement all within the United States but all without hope of bail.

Alito said the dissent “evidently has a strong stomach when it comes to inflicting linguistic trauma.” He argued that the statue clearly states that asylum seekers and others “shall be detained” while their claims are adjudicated.

Last year, the justices agreed to rehear the case after appearing to deadlock. That allowed Justice Neil Gorsuch, who President Donald Trump nominated last January, to vote in the case. The push to deny bail hearings to asylum seekers and others in immigration detention was also defended by the Obama administration.

The progressive Ninth Circuit could now rule that denying detainees bond hearings violates their constitutional rights. That would likely trigger another appeal. This time from the Trump administration.

The named respondent in the case was Alejandro Rodriguez. As Mother Jones wrote last year:

Rodriguez was a year old when he arrived in the United States. Twenty-four years later, he landed in immigration detention. In between, he’d become a permanent legal resident, a dental assistant, and a father.

But after being convicted for “joyriding” in 1998 and drug possession five years later, the Department of Homeland Security detained him in 2004. He went on to spend three years in immigration detention. As Mother Jones reported:

US Immigration and Customs Enforcement declined to release [Rodriguez] under supervision at four separate custody reviews. But about a month after Rodriguez filed the suit, the government let him go and used his release to argue (unsuccessfully) that the class certification was moot.

More than seven years after he was detained, Rodriguez received a cancellation of removal that allowed him to remain in the country. Ahilan Arulanantham, an American Civil Liberties Union of Southern California lawyer who argued the Rodriguez before the Supreme Court, told Mother Jones last year that “citizens with the same offenses as our class members are released in far greater numbers every day.”

Immigration judges often know that detainees will eventually be released, Arulanantham added. But they can’t release them on bail. “It shows the total pointlessness of the detention,” he said.