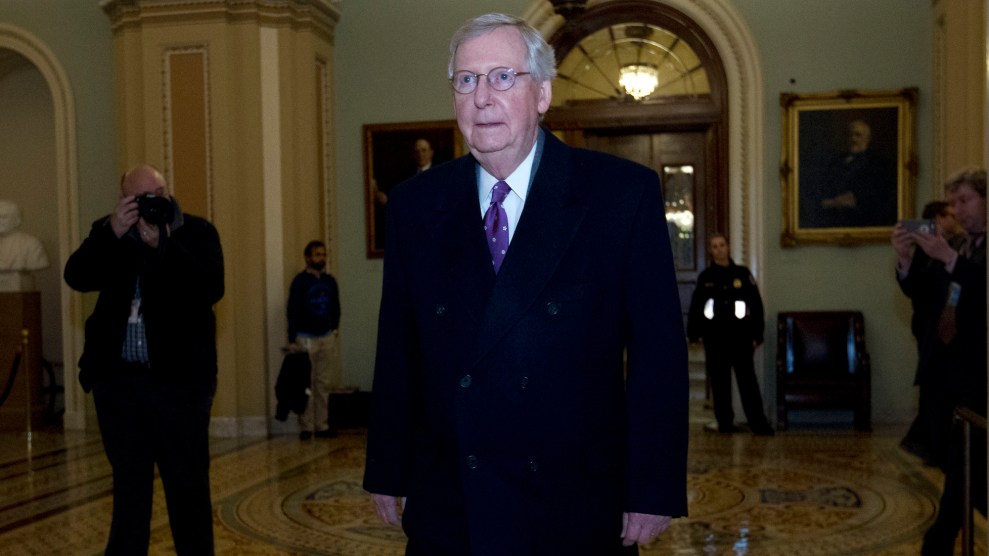 On Monday, hours before the Senate was set to begin an open-ended debate on immigration, Senate Majority Leader Mitch McConnell (R-Ky.) backed a plan released on Sunday by seven conservative Republicans. The plan follows President Donald Trump’s framework by offering a path to citizenship for some Dreamers—undocumented immigrants who came to the United States as children—at a steep price for future immigrants to the country.

The proposal, known as the Secure and Succeed Act, has three main goals: increasing border security, cutting legal immigration, and providing Dreamers with a path to citizenship. McConnell said on the Senate floor on Monday, “This legislation is a fair compromise that addresses the stated priorities of all sides.” He added, “It has my support.”

But the bill still has essentially no chance of passing the Senate, where at least nine Democratic votes are needed to overcome a filibuster. That’s because the plan contains several extreme restrictions on legal immigration. Here’s what the bill would do:

Block relatives from getting green cards

The United States currently awards green cards, which grant permanent residency and allow people to become citizens, to about 1 million people each year. About 800,000 of them are relatives of US citizens or permanent residents. The libertarian Cato Institute projects that Trump’s immigration plan, which is a model for the Secure and Succeed Act, would eventually cut that figure in half by blocking US citizens from sponsoring adult children, siblings, and parents, and blocking permanent residents from sponsoring any relatives. (Instead of green cards, parents of US citizens would be able to get visas that let them live in the United States as long as they don’t work.)

Trump and other Republicans argue that these changes would help the “nuclear family.” They tend to skate around what their proposals would do by denigrating “chain migration,” a term for family-based migration that has become a favorite among anti-immigration activists. Another argument is that it would make the US immigration system more merit-based, even though it would not create a longterm increase in green cards for immigrants with job-related skills.

The Republican plan would end the diversity visa lottery for people from countries with low rates of immigration to the United States. As Mother Jones has written, millions of people apply to get one of 50,000 diversity visas each year, and fewer than 1 percent are selected. Trump reportedly does not like the program because it disproportionately helps African immigrants from what he considers “shithole countries.”

Ending the diversity lottery, along with the cuts to family-based immigration, would reduce legal immigration by more than 450,000 people per year and send the US immigration rate to the lowest level since the 1970s. Cato estimates that Trump’s preferred immigration policies would have “banned at least 57 percent of all legal immigrants since 1965, nearly 23 million people.” (The full cuts to legal immigration would likely take more than a decade to come into effect because Republicans’ plan allows people who are already waiting for green cards to receive them.)

Give some Dreamers citizenship

In exchange for the cuts to legal immigration, Trump and his allies are offering about half of the roughly 3.6 million undocumented immigrants who came to the United States as minors a path to citizenship. Republicans say their plan will cover 1.8 million Dreamers who are eligible for DACA, but the actual number appears to be lower. The nonpartisan Migration Policy Institute estimates that only about 1.3 million Dreamers meet all of DACA’s eligibility requirements. The DREAM Act, a bipartisan bill that gave rise to the Dreamer label after it was first introduced in 2001, would cover about 1.7 million people after taking into account eligibility requirements.

To qualify for citizenship under Republicans’ plan, Dreamers would need to obtain a high school-level degree, remain in school or the workforce, and follow the law. DACA recipients could become citizens after 10 years, while other Dreamers would have to wait 12 years. That means that the oldest DACA-eligible immigrants would gain citizenship in their late forties.

Fund the wall and make it easier to detain immigrants

The plan would create a $25 billion “border trust fund” that Trump has said will be used to pay for a wall. It would end “Catch and Release,” the phrase Republicans use to describe policies that allow migrants to be released from detention while their immigration cases are adjudicated. Another provision would allow “expedited” immigration hearings for children who arrive at the border alone. Immigrant advocates have said similar proposals would “decimate” protections for child migrants.

The bill would also allow indefinite definition of immigrants with criminal records who cannot be removed to their home countries, increase criminal penalties for people who enter the United States illegally, and allow people who overstay visas—many of whom have been in the United States for decades—to be deported without going before an immigration judge.

In an unusual move, McConnell is allowing senators to craft legislation by tacking amendments onto an empty shell bill. What, if anything, will emerge from that process is unclear. It was almost certainly never going to be the White House framework that immigrant advocates labeled a “white supremacist ransom note.”

Yet on Sunday, Sen. Tom Cotton (R-Ark.), who is backing Trump’s approach, said the Secure and Succeed Act “is the only bill that has a chance of becoming law.” On Monday, McConnell said the proposal is “our best chance to producing a solution.” If that’s the case, it does not bode well Dreamers for who are hoping for legislative protection after more than a decade of failed attempts.