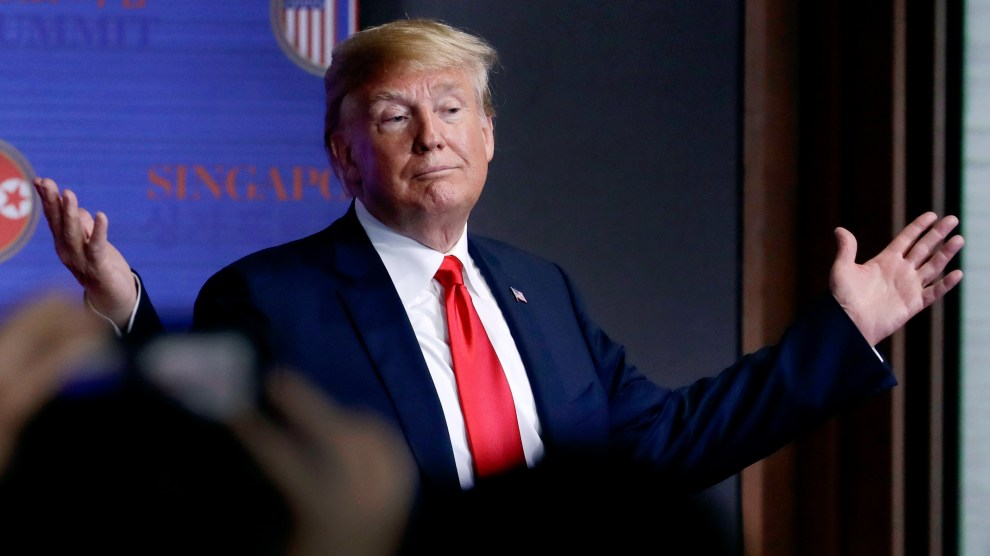 “It’s a rough situation over there,” Trump told reporters after the summit, perhaps trying to give a little context (and cover) to North Korea’s appalling human rights record. He added, “It’s rough in a lot of places, by the way. Not just there.” Without providing evidence, Trump said he believed Kim will ultimately end up helping North Koreans trapped in his country’s prison camps.

For Mother Jones DC bureau chief David Corn, giving Kim such a spectacular pass on running one of the world’s most brutal, oppressive regimes was enough to qualify Trump’s Singapore appearance as the second-worst day of the Trump presidency so far. (In David’s opinion, the worst came last May, when, after Russia had flagrantly interfered in the US elections, Trump jocularly hosted two senior Russian officials in the Oval Office—and then divulged highly classified information to them.)

“What makes the summit one of the top terrible days of the Trump years is not just the substance, or lack thereof, in the agreement,” David told Mother Jones senior editor Aaron Wiener during this week’s episode of the Mother Jones Podcast. “But in talking about the summit and meeting Kim Jong Un, Trump said the guy was ‘talented,’ he’s had to do a lot of rough and tough things, and he loves his people. Wait a second! This guy is one of the most brutal dictators in history.”

Trump wasn’t that much better on the substance of the deal, according to David’s assessment—but Trump was still able to wrangle what he wanted from the moment, via the world’s press and social media. “He got headlines and cameras shooting him and video and tweets,” David said. “That’s what he got. What did the US get? They wanted a promise of denuclearization from Kim, which he gave, but he’s also done that in 1993 and 2005.”

Elsewhere on this week’s show: MoJo reporter Julia Lurie talks with podcast host Jamilah King about her exclusive reporting on recently unsealed whistleblower lawsuits alleging scandalous tactics by a pharmaceutical company to push doctors to prescribe opioids—including taking them to strip clubs, paying kickbacks for more prescriptions, and posing as doctors’ representatives to get insurance companies to cover the drug.

Julia also takes you to the front lines of the epidemic outside Baltimore during an intense police raid on a suspected drug dealer, with Mother Jones filmmaker Mark Helenowski. The cops here in Harford County, Maryland, are trying to arrest every single opioid dealer—but as history’s deadliest drug epidemic intensifies, they are discovering that the line between dealers and users is increasingly thin. Julia and Mark’s reporting, detailed in the podcast, can also be seen in the award-winning Mother Jones documentary series Finding a Fix, which shadows detectives, politicians, and victims as one thing becomes painfully clear: There is no easy fix.

You can and subscribe using any of the following services: