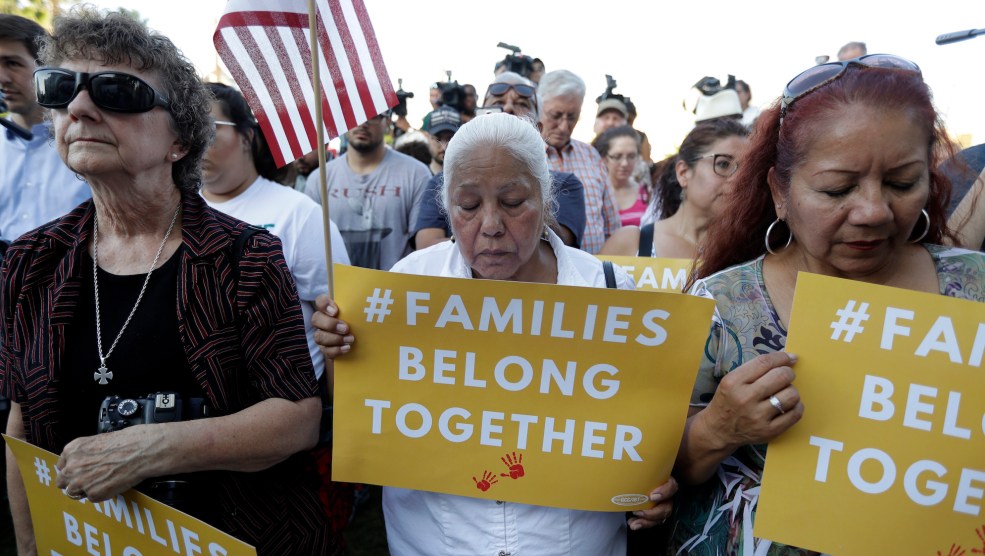 Demonstrators pray during a protest in May against the Trump administration's zero-tolerance policy that is separating families at the border. Eric Gay/AP

The top human rights official at the United Nations condemned the Trump administration’s “cruel practice” of separating parents from their children at the border, saying that the “thought that any state would seek to deter parents by inflicting such abuse on children is unconscionable.”

Speaking before the UN Human Rights Council on Monday, High Commissioner for Human Rights Zeid Ra’ad Al Hussein used his final address to the body to criticize a familiar list of failed states and authoritarian regimes, including North Korea, Syria, and Venezuela. But he added the United States to the list for forcibly separating nearly 2,000 children from their parents from April 19 to May 31.

Al Hussein joined US religious leaders, advocacy groups, Democrats, and a handful of Republicans in calling on the Trump administration to end the zero-tolerance policy that is causing the separations.

Al Hussein argued that people do not lose their rights when they cross borders without a visa. “I deplore the adoption by many countries of policies intended to make themselves as inhospitable as possible by increasing the suffering of many already vulnerable people,” he said.

In an unusual move, Al Hussein, a former diplomat and Jordanian prince, announced in December that he was not seeking a second term as the UN’s human rights chief. He stated that doing so in the current political environment “might involve bending a knee in supplication.” Al Hussein’s term ends in September.

Hungary, which is led by right-wing populist Viktor Orbán, was the only other country singled out for its treatment of migrants. Al Hussein said he was “deeply concerned” about a Hungarian bill that would essentially criminalize providing legal aid to migrants and monitoring human rights in border areas. In February, Orbán called for a global anti-migrant alliance, saying that “Christianity is Europe’s last hope.”

President Donald Trump congratulated Orbán over the weekend for forming a new government following his political party’s sweeping victory in April. A summary of the call from the White House stated, “Both leaders agreed on the need for strong national borders.”

On Monday morning, Trump attacked Germany and other European countries for allowing in migrants “who have so strongly and violently changed their culture!” He added:

We don’t want what is happening with immigration in Europe to happen with us!

Below is Al Hussein’s full criticism of family separation in the United States, according to the opening statement posted by his office:

In the United States, I am deeply concerned by recently adopted policies which punish children for their parents’ actions.

In the past six weeks, nearly two thousand children have been forcibly separated from their parents. The American Association of Pediatrics has called this cruel practice “government-sanctioned child abuse” which may cause “irreparable harm,” with “lifelong consequences”. The thought that any State would seek to deter parents by inflicting such abuse on children is unconscionable. I call on the United States to immediately end the practice of forcible separation of these children, and I encourage the Government to at last ratify the Convention on the Rights of the Child, in order to ensure that the fundamental rights of all children, whatever their administrative status, will be at the centre of all domestic laws and policies.