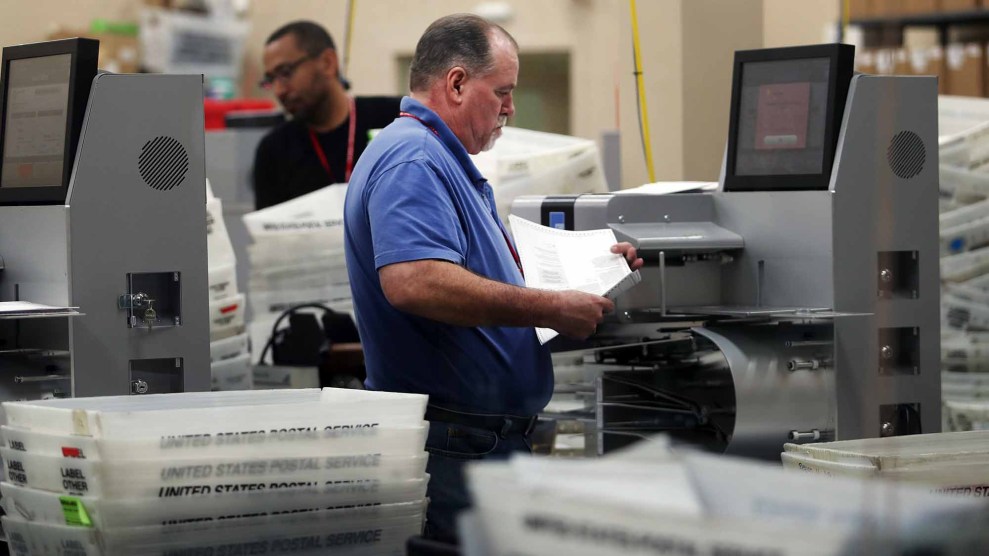 An employee of the Broward County Supervisor of Election's office counts ballots.Carline Jean/Zuma

As votes are still being tallied in Florida’s Senate race, lawyers for Democratic Sen. Bill Nelson and Republican Gov. Rick Scott are fighting over which ballots will be counted in Broward County, a large, Democratic-leaning county that could determine the result of a extremely tight race. On Saturday morning, a row of attorneys for both candidates and the two state parties watched as local officials scrutinized individual ballots to determine the voters’ intent—a contentious process in a fight that could come down to a handful of votes.

Florida law required all of its 67 counties to report their vote totals by noon in order to determine whether to call a recount in such a close race. Those results showed Scott leading Nelson by 12,562 votes, or just 0.15 percent of more than 8 million ballots cast. Broward County’s supervisor of elections, Brenda Snipes, submitted unofficial vote totals to the Florida secretary of state just before the deadline. But the drama in Broward is expected to pick up in the afternoon as lawyers for candidates on both sides of the aisle continue to battle ballot-by-ballot.

I’m at the Broward Supervisor of Elections office. Police have cordoned off the press. A few protestors from each party are outside. Lawyers for the Democrats and Nelson just arrived. pic.twitter.com/DxEa1gIwSd

The biggest battle at this stage is over a batch of 205 provisional ballots that as of Saturday morning were part of the total tally that Snipes reported to the secretary of state. Democrats are working to ensure they are counted in a final tally. However, lawyers for Scott plan to object to all of them being included in any final tally. Attorneys on both sides are gearing up to fight over the fate of those ballots as the margin tightens in the race. As of midday Saturday, the unofficial tally had 4,098,107 votes for Scott versus 4,085,545 for Nelson. That does not include military, overseas, and as-yet-counted ballots.

The contested 205 provisional ballots are the result of a election day glitch that prevented poll workers from verifying some voters’ registration. After the election, Snipes’ staff took these ballots out of their envelopes and tallied them. But Republican attorneys have objected, arguing that the three-member canvassing board should have first evaluated the envelopes that contained each provisional ballot, including matching signatures on the envelopes to the voters’ signature on record with the state. The board proceeded to do this, and determined 22 of them had mismatched signatures. Yet because the 205 ballots were now mixed together, it was impossible to separate the 22 from the rest. Democrats in Broward say some of the voters who cast those 22 ballots were at the Supervisor of Elections office on Saturday, ready to testify to their eligibility so their votes will be counted.

Scott’s legal team will fight the inclusion of these ballots. When a Democratic lawyer indicated during the morning’s session that he had a voter ready to testify, Bill Scherer, the attorney leading Scott’s legal team, objected. “Is she going to be subject to cross examination?” he asked. He argued that he should be able to cross-examine voters who cast a ballot twice. The Scott campaign has made allegations of people voting twice, though there is no evidence of widespread double-voting or any malicious intent. It’s more likely a handful of voters cast absentee ballots and then voted in person in order to make sure their votes were counted, according a Democratic lawyer watching the canvassing board.

“We’re doing everything we can do to make sure our client’s rights are protected, and that is that if there’s illegal voting going on, to challenge it and stop it,” Scherer told a group of reporters and protesters during one of the canvassing board’s recesses. Scherer insisted that fraud was tainting the election, echoing allegations made by Scott and President Donald Trump. “All we’re trying to do is to make sure that there are not illegal votes being brought in.”

Scherer insisted that none of the 205 provisional ballots should be counted. “They will never count if it mattered, never ever count, you can take that to the bank,” he said. “I’ve been a lawyer a long time, if I can’t win that, I will quit.” Scherer represented George W. Bush during the Florida recount in 2000.

Democrats believe it’s an easy call that the 205 ballots should count. Snipes, the election supervisor, has likewise argued that they should be counted so that the majority of the 205 that were considered legitimate by the board are not disenfranchised. “There’s been no evidence of fraud taking place here. We have no evidence of corruption taking place here,” said Leonard Samuels, an attorney for the Democratic Party of Florida. “But the allegations are out there are about fraud and corruption—show me. I’d like to see that.”

Scene outside the Broward County Supervisor is Elections is loud with protesters on both sides going strong pic.twitter.com/l3debBzAV6

As lawyers skirmished inside the supervisor’s office in the back of a large strip mall, protesters gathered outside. A group numbering over 100 supporting the Democratic candidates gathered early in the day, outnumbering the supporters of Republican candidates. A number of the Republican supporters talked about voter fraud. “Wanted,” one sign read, followed by an image of Snipes and and the words “Election Fraud.” The Democratic protesters called for counting every vote. “People do not need to be disenfranchised,” said Corey Thompson, who was demonstrating for the second day in a row. “Count every vote.”

A few hours later, the canvassing board examined voter intent on the county’s final 25 pages of ballots left for review. But because the unofficial results had already been sent to the state, attorneys for the Republican Party of Florida and Scott’s campaign argued that none of the 25 should be counted. A decision on what to do with those 25 had not been made as of 2pm.